Christian Pulisic, happy to be back with his friends 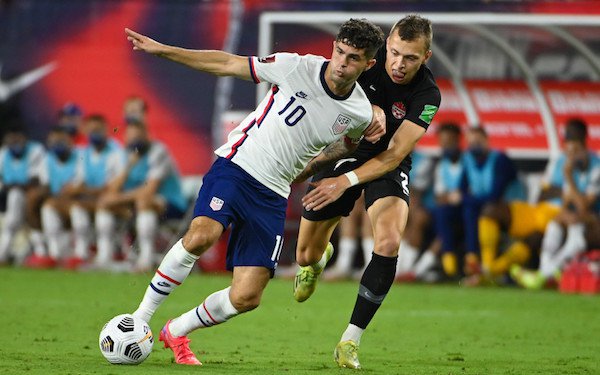 No player on the U.S. national team is under more pressure than Christian Pulisic.

At 17, he became the new hope of American soccer when he debuted for the national team shortly after playing his first game for Borussia Dortmund. He carried the USA throughout its World Cup 2018 qualifying campaign, scoring seven goals, but he was left in tears when it lost to Trinidad & Tobago, 2-1, in the final match of the Hexagonal -- he scored the only U.S. goal -- and was eliminated from the World Cup in Russia.

Since then, Pulisic has gone through highs and lows, both at Chelsea, at which he signed on a $73 million transfer fee in 2019, and for the USA.

He became the first American to win the UEFA Champions League in 2021 with Chelsea but has started just 45 of 100 games since joining the Blues. This season, he has rarely played in his favored position on the wing in a three-player attack.

Pulisic has been in and out of the U.S. lineup in recent years. In the Octagonal, he missed the opening game against El Salvador while he worked on regaining his fitness after testing positive for Covid-19 and being forced to isolate. An ankle injury forced him to skip the October window and limited him to short stints of the bench in November.

But he replicated his heroics in the Concacaf Nations League final, where his penalty kick in overtime gave the USA a 3-2 comeback win over Mexico, when he scored the winner off the bench in another 2-0 win over El Tri in World Cup qualifying in November.

This is Pulisic's third season at Chelsea for which he has scored only three goals in 19 games.

“It’s been up and down this year, for sure,” he said ahead of Thursday's match against El Salvador in Columbus. “Not exactly where I want to be and how I want things to be right now. But, yeah, I’m just going to keep going.”

Pulisic tried to put a positive spin on playing out of position.

“It’s tough,” Pulisic said. “I haven't always been playing in the positions I want to play in. But I think it’s a good quality to be versatile and to be able to play in all kinds of positions and have different strengths on the pitch. So, yeah, I’ve learned a lot and I think I’m ready to hopefully be in a spot in the next couple of games that I’m more comfortable in.”

The match against El Salvador is expected to be the first competitive game Pulisic has started with Weston McKennie and Tyler Adams, friends since their national youth team days together. So far, Pulisic, McKennie and Adams have yet to play together in qualifying with Sergino Dest and Yunus Musah, the USA's two La Liga stars.

"We have a lot of a lot of good talent, a lot of great players," said Pulisic, "so it's good to have all these guys in camp. It should help us a lot."

Pulisic clearly likes to be back with the national team.

"There's two sides of me," he said. "When people ask you how you are sometimes, there's the soccer side and then there's the the person side, so the person side is even more important for me. I'm doing alright in that sense, but it's always, when I come to the national team, it's how are things at Chelsea? What's this? What's that? And it's tough. It's tough. It's definitely played a lot on me and mentally it's been difficult at times, but I'm always very excited to come back with a national team and sort of step away and get to enjoy playing with these guys and get to just enjoying football in general."

americans abroad, men's national team
8 comments about "Christian Pulisic, happy to be back with his friends".
Read more comments >
Next story loading