Against a Honduran team that had already been eliminated from World Cup qualifying contention after going winless in its first 10 games, the USA scored early and won, 3-0, in sub-freezing Minnesota. (The USA won its Octagonal away game with Honduras, 4-1, in September in San Pedro Sula.). 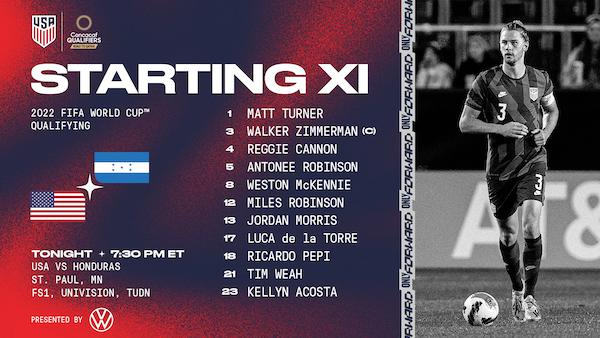 Matt Turner's biggest challenge was staying warm on an evening when goalkeeping wasn't necessary against a Honduran team that didn't get near the U.S. net.

Central defender Walker Zimmerman interfered high up field with Honduran's feeble attacks. He scored the USA's second goal with a close-range finish after overpowering defender Denil Maldonado (and surviving a VAR review). He was also credited with an assist because the ball bounced off his thigh to Christian Pulisic after shrugging off a mauling by Bryan Rochez. Zimmerman's central partner Miles Robinson was rarely called upon. Right back Reggie Cannon had little do on defense. His ventures at the other end included a crude foul on Diego Rodríguez in the Honduran penalty area when a clean tackle, or simply making a pass difficult for Rodriguez, could have created something for the USA. Cannon's combo work with Tim Weah improved in second half. Left back Antonee Robinson, whose forays weren't crucial amid the USA's possession dominance (73%), has yet to fine tune his longer passes. His highlight came when he stole the ball from Wisdom Quaye and laid it off to Weah for his just-wide 20th-minute shot.

Kellyn Acosta, in addition to defensive midfield duties, delivered the free kicks that Weston McKennie and Zimmerman turned into goals, and the corner kick that bounced fortuitously for Pulisic to stroke into the net. Acosta also lofted a nice pass for a Weah chance in the first half. Luca de la Torre, in his first U.S. start, sparked attacks by swiftly bringing the ball forward and passed precisely. Two of the three fouls he suffered resulted in the free kicks that led to the first two goals.

While the frontline starters failed to score, Acosta's corner kick wouldn't have reached Pulisic without Ricardo Pepi nodding it on. Pepi missed with a high degree of difficulty volley from a Antonee Robinson cross that arrived behind him. His other two shots also failed to test the keeper. The two of Tim Weah's four shots that were saved came with the goalkeeper at his feet. Weah's threats down the wing constantly troubled the Hondurans -- and included a brilliant combo with McKennie in the 50th minute. Weah won the corner kick ahead of the third goal. In the first half, Jordan Morris twice fouled unnecessarily when he was trying to pressure and he lost the ball frequently. In the second he managed to deliver a pass to Pepi, who shot wide. But when Morris had a clear shot with time to tee-up as he approached the penalty area, he hit it high and straight for an easy save.

Christian Pulisic was fouled on his first touch and scored with his second, a sharp strike that earned the USA a respectable margin of victory against the Octagonal's worst team. Brenden Aaronson stormed through the field to make the evening more miserable for a Honduran team with nothing to play for.

TRIVIA: Eleven games into World Cup qualifying, Weston McKennie's header was the first goal off a set play for the USA.