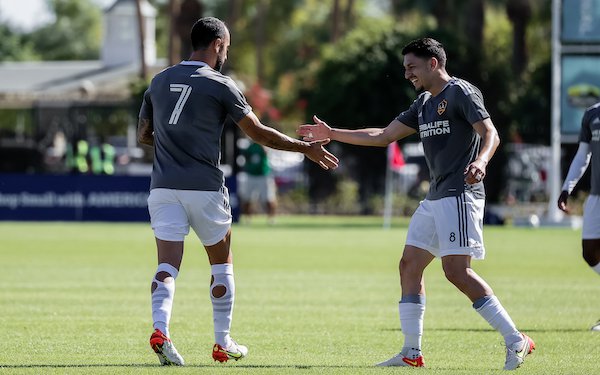 Greg Vanney heads into his second LA Galaxy campaign with a good idea of what he's got, in great contrast to last year, and reasonable expectations of what's possible.

It's his team, for real, this season, one schooled in the principles governing his “system,” knowledgeable in the realities of Major League Soccer, and mature in ways not possible in year one, no matter the presence of at least a half-dozen grizzled veterans. Last year was about immersion for too many of LA's most vital pieces; this year we find out what they're really about.

That's how it's supposed to work, and Vanney, a former Galaxy star who took Toronto FC to the title game in his second full season in charge (and to the MLS Cup/Supporters' Shield double the following year), can hardly wait to see what they achieve. He's been anticipating this to be a most dynamic attacking group, and that was before the arrival of Brazilian winger Douglas Costa, whose six-month-loan-into-midseason-transfer deal was finalized last week.

“There are levels of good, and he is at the top level of good,” Vanney said while introducing LA's new Designated Player. Costa, who won league titles in 11 of his last 12 seasons in Europe (the last six with either Bayern Munich or Juventus), “gives us a whole other level in our attacking capacity” and is meant to “tilt the bar to help us become a championship-caliber team.”

If everything else falls into place -- if wingers Kevin Cabral and Samuel Grandsir and striker Dejan Joveljic take expected leaps forward, if Rayan Raveloson's partnership with newcomer Mark Delgado solidifies midfield -- and the Galaxy can find a consistency so elusive in 2021, “then we'll give ourselves a chance to win a championship.”

The hope is that the Galaxy's attack will feast on a possession game regulated by Victor Vazquez (and increasingly Efrain Alvarez), but LA has the personnel to cause real damage on the counterattack. There are myriad options up and down the flanks and in front of Raveloson and Delgado, and Costa brings it all into sharper focus. If Javier “Chicharito” Hernandez can approximate last year's form (17 goals in 21 games, 0.88 per 90 minutes) but stay healthy, Vanney's could be a highlight-reel side.

“Douglas gives us another opportunity, because 'world-class player' means that, typically, your efficiency level goes up,” Vanney said. “You don't need 10 chances to score a goal, maybe you only need three. With the quality that he brings, it can only make more efficient on the attacking side and more dangerous.

“His ability to isolate and beat people on the dribble is something we've been looking for, and he brings it at the highest level, so all these things just make our group better. If we defend well, we're going to be a very good team.”

Most of the questions for LA deal with defensive play. The Galaxy suffered from mental lapses and fundamental errors last year, repeatedly losing balls in the worst places, and it cost them often -- they surrendered 54 goals, a total exceeded by only six teams, none with more than 33 points -- and, ultimately, kept them from the playoffs. The partnerships in the middle, both in midfield and at the back and all involving first-year MLS players, were frayed by acclimation and injury and, for center back Derrick Williams, a lengthy suspension.

Williams has missed much of preseason with a calf injury, so Vanney -- a former center back -- has primarily paired Sega Coulibaly with Nick DePuy in friendlies at the club's Carson complex and the past week at the Coachella Valley Invitational at the Empire Polo Club and sees greater transitional awareness and stronger connectivity among the back four. He's got options at both fullback slots -- Julian Araujo and newcomer Raheem Edwards getting forward into the attack or Jorge Villafaña and newcomer Kelvin Leerdam providing heady cover -- and is looking to integrate second-year homegrown middle Jalen Neal,  yet to see his MLS debut, into the rotation. Neal has seen increasing time in the early games. 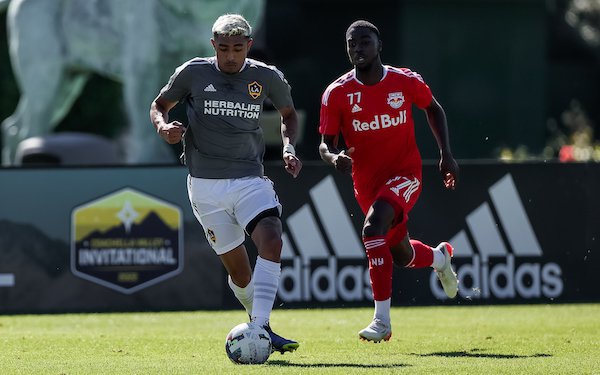 The Galaxy conceded four goals in a wild, one-goal victory over Toronto in their preseason opener but only twice in the four games to follow, in a 1-1 draw Thursday with the Seattle Sounders and 2-1 win Sunday over the New York Red Bulls in Indio, which is in Southern California's low desert, about 135 miles west of Dignity Health Sports Park. Both were good tests: The Sounders, who opened preseason early to prepare for Concacaf Champions League play, were effective in possession and pressured LA in its defensive third. The Red Bulls played an aggressively high line, looking to recover balls at midfield and in their attacking half.

Vanney has been pleased with what he's seen.

“I feel like the continuity of the group overall has been much better, which has made things easier for our center backs, but I think our center backs have also grown through their experiences,” he said. “As a group, we're just giving up less. That means, at times, too, we're better with the ball. I think we're less loose with the ball than last year [when] I thought we were our own worst enemy sometimes.

“Our reaction in transition, to collapse in close spaces so teams can't counter on us, and our collective movement defensively is something we've really worked on, and everybody's embraced it. We all know if we defend well, we're going to be a very difficult team to beat and to handle on the attacking side.”

Vanney, in charge of roster decisions following general manager Dennis te Kloese's departure to become CEO of Feyenoord in his native Netherlands, has space to “make moves,” is looking at “defensive” spots, in midfield and at center back, and could wait to see how things play out early in the season before deciding what is needed. Trialist Hamza Barry, a Gambian holding midfielder who last played for Hajduk Split and has been sidelined a year and a half following a torn anterior cruciate ligament, has been impressive but will need time to return to his full capacities.

The partnership between Raveloson and Delgado could be pivotal. They figure to play as twin central midfielders with differing qualities. Raveloson, who played almost as a second forward against the Sounders, has been effective going forward and scored five goals last year. Delgado, acquired in a trade with Toronto, makes the game flow and might be the most important new pickup.

Delgado, who grew up in the nearby San Gabriel Valley, emerged from Chivas USA's academy when Vanney was assistant to Robin Fraser and joined Vanney in Toronto in 2015. He's Vanney's guy, and Vanney loves him.

“Mark is one of those guys who can go under the radar or be underappreciated,” Vanney said. “He does so many little things that don't necessarily show up on the scoreline but really help a team in ways that are just immeasurable. He has an incredibly capacity and engine for work. With that, his ability to transition from attack to defending and defending to attack is, I think, as good as anyone in the league.

“It's a never a moment where he loses time. He's always ahead of the game, always on the clock, and he's super-aware. I call him the great balancer. He's a guy that recognizes when a space is empty, it needs go be filled. When defenders need help, he's always there to help. He just has this awareness and a capacity to cover ground. ... And he's a time-giver. His capacity to play in one-touch and give his time to other players, and his capacity to keep the game flowing so that the attacking players and the guys who get the assists and the goals, they get the ball when they need it so they can be effective [is excellent].”

Delgado is the glue that holds it all together, Vanney says, and that's something the Galaxy didn't have last year.

“It just feels like a very different group from where we were at any point last year, and this is the starting point for us this year.” Photos: LA Galaxy