The Czech Republic may never have qualified for a major tournament, but it proved adept at ultra-defensive, stifling, dour soccer in a scoreless tie with the USA on Thursday evening. Disappointing as it may have been that Coach Vlatko Andonovski's team couldn't translate 64% possession and 18 shots into a goal, the USA for much of the game looked good trying. 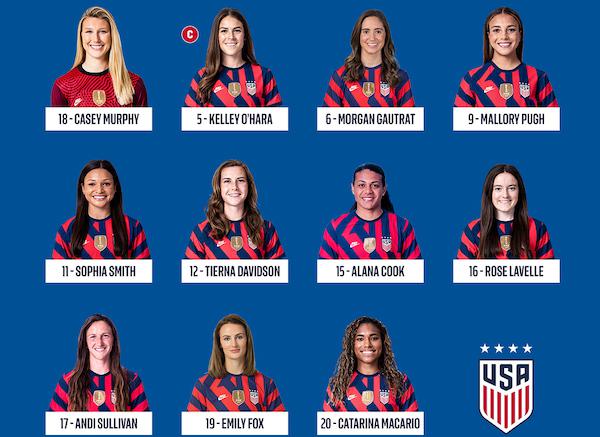 Although not seriously tested, Casey Murphy conveyed confidence when she grabbed a couple of high balls, held on to the Czechs' only shot on target, and showed how much of the goal she could cover when her finger tips reached a Klára Cahynová shot that flew over the crossbar.

Alana Cook combined her commanding presence in the central defense with a sharp passing acumen like that of partner Tierna Davidson, which enabled USA to attack in a variety of ways during the first half. Right back Kelley O’Hara made a case for being one of the veterans who still has a future with the squad with her early attacks that tamed the Czechs. In the second half, she set up a Trinity Rodman header, but she also wasted crosses with time to pick out a target. Left back Emily Fox was subbed at halftime after a decent performance that included a lightning quick attack down the flank.

If Rose Lavelle had hit the net with one of her shots — her clever first-half lob went just high, she shot wide in the 66th minute, and took a very narrow angle, easily saved shot with Rodman in position for a ripe chance — it would have been a terrific performance. She had orchestrated some innovative offense in the first half and delivered thrills like when she roasted Anna Dlasková on the right flank. Morgan Gautrat stealing balls in midfield kept the Czechs under major pressure and she seemed on the verge of finding a rhythm with Mallory Pugh and Fox before she and Fox were subbed at halftime. Andi Sullivan swept the midfield to keep the Czechs pinned in, but against a bunkering opponent more creativity in the middle was needed.

Sophia Smith's dribbling played a major role in why this post-Olympic team has been fun to watch. But she, like Catarina Macario, who did well to make herself available for passes and controlled the ball under pressure, came up short on a forward's most important task: making an impact on the scoreboard. Mallory Pugh troubled the Czechs early in each half but of three frontline players was the least successful at getting on the ball.

These being the first games of the year for every player except Macario, Andonovski said afterwards all his players are on schedules to play limited minutes. He treated the opening game like a scrimmage — sending in two players at halftime, two more at the hour mark, and another couple at the 72nd mark. Not that the subs performed poorly, but considering how well the team played in the first half, breaking up the cohesion may not have been the best way to break down the Czechs. Kristie Mewis sent a perfect pass to Trinity Rodman after a brilliant midfield move — but Rodman was wrongly called offside. Rodman, in her debut, should have scored on a close-range header. Margaret Purce hit an amazing cross-field pass. Emily Sonnett set up a header for Mewis that was saved. Becky Sauerbrunn tackled cleanly to end a Czech counterattack following a late U.S. corner kick. Amid the most frustrating part of the USA's play — as it sought the late game-winner — Ashley Sanchez indicated she'd be intriguing to see as a starter.