Coming off a 0-0 tie despite dominating the Czech Republic on Thursday, the USA in Sunday's clash with New Zealand was up 2-0 within six minutes and 3-0 at the halftime en route to a 5-0 win. Incredibly, the first three goals were own goals by the same player. The final goal, from Mallory Pugh in stoppage time, came after the USA had been playing with 10 following the 80th-minute injury to Trinity Rodman. 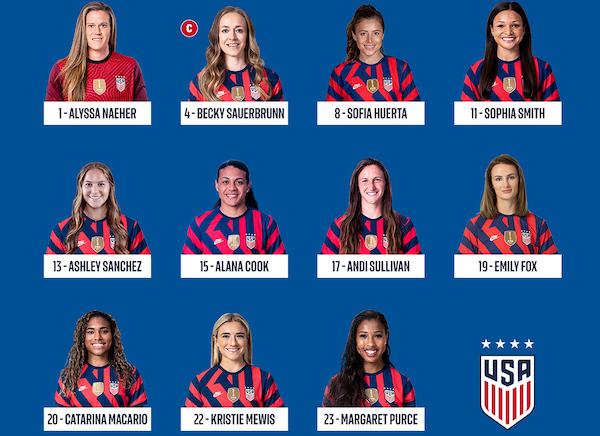 Alyssa Naeher started off with an awful boot out of bounds after a back pass from Alana Cook. She also struggled with distribution in the second half, tossing the ball to a New Zealander and seconds later kicking the ball to a foe. She was only called on to make two easy saves, but in the 45th minute snagged a high ball amid a crowded goal area.

Central defender Alana Cook, who made stifling New Zealand attackers look easy, also passed cleanly, including the deliveries to Sofia Huerta on the second goal and to Midge Purce ahead of the third goal. Cook's central partner Becky Sauerbrunn, who came off at halftime, passed the ball to Cook on the latter. Left back Emily Fox sent the pass to Sophia Smith leading up to the opening goal, the first of Meikayla Moore's own-goal hat trick. Huerta, whose cross created the second goal off Moore's head via Purce's, assisted on the USA's fourth goal with a perfect cross. Both outside backs spent much of the game attacking and passed shrewdly.

Central midfielder Andi Sullivan defended well in midfield as she did against the Czechs on Thursday but against New Zealand added a playmaking component. She took the quick free kick ahead of the first goal and sent accurate passes to both wings, including a a nicely weighted long-range chip to Smith late in the first half. Ashley Sanchez's quick dribbling upfield was a major part of the U.S. attack that kept New Zealand on its heels, but she passed inconsistently and shot wide in the second half on a solid chance. She took part in the buildup to the USA's second goal after winning the ball. Kristie Mewis was fouled for the free kick on the first goal and played a big role in the U.S. midfield's cohesion.

During her 45 minutes, center forward Catarina Macario contributed to the USA's possession in New Zealand's half and hit the post from close-range from a difficult angle. Sophia Smith's cross created the first goal. Her runs kept New Zealand on edge (before being subbed at halftime) and she was fouled for the first of two yellow cards for New Zealand, which would have seen more from a less lenient or more astute referee. Midge Purce helped create the second and third own goals. She combined her formidable one-on-one skills with measured passing instead of the hopeful crosses one sees too often from wingers. (Purce was subbed in the 56th minute.)

Ashley Hatch scored six minutes after coming on at halftime and assisted on Mallory Pugh's well-taken goal -- a crisp shot after dribbling away from defender Claudia Bunge, who had earlier committed a yellow-card foul on Pugh. Lynn Williams kept pressure on the backline after replacing Smith at halftime. Trinity Rodman was hit hard twice, the second blow forcing her off the field in the 80th minute. In between, she squandered a prime chance at the edge of the goal area and was robbed in midfield amid a promising counterattack. Tierna Davidson set up Sanchez's big chance.

TRIVIA: New Zealand head coach Jitka Klimkova, a native of the Czech Republic, coached the USA at the 2020 U-20 World Cup (a group stage exit).