U.S. Soccer and USWNT players settle: 'The right moment for the players to agree to something that we are really proud of'

The legal fight between U.S. Soccer and U.S. women's national team members, which began almost six years ago, is ending.

Less than two weeks before oral arguments were scheduled to be heard in the appeal of the equal pay lawsuit, the parties announced an agreement to resolve the outstanding claims in their litigation in the U.S. district court in Los Angeles.

The parties have agreed to resolve the equal pay claims for a total of $24 million:

-- U.S. Soccer will pay $22 million to the players in the class-action lawsuit. This amount will be distributed in a manner proposed by the USWNT players and approved by the district court.

-- U.S. Soccer will also pay an additional $2 million into an account to benefit the USWNT players in their post-career goals and charitable efforts related to women’s and girls soccer. Each player will be able to apply for up to $50,000 from this fund.

The settlement is contingent on the ratification of a new CBA for the USWNT and then approval by the district court, where the lawsuit was originally filed.

In May 2020, Judge R. Gary Klausner granted partial summary judgment to U.S. Soccer on the equal pay claims. U.S. Soccer and the women's players in the class-action suit later reached a settlement on other claims related to working conditions such as charter flights, hotel accommodations, support staff and venue selection.

It’s been a long arduous journey. But todays news makes me really emotional and happy. Well done to the USWNT players for changing the game for everyone who comes next.
Also, Love this photo https://t.co/LROF44CEHS

There had been settlement proposals, dating back to before the contentious filings by U.S. Soccer in district court that resulted in the decision by U.S. Soccer president Carlos Cordeiro to resign on March 12, 2020, elevating vice president Cindy Parlow Cone to the presidency.

Since her first media call days after she took over for Cordeiro, Parlow Cone emphasized her desire to seek an out-of-court settlement. In her recent interview with Soccer America, she reiterated her desire to end the litigation "because I don't think that this litigation is good for U.S. Soccer or soccer in the U.S."

Oral arguments on the appeal before a three-judge panel of the 9th U.S. Circuit Court of Appeals were scheduled for March 7 in Pasadena, California.

The settlement amount is a little more than a third of the damages of $66.7 million -- including interest -- experts for the women estimated they should receive for their claim under the Equal Pay Act and Title VII of the Civil Rights Act of 1964. But a settlement is likely a "win" for the women, current and future players, regarding better terms to a new CBA. 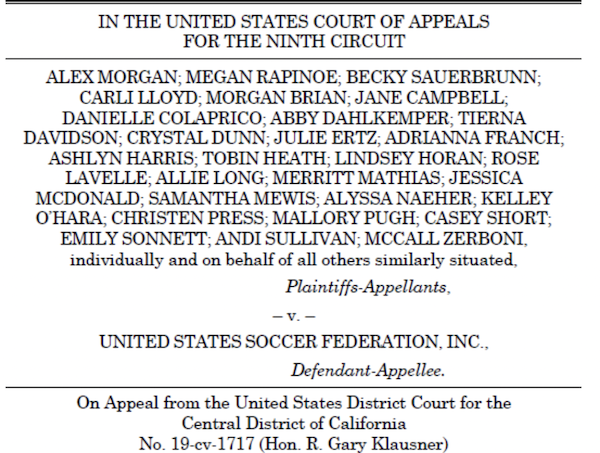 If the Court of Appeals had overruled Judge Klausner’s ruling, the case would have returned to the District Court for trial. Absent a settlement, the case could have dragged on into 2023 and beyond. For the players, the prospect of losing the appeal and receiving nothing was likely an important factor in the decision to settle and not pursue a precedent-setting ruling.

Oral arguments were scheduled two days after U.S. Soccer's National Council Meeting at which its members will vote to elect a president to carry the federation through the buildup to the 2026 World Cup that the USA will co-host with Canada and Mexico. The settlement will certainly boost Parlow Cone's chances of winning her first full term as president in her race with Cordeiro, but the new structure of the voting membership that increased the Athletes' share of the vote from 20 percent to 33.3 percent already made Parlow Cone the favorite.

Alex Morgan, who is a member of the Athletes' Council, said there had been lots of work behind the scenes to get to a settlement.

"We inched towards this moment, for months and months and months," she said on a media call on Tuesday evening. "And it became the right moment when Cindy was able to push this along and the right moment for the players to agree to something that we are really proud of. With the election coming up, I wouldn't say that for the players, this was a moment where we needed to push something across the line. I think that we were eager to get equal pay every single day, starting six years ago. And it happened today and we're really proud of that."

The current and former national team players gathered this weekend in the Los Angeles area, where the U.S. national team played its first two matches in the SheBelieves Cup, providing an opportunity for them meet together for the final days of talks related to a settlement.

"We've been fighting for a very long time," added U.S. captain Becky Sauerbrunn, another member of the Athletes' Council. "And yes, there's an election coming up, but we're also at SheBelieves, and we also had oral arguments coming up as well. So there were a lot of factors, but we've been fighting for this for six years now, since we filed that first EEOC complaint."

A settlement doesn't clear U.S. Soccer's plate of litigation that has cost it ten of millions of dollars to defend -- the NASL's suit against U.S. Soccer, now in its fifth year still has not yet gone to trial, and there's not yet finality to the Relevent suit challenging the federation's right to block foreign leagues from organizing competitive matches in the U.S. market -- but it allows the federation to concentrate on other pending matters.

They include reaching an agreement with the men's and women's national team player associations on new collective bargaining agreements. (Sam Mewis, one of the women's player representatives, said there have already been 35 bargaining sessions.) The settlement announced on Tuesday being contingent on a new CBA with the women certainly helps that process. U.S. Soccer formally made providing an equal rate of pay going forward for WNT and MNT players in all friendlies and tournaments, including the World Cup, part of the new CBA between U.S. Soccer and the USWNT.

U.S. Soccer faces unprecedented activity in the first part of 2022, including the men's national team's possible qualification for the World Cup in Qatar and an announcement on the host cities for the 2026 World Cup, which will put that tournament front and center in the minds of U.S. fans wishing to attend and businesses wishing to be involved.

The Sally Yates investigation into abuse in the NWSL and who knew what and when about the behavior of coaches won't be completed until later in the year, but many of the USA's biggest stars recently pressed Parlow Cone and Cordeiro, demanding accountability from the federation for abuse in women's and girls soccer and asking what steps they will take immediately to protect girls and women playing soccer.

"It is taken a lot of time, a lot of resources, both monetary and people's time to get to this point," said Parlow Cone. "So now we can shift that and focus on all [these] things, growing the game or working with FIFA to equalize World Cup prize money, World Cup '26, and making sure that every one of our members benefits from World Cup '26, and that we make sure it's impacting all 50 states. There's a lot that we have going on at U.S. Soccer. We can shift our focus to fully on the CBA negotiations, which Becky said the players have been fully engaged in and are going quickly. It's just a really complex. CBAs are just complex by nature. And so it takes a long time to get through them. But I think this is a great moment, and I think this does allow us to start to shift our focus from fighting to working together, to achieve all the things that we want to achieve."

women's national team
50 comments about "U.S. Soccer and USWNT players settle: 'The right moment for the players to agree to something that we are really proud of'".
Read more comments >
Next story loading