Yet again -- another protocol farce, this one from Leeds

No. Heading is not the culprit this time. The ball was at waist height as Koch and Manchester United's Scott McTominay raced to control it in midfield. The two men collided at the shoulder and head level. The head contact looked frightening. In a later report on the game, the Daily Mail used the word “sickening” to describe the head clash.

Koch went down immediately and referee Paul Tierney was quick to stop play and get medical help on the field for Koch. He was treated on-field for about three minutes — most of the treatment involved heavy bandaging of Koch’s head, needed to staunch the blood flow from an eyebrow cut.

Koch was taken off the field to change his shirt and shorts, but quickly returned to play. Leeds later insisted that Koch had passed all the on-field concussion protocol tests, a claim that left many wondering just how the tests were administered in the midst of the frantic bandaging activity.

Some 12 minutes later, Koch sat down on the field. Again he received treatment, but this time he had difficulty standing up. He was eventually led off the field, looking clearly unsteady.

To repeat: this was not a “heading incident.” It did, though, involve exactly the sort of injury that occurs when opposing players clash heads in a battle to head the ball. And it tells us a lot about the sport’s attitude to head injuries. 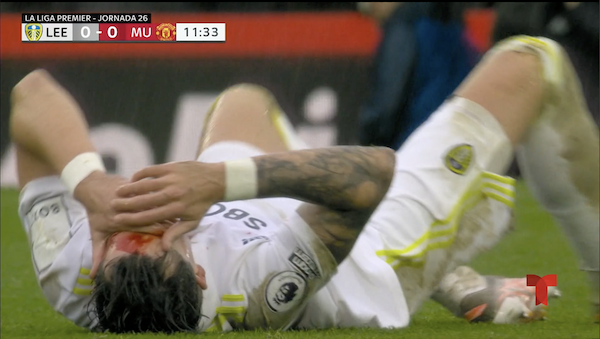 The way in which this Koch episode was handled shows, yet again, that soccer — even at the elevated English Premier League level — is still not taking concussion injuries seriously.

Leeds coach Marcelo Bielsa offered an explanation: that Koch was bleeding heavily and that this was the serious issue that had to be dealt with at once. For a coach that might just about seem reasonable ... but where were the Leeds medics? How could they allow a spectacular blood-flow to obliterate all thought, never mind action, on the concussion issue?

The idea that the much vaunted protocol could be reduced to about six questions is frankly disturbing. And the idea that a player, on the basis of six hurried answers, should be sent back into a hotly contested game is simply appalling.

Has soccer’s concussion protocol been drawn up without reference to the dangers of SIS? That is “second impact syndrome,” which warns of the dangers of a second concussion, occurring soon after the first. The Wikipedia entry for SIS makes for harrowing reading — thus: “Second-impact syndrome (SIS) occurs when the brain swells rapidly, and catastrophically, after a person suffers a second concussion before symptoms from an earlier one have subsided.” Under Prognosis, comes this: “The mortality rate for SIS approaches 50%, and morbidity (disability) is almost 100%.”

Yes, the condition is rare, but the risk is considerable. What happened in the Koch case is a shocking proof that soccer is paying scant attention to SIS.

The problem with the protocol, right from the start, has been its rigidity and the aura of scientific infallibility that it projects. Looking at the Koch case, does one have to have a medical degree and an elaborate set of tests to know, very quickly, that this is a highly dangerous situation? When the clash is frightening to witness, when it warrants the word “sickening,” does not plain common sense tell us loudly enough that this player should be quickly removed from the game?

The scariest aspect of the Koch episode is that it underlines the extraordinary indifference that soccer continues to maintain in the face of growing evidence that concussion — and the wider field of head injuries — present a major problem for the sport, one that is not going to go away.

Far from it. Out there, in the global sport of soccer, in surroundings far less fashionable than the English Premier League, there must be thousands of stories of careers — and of lives — wrecked by head injuries. Sad stories from obscure places that remain ominously untold.

No, the Koch injury cannot be seen as an indictment of heading. But it very definitely reveals, with highly disturbing clarity, that soccer’s leaders have yet to realize the seriousness of the crisis they face.

england
6 comments about "Yet again -- another protocol farce, this one from Leeds".
Read more comments >
Next story loading