In an all-around impressive and entertaining performance, the USA earned a 5-0 win over Iceland, which entered the game on a six-game win streak and hadn't conceded more than two goals since a 4-0 loss to France, 22 games ago, in April 2019. Mallory Pugh and Catarina Macario each scored twice and combined brilliantly on the fourth goal. The win made the USA the 2022 SheBelieves Cup champion. 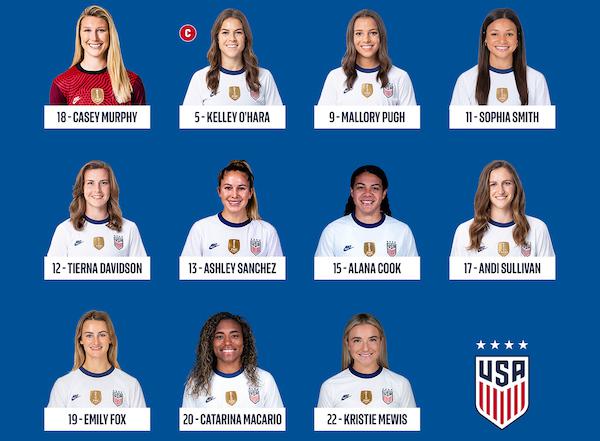 Casey Murphy's only save was a shot down the middle, but she snagged a couple high balls amid a crowd. She distributed very well, even when under pressure, hitting several accurate medium- and long-range passes. When she came well off her line to grab a high free kick, she quickly threw the ball to Mallory Pugh to start a counterattack.

In the 2nd minute, Alana Cook stole the ball from Dagny Brynjarsdóttir and maneuvered out of danger -- one of the times the backline coped well with Icelandic pressure and built out of the back. In the 3rd minute, Cook started a sequence via Emily Fox that led to a Pugh shot. She won the ball on a tackle to help pave the way to the USA's first goal.  Cook's central partner, Tierna Davidson, also defended adeptly and passed crisply, like during the buildup to the second goal after she smoothly evaded Agla Albertsdottir. Right back Kelley O’Hara allowed a dangerous pass by Albertsdottir in the 32nd minute but otherwise defended solidly. Offensively, she over-hit a chipped pass that went straight to the keeper in the first half and early in the second half shot far over the goal on a ripe chance. Left back Fox combined well with the attackers on her side and shut down Sveindís Jónsdóttir with some clean tackles.

The only thing Ashley Sanchez came up short on during her dynamic display that wreaked havoc on Iceland was converting one of her shots, like in the 75th minute when she juked past Glodis Perla Viggosdottir in the penalty area but shot well within keeper Cecilía Rúnarsdóttir's reach. After Sanchez set up Kristie Mewis for a seven-yard shot that went wide, she floated a pass into Catarina Macario's stride to assist on the first goal. Sanchez also assisted on Pugh's first goal, the third goal. Mewis fed Pugh during the buildup to the second goal and scored the USA's final goal. With Sanchez and Mewis attacking effectively, central midfielder Andi Sullivan played a more defensive role, but her 22nd-minute pass to Pugh created one he best chances that didn't result in a goal and she helped connect the backline to the front, as during the second goal counterattack.

After struggling to break through a penalty area crowded with Icelanders, Catarina Macario tried from long-range and curled in a beauty from the edge of the penalty area that went in off the far post. Shortly after that, she scored a second with a clever chip. Besides the flair that reminded us of her Brazilian roots, Macario offered herself to midfield passes and fended off close marking to relay the ball -- as she did ahead of the third goal -- and pressured the goalkeeper on back passes. Macario won the ball in midfield before the give-and-go with Pugh on the fourth goal. Sophia Smith contributed plenty to the frontline trio's waves of attacks. In the 73rd minute, she flew past Iceland's left back, but instead of feeding a wide-open Macario she shot too close to Rúnarsdóttir from a more difficult angle.

The first subs were made in the 80th minute, including Midge Purce, who evaded two defenders on her assist to Mewis.

NOTABLE: Seven of the 11 starters for the USA were under the age of 25, a lineup that was the USA's youngest in SheBelieves Cup history at 25.40 years