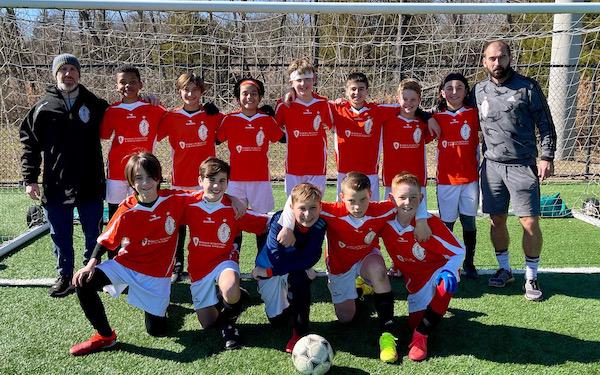 Soccer has given Jonny Sinclair many things: joy, purpose in life, a wife and kids.

But when he went looking for a competitive club for his 8-year-old son, soccer gave Sinclair something else: a glimpse at the increasingly expensive arms race that is now the American youth game.

Sinclair grows animated when he talks about his favorite sport. The son of a Royal Air Force soldier, he grew up on military bases in Germany and England. Soccer helped him make friends, be active and have fun. It earned him a ticket to the USA when he was 22, as a staff coach for New York/New Jersey MetroStars summer camps.

He expected to stay for two months. But an offer to become director of coaching for a small club in Elmira, New York, turned into a nine-year assignment. Sinclair got involved in the Olympic Development Program, and worked his way up the coaching ladder.

In 2014, with a young family, he traded his clipboard for the more secure profession of life insurance. He got a job in Charlotte, North Carolina, and – when no other volunteers stepped up – began coaching his oldest boy in a YMCA recreational program.

The core of the team was very good. By 2019, many had outgrown the level of play. Sinclair told parents he’d contact area clubs, to find the best next step for them.

“There was nothing close to affordable,” he says. “They were all in the $800 to $1,000 a year range.” To his surprise, that was it: recreational or expensive soccer, with nothing in between.

So Sinclair created his own club. The cost to play: zero.

He wanted his teams – the Matthews Mavericks -- to be competitive. But he did not want to replicate the competitive club model. There would be two seasons, spring and fall, with one night of training a week, on Mondays. Fridays were reserved for “pickup soccer.” Matches were played on weekends. 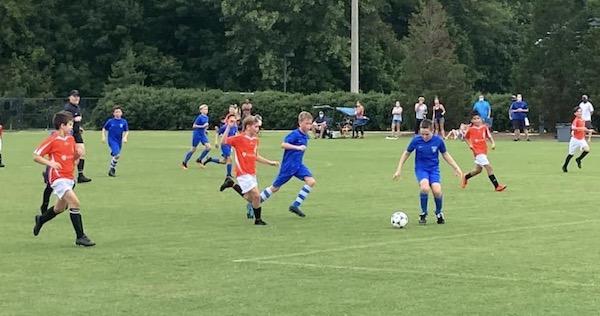 The Matthews Mavericks debuted at the completive level two years ago.

The pickup games are Sinclair’s special pride. He drops a bag of balls, pinnies and cones, and tells the kids: ”Go play.” For two hours, they do just that: World Cup, 1-v-1; 11-v-11. Leaders emerge; skills are honed – all without coaches.

The Mavericks are free because Sinclair and his wife, Alise, an art teacher, keep a close eye on costs. Players wear a basic training T-shirt; game jerseys and shorts are bought at clearance online. “Kids don’t need a $300 uniform they’ll outgrow in a year,” Sinclair notes. “Those are fees on top of what it costs to play. They could price families out of the game.”

All three boys and three girls teams share one training field. “We don’t need to pay for six separate fields. We wouldn’t use all that space anyway,” he says.

Cost-consciousness is key. “Any time we can make a common-sense decision about spending, we do it.” That includes limiting the number of tournaments, particularly those far from Charlotte.

The biggest expenses are field rentals, league fees, referees and insurance. Funding comes from a local couple whose grandchildren play in the club (their Business Acquisition and Merger Associates logo is on the jerseys), an Atlanta foundation, sponsors, and other donations. 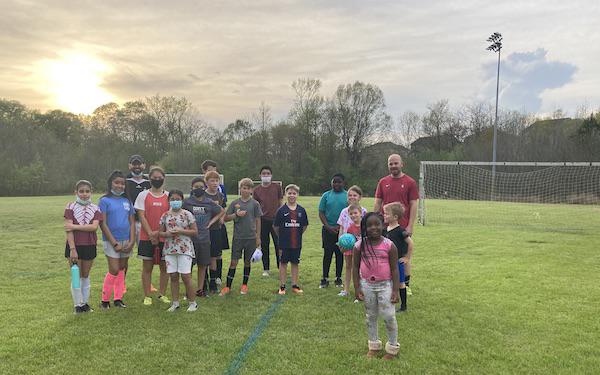 At one of the Matthews Mavericks' rec program pickup nights, Jonny Sinclair realized the players represented 15 different nationalities between their different heritages.

If individual teams want extra training, the Mavericks provide it. That cost is borne by the parents. A scholarship fund covers those who cannot afford it – no questions asked. “We don’t ask for financial forms,” Sinclair says pointedly.

The founder knows that his model is not scalable much beyond the current six teams. Then again, he’s not trying to create a super club. He just wants to provide an opportunity for youngsters to play the game with friends, be inspired to improve on their own, and develop a life-long love of soccer. And Sinclair is clear: “This won’t tick all the boxes for every parent.”

His model was not embraced by many league and club administrators. He searched for a league to join. There was always red tape. Finally the Carolina Champions League accepted them. Sinclair calls their flexibility with double rostering “a key reason we’ve been even half successful.”

The Mavericks have certainly succeeded. Teams win half or more of their matches, often to the surprise of their opponents. In their first season, the U-10s won every game.

Maverick players, meanwhile, revel in their underdog status. “Once you step over the white line, it’s an even playing field,” says Sinclair. “It’s not just the more you pay, the better the club is.”

Some players outgrow the Mavericks. When they do, Sinclair helps them find another club that’s the best fit. He proudly describes a U-13 boy who recently joined the Charlotte FC academy program.

But for most Matthews Mavericks, their in-between status – beyond recreational, but without the pressures and costs of a highly competitive club – is perfect.

Sinclair says, “My goal is not to be the best club in North Carolina. It’s to create an environment where, when these kids are 40 years old, they still play and love the game.

“I can’t imagine my life if I’d been outpriced of soccer as a boy. Soccer has been the greatest joy of my life. I’m glad I can dedicate as much of my time as possible to it.”

youth
5 comments about "Jonny Sinclair on breaking the pay-to-play barrier in North Carolina with the Matthews Mavericks".
Read more comments >
Next story loading