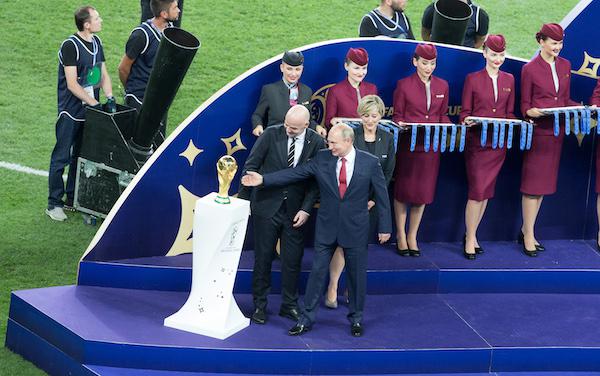 The soccer world agreed at the weekend that war is a terrible thing, and Russia's illegal and murderous invasion of Ukraine must be condemned by all decent nations and people. It's good to know that the possibly insane Russian dictator Vladimir Putin  has finally crossed the line. Up until last week, soccer had been remarkably lenient with the conflict-happy, dissent-crushing autocrat.

It's not yet four years since Russia staged the 2018 World Cup. A small handful of us refused to watch, but we were very much in the minority. FIFA President Gianni Infantino — like Putin, an authoritarian with a penchant for holding on to power by any means possible  — enjoyed the tournament so much that in Putin's presence he gushed at the conclusion of the 2018 tournament: "Today I am a happy man. As far as I am concerned, we all fell in love with Russia. And I am sure in four years we will fall in love with Qatar. It is football. It is passion. It is emotions. It is love. It is family. It is unity. And I am sure that this incredibly energetic and positive impact that football had in Russia, it will have in Qatar in four years."

I'm not sure who "we all" referred to here. I doubt it was the huge number of civilians killed in Syria when Putin intervened in that country's civil war in 2015 to prop up the regime of Bashar al-Assad. According to the Syrian Observatory for Human Rights between September 2015 and February 2016 alone, Russian air strikes aimed at neutralizing opposition to the Syrian dictator killed at least 1,700 civilians, including 200 children. Other human rights organizations set the number even higher.

I doubt that "we all" included those living in the Ukrainian peninsula of Crimea opposed to Russia's illegal annexation of their region by Putin just days after he'd hosted that festival of trans-national love and understanding, the 2014 Sochi Winter Olympics. Or those who have died at the hands of pro-Russian, Kremlin-backed separatists in eastern Ukraine — lest we forget, the war between Russia and Ukraine did not start last week, it has been going on for the past eight years with an estimated 10,000 soldiers and civilians killed. It was going on all the way through Infantino's Russian World Cup of love, family and unity.

I doubt too that "we all" includes the thousands of Russian citizens arrested and imprisoned for opposing Putin's government during peaceful demonstrations, or the assassination of dissidents, political opponents and investigative journalists I doubt it includes the members of Russia's LGBTQ+ community, forced into hiding and denial by the government's homophobic legislation. Not to mention war crimes by Russian military forces documented by both Amnesty International and Human Rights Watch during conflicts in Chechnya and the Georgian region of South Ossetia — all of which happened with good notice several years ahead of Infantino's sweet love affair with Mother Russia.

"Russia's soccer players and fans are not responsible for the war in Ukraine," said Bayern Munich's Polish striker Robert Lewandowski at the weekend, wearing a captain's armband in the colors of the Ukrainian flag. "But we can't pretend that nothing's happened." Why not? We've been pretending for the last 10 years at the very least. Now, somehow, Putin has gone too far. Who knew he was such a nasty, volatile character?

Lewandowski's Poland has announced that it will refuse to play Russia in a World Cup playoff game in late March. Other potential opponents for Russia in the subsequent knockout round  — Sweden and the Czech Republic  — have said likewise. FIFA initially reacted by stating that Russia would have to play the games on neutral territory under the name Football Union of Russia. Clearly, Infantino was not just once again out of tune with the majority of the world, but was still besotted with all his loving, unifying, familial Moscow friends. Then today, after tuning in to world opinion, FIFA was forced to do the right thing and suspended all Russian clubs and national teams from all FIFA and UEFA competitions.

In a way, it would have made perfect sense for the 'Football Union of Russia' to have been handed free passage to the 2022 World Cup in Qatar, which is also an authoritarian state that pays mere lip service to human rights, and only when it thinks that someone might be looking. "We will see the best World Cup ever ... in Qatar," Infantino purred last year. "That's why I'm also confident that everyone who will come to Qatar will come to the whole Gulf region — because you can stay a few days here, a few days there — as well. They will witness a welcoming place and a great World Cup." What, even if you're gay or you have an Israeli passport?

The Olympic movement has never lived down the shame of allowing Adolf Hitler's Nazi state to host the 1936 Olympics. There's a long history of evil, unbalanced and genocidal rulers using sports to present a happy, smiling cooperative face to the world at large while they're busy persecuting and murdering fellow humans behind locked doors. For some reason, we always want to believe that everything's fine, and we're willing to turn a blind eye so that we can forget about torture, oppression and murder and just enjoy a jolly good sporting contest.

Unfortunately, soccer's show of solidarity against the Russian invasion of Ukraine has come about a decade too late for those whose cities are being bombed, for the people who are dying and being maimed today and will continue to die and be maimed tomorrow. Sport can not delude itself that it exists in an isolated, apolitical bubble. When we watch our national team take to the field in Qatar, we will also be endorsing the rank exploitation and easily avoidable deaths of thousands of construction workers since Qatar was awarded the World Cup.

Or maybe we just won't think about it. Because Qatar won't yet have crossed the Putin Line. Its misdeeds won't be as clearly visible as the Russian cruise missiles lighting up Kyiv's night skies and killing its people. Or perhaps because in the meantime a psychopathic dictator — helped to stay in power by mediocre, lickspittle functionaries like Infantino or International Olympic Committee President Thomas Bach — activated a nuclear "deterrent," and none of us will be left to watch the tournament at all. No more family. No more unity. No more love.