USMNT and the development of elite players, the last words

Why do players MNT choose not to play in their own national leagues? There are basically two answers to that question: Financial – better pay – and developmental – players believe another league will bring them a better developmental environment.

For example, there were 34 players on the USMNT roster for the last six games of World Cup qualifiers, only 14 (41%) were playing for an MLS team. This is not surprising. Of the top 20 MNT teams in FIFA ranking except for Italy, a good portion of the MNTs’ players were playing abroad. The only reason why Italy has many MNT players playing locally is the fact that the pay level is good as well as the local league (Serie A) is very competitive. 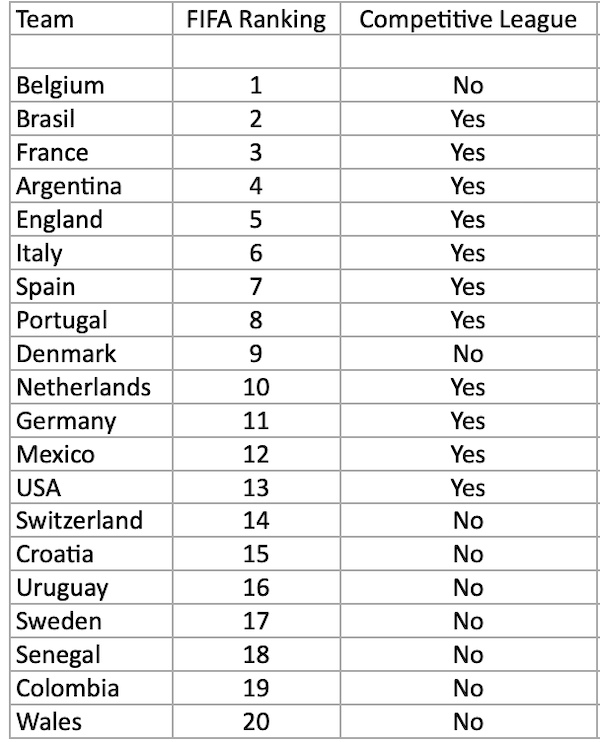 The key item here is whether you can export players to other leagues. This shows both the quality and quantity of your youth developmental process. Every year CIES ( c ) reports global expatriate “footballers.” The report published May 2021 shows that USA exported 142 and imported 531 players in 2020-2021 season. In commercial terms, our soccer system shows a trade deficit. Since our professional soccer is still in its infancy, this deficit is understandable but for the long run it should not be sustainable.

If you look at CIES’s Spotlight on MLS (April 2021), this is their analysis:

“Nearly half of the players that competed in the 2020 MLS regular season were recruited from abroad, whereas 14% were club-trained. Around 60% of the ‘international’ players joined MLS coming from a European club, at an average age of 26.7 years. In comparison, 27% of them were recruited from South America and at significantly younger average age, 23.6 years;

-- On-pitch average age across the league confirms that the MLS has been recently getting ‘younger’. Between 2019 and 2020, this value experienced the most significant decrease in the last six years, going from 27.6 years to 27.2. This is the result of a slight reduction in the average age of foreign players and a much more significant decrease in the case of domestic ones – from 27.1 years to 26.4.”

Among the players recruited for MLS from outside the USA, Argentina, Mexico and England are heading the pack. These are promising developments but still we need to further develop our youth development systems.

Let us have a look at the top 20 MNTs and their “export” capacities. 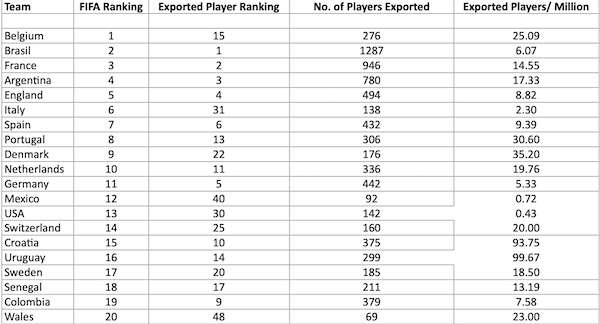 Uruguay and Croatia lead the rankings with 99.67 and 93.75 exported players per one million inhabitants (EPPOMI) respectively. Among the top five leagues, France has the highest EPPOMI (14.55) and Italy has the lowest (2.30).

The most striking low numbers come from the two CONCACAF members in the top 20. USA (EPPOMI: 0.43) and Mexico (0.72). Among the top 20 EPPOMI countries, one is from CONMEBOL (Uruguay) and one from CAF (Senegal) and the rest is from UEFA.

For the time being, let us ignore the realities of Mexico, which I am not too familiar, with and concentrate on the USA. Why does USA have such a low EPPOMI? Maybe the answers can lead us to a more successful USMNT performance on the global stage.

One reason is unique to our soccer landscape. Soccer is not the number one sport in the country. So talented athletes have several other routes to follow. The only remedy for this is time.

Inadequate focus on elite soccer. We must expand our competitive/elite soccer infrastructure. Right now, the focus of the pay-to-play system is not on developing elite players who we can export in the years to come. They are more concentrated on retention of players who pay playing fees and how to make the parents happy. Travel soccer is not necessarily elite soccer. We must focus on elite development as well as grassroots soccer.

Lack of depth in scouting. We must enhance our scouting system so that we leave no stone unturned.

Ignored area: Club Development. We must improve our club development. Clubs are the capillary vessels of our soccer landscape.

All of the above are the responsibilities of U.S. Soccer.

Also, as I said in my earlier articles, we must expand and diversify our professional leagues. Most of the exported players come from the DAs of professional teams. The number of professional men’s teams in our country is around 100. Even if each has a DA, which is not the case, for a country of over 300 million inhabitants 100 is not an adequate number of DAs to develop potential players for export and improve our EPPOMI.

There are reasons to be hopeful for our MNT like our WNT to be one of the best in the world. We need time but also, we need changes to our soccer landscape.