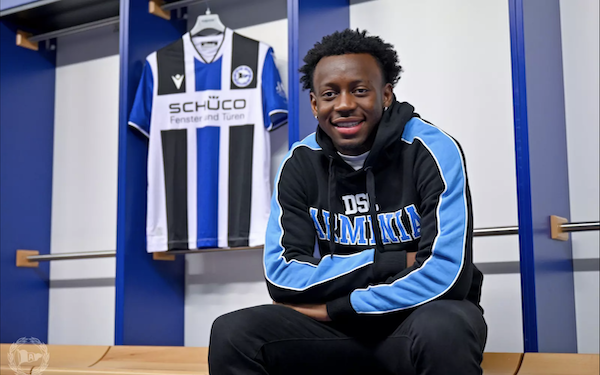 Growing up in the Atlanta United academy or with U.S. youth national teams, George Bello  was always considered one of the top American prospects. His skill on the ball matched the best of his age group and he played the left back position – always a position of need at all levels.

Bello broke into Atlanta’s first team as a teenager, but it became apparent that he was still raw. His defensive positioning was sometimes lacking and he would still get beaten in 1v1 situations.

In 2021, Bello began to take important strides in putting it all together. His performances for Atlanta improved and he took on a bigger role with the U.S. national team. Born in Nigeria, Bello became cap-tied this summer at the Gold Cup and he even started in the final, where the U.S. defeated Mexico 1-0. He was subsequently called up to the World Cup qualifying rosters in the fall.

In January, he secured a move to Arminia Bielefeld, a smaller club battling relegation in the Bundesliga. Bello didn’t know much about Arminia Bielefeld when the offer was presented, but what sold it to him was a long discussion with the club’s head coach, Frank Kramer.

“Everything happened so quickly on that day,” Bello recalled. “What made me want to come to Bielefeld was I had a chat with the coach. He made me feel like he really cared about me. What is really important that I was coming to a team that was going to accept me and I could be myself. The club made me feel it was the right place to grow as a player and as a person. ... It wasn't about me going somewhere where I could go to a top, top team – a big name club. It was going somewhere where I can take my game to another level.” 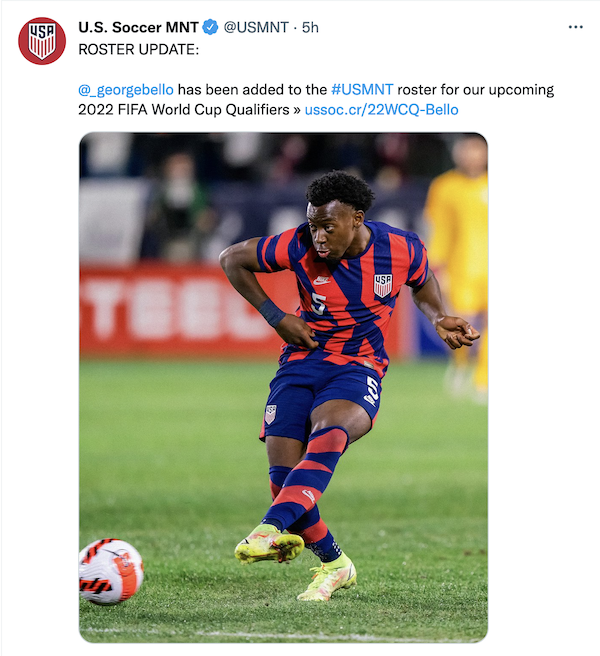 Bello, 20, has enjoyed his time in Germany so far. Off the field, he is happy that the city is small and it reminds him of home. He grew up in quieter Douglasville, Georgia – outside the bustling city of Atlanta.

On the field, Arminia Bielefeld has wasted no time getting Bello into the team’s rotation. Kramer has already used Bello in five Bundesliga games and last weekend gave him his first start – a 1-0 loss to Borussia Dortmund. For Bello, the biggest difference is the higher pace of the game in Germany’s top league.

“Football is universal, so I feel like any league you go to, you still have to be locked in 100 percent,” Bello said. “It's not really like I would say this league is better than this league. But here, it's a really quick league, so you have to think fast, play faster and you don't have that much time on the ball. That's what I would say that the main difference is.”

“There's always seeing people like [Erling] Haaland, who I saw the other day and I was kind of starstruck,” Bello added. “And [Robert] Lewandowski and those top, top guys. I'm just blessed to be here because I mean, I would play with these guys, like on FIFA and stuff.”

Bello knows he has to improve, but he doesn’t have the luxury of taking his time to develop. Arminia Bielefeld is in the midst of a tight relegation battle and has lost three straight coming into this weekend when it will visit Mainz. The club currently sits just two points ahead of VfB Stuttgart for the first automatically safe position.

“I'm really critical of myself, so I don't really like talking about all the good stuff I do and I'd rather just talk about what I need to keep improving on,” Bello said. “I would say it’s the same things I still want to work on when I was in Atlanta – just being in the right position at the right time because I have the pace, but if I'm there before and don't have to waste more energy. ...  I also want to be working on 1v1 defending. ... Also, in the final third, attacking-wise, I want to work on finishing attacks because I feel like I get myself in the right positions. It's just that last pass, last shot, or last cross.”

Another aspect of Bello’s move to Arminia Bielefeld is that it increased the footprint of Americans in not only Europe, but also in Germany. The Bundesliga has been a preferred destination for top young Americans who are making the move out of MLS. In January, three top Americans moved to the Bundesliga in Bello, Ricardo Pepi at Augsburg, and Kevin Paredes to Wolfsburg. They join a long list of players in the league with national team regulars like Gio Reyna and Tyler Adams the most notable examples.

There is also a subset of the American players in Germany. Of the 21 players on the 2019 U.S. U-17 team, seven now ply their trade in Germany. In addition to Bello, Joe Scally, Reyna, and Pepi are now in the Bundesliga while Nico Carrera, Maximilian Dietz and Bryang Kayo are in the lower tiers in Germany.

Unsurprisingly, Bello has a tight bond with the countrymen of his generation. To make his first Bundesliga start against Reyna was a powerful moment in his career.

“We keep in touch quite often. That's really important, especially Gio. Just we basically grew up together,” Bello explained. “I'm playing the game [last week], Gio is on my side. I was really just looking around like - this is crazy. Like, we're just playing in a Bundesliga game right now against each other. We were able to catch up after the game. It's always good seeing your boys like that and seeing them be successful and seeing them being at the top. So there's nothing really more you can ask for.” 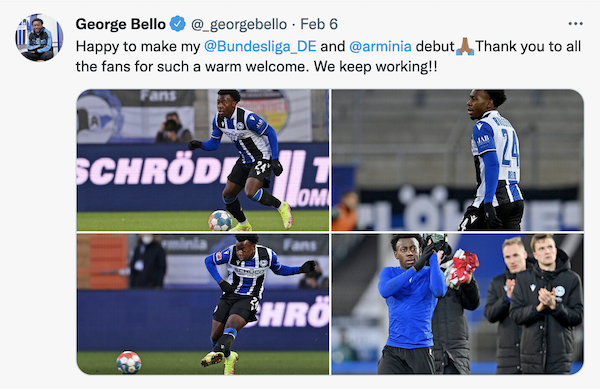 Bello, Reyna, and Pepi will all be in action this weekend in the Bundesliga and then all three will return stateside to join up with the United States national team for its final three games of the Octagonal World Cup qualifying round against Mexico, Panama, and Costa Rica. Bello was added to the roster on Friday when Sergino Dest was forced to withdraw due to a hamstring injury. Bello will presumably come in as the backup left back to the regular starter, Antonee Robinson.

The U.S. team currently sits in second place but the standings are exceptionally tight and the USA will have to play in two places it has never won a qualifier – Mexico City and San Jose. Bello is excited for the opportunity and knows what is at stake for both the team, and himself.

“It's a big year for everyone, especially for the U.S.” Bello said. “My goal is to keep improving myself and just trying to get consistent here. If I do that, everything will work out the way it's going to work out. ... But nothing is given to you. Nothing is handed to you. I have to work hard to get that spot on a World Cup roster, and so is everyone else. This is going to be a fun year. And like I said, everyone's excited for it.”

Regardless of where Bello goes with his club career in Europe or with the national team, he credits Atlanta with being the starting point for his career. It is there where he has played in front of huge crowds, alongside some of the best players in the league, and under a variety of managers – both successful and unsuccessful.

After signing a homegrown deal in 2017, he made his first team debut in 2018 under Tata Martino during a year Atlanta United won MLS Cup. He continued to show progress under the otherwise difficult coaching tenures of Frank de Boer and Gabriel Heinze before truly breaking through under Gonzalo Pineda.

“All those coaches have paved the path for me, and I'm thankful for every one of them because I've learned something that I could take with me for the rest of my career from them. Not too many people get that much insight and learning from different brains of football.”

“I've actually watched every single game so far,” Bello added of Atlanta United in 2022. “I am going to show support to my boys in my hometown. It's a pretty good start for them, so I'm happy for them.“