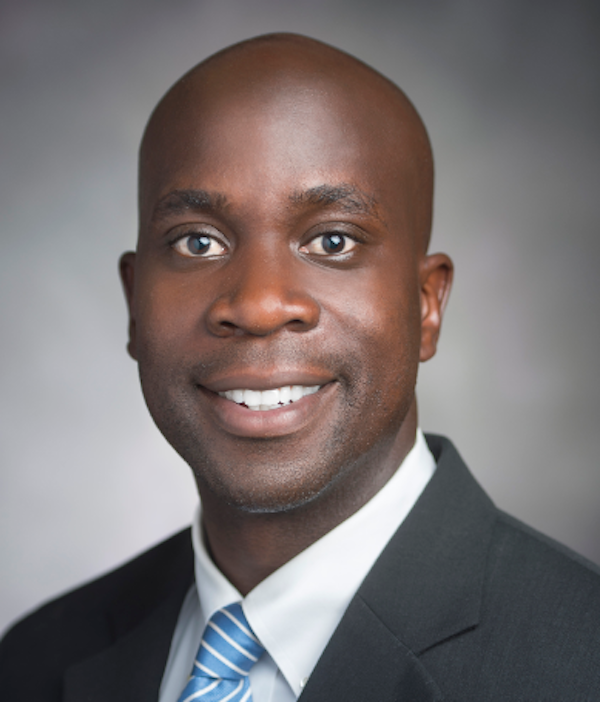 When the United States Soccer Federation was forced to amend its bylaws to increase athletes’ representation from 20 to 33 percent, it opened the door for more men and women who had played the sport at the highest level.

But it takes more than the ability to score or defend to sit on American soccer’s governing body. U.S. Soccer’s board members boast an array of backgrounds and talents.

Take Nelson Akwari. He captained the national U-17, U-20 and U-23 teams, and played professionally in MLS and the USL for 10 years. He also earned a doctorate in materials science and engineering at UCLA – the same school he starred at as an undergraduate. Akwari now works for Boeing as director of the Interiors Responsibility Center South Carolina, leading a team of about 400 that manufactures, assembles and delivers a wide range of interior products to the 787 program and Boeing Global Services aftermarket customers. He serves on various other boards, focusing on STEM-based educational initiatives, health and wellness, and economic community development.

In his spare time, he coaches his child’s youth soccer team.

Akwari’s roots in the game run deep. They were planted in his hometown of Houston. As a teenager, he joined players like Landon Donovan, DaMarcus Beasley, Oguchi Onyewu and Bobby Convey in the first class of youth national team members at the Bradenton, Florida, residency program.

“It was an incredible experience,” he says. “I lived in a dorm with 19 of my closest friends. We went to school together, and had competitive practices every night. We played MLS teams, and traveled all over the world.”

He continued to play for years. But after retiring in 2011, he transitioned into his career as an engineer, and a father. Now 40 years old, as a youth soccer coach he recognizes a “lack of connectivity” between U.S. Soccer’s initiatives, the professional ranks, and state associations and grassroots. 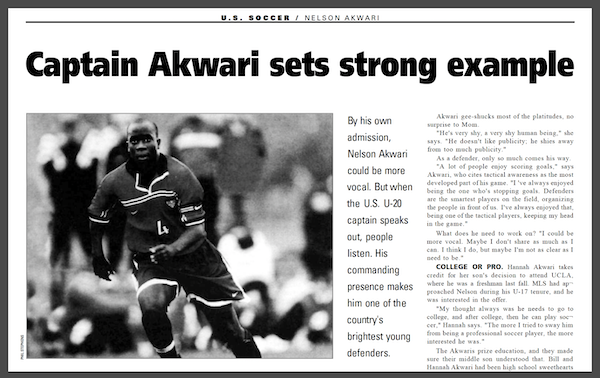 (From the April 2, 2001 issue of Soccer America) Nelson Akwari played for the USA at the 1999 U-17 World Cup and 2001 U-20 World Cup. His post-playing career honors included being named 2022 Pioneer of the Year and 2022 Distinguished Engineer of the Year by the National Society of Black Engineers. He has filed several invention disclosures and holds two patents.

“I have a passion for seeing the game be enjoyed, and thrive,” Akwari says. “COVID showed the importance of kids playing.” When a cold call came, asking if he’d be interested in joining the Athletes’ Council, Akwari – who was already working on development issues for underserved communities in Charleston – realized he could bring important perspectives to the U.S. Soccer board.

All of the organization’s efforts, he says – from the full national and youth teams, to the youngest recreational levels – must be broad-based. Access cannot be limited to those with the financial means to pay for them.

That also means “tangible investments in coaching.” Each state association, Akwari says, should have the funding to ensure that coaches are properly trained. Furthermore, they should seek partnerships with government organizations to provide access to fields for all players.

That’s already happening in places like his native Texas, Akwari notes. But it’s not true everywhere. “We have to hold the federation accountable to the deliverables they’ve established.” 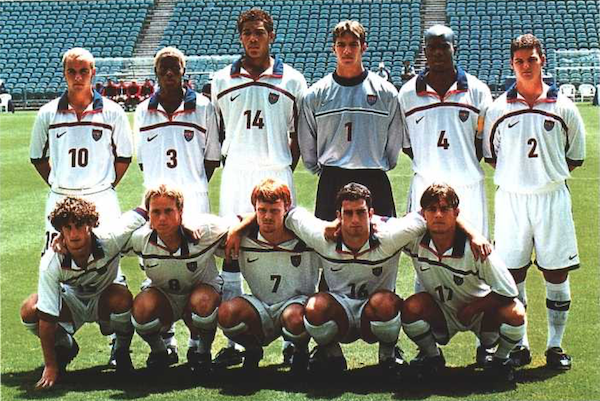 In the four months since joining the Athletes’ Council, Akwari has enjoyed getting to know his fellow members. It’s a very diverse group, he says, and they connect outside formal meetings via a group chat. Their priorities include ensuring the safety of all soccer players – “including mental health” --- and equity at all levels of the game.

He’s learning quickly about governance, and the priorities of dozens of state associations and a variety of age groups. He is excited that the women’s lawsuit over pay has been settled, and that new sponsors are coming on board.

The World Cup in 2026 offers an excellent opportunity to grow the game in the United States, and to help the many state organizations find the resources they need to provide the access for all that he seeks.

“I know there have been frustrations about equal pay, and the Olympics, and the men’s teams struggles,” Akwari says. “But I also see some of the great staff that’s been hired, and the strategic initiatives that have been discussed and implemented.

“We’ll see more as we move forward. I want to be part of the vision and the solution, to make soccer more accessible for all. I’m thankful I had the opportunity to play recreational, club, high school, college and professional soccer. I’m excited to be part of the conversation, and give something back to the game.”