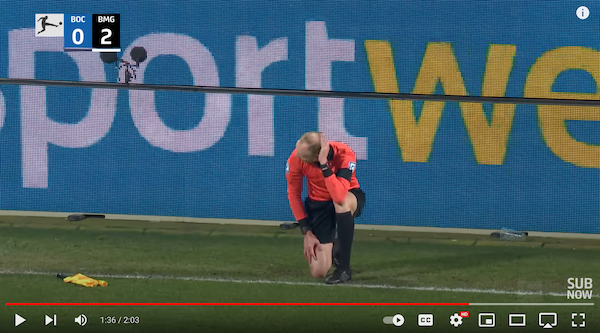 The abandonment of the mid-March Bundesliga game between Bochum and Borussia Mönchengladbach — after assistant referee Christian Gittelmann  was hit on the back of the head by a full cup of beer — attracted much comment, with the fan in the home block rightly condemned for a heedless, violent action that saw the game finish prematurely with 20 minutes to go, and Mönchengladbach 2-0 up. The universal outrage and the subsequent discussion, though, has been missing an important element — the context of the game.

This was a really ugly matchup. I was watching it live on TV with my family and we talked about switching off at the interval. There were numerous nasty fouls, and a great deal of hot debate every time referee Benjamin Cortus blew his whistle. By halftime, he had cautioned three players, but it could easily have been several more. The whole atmosphere of the game was one of several unhinged players sailing close to the edge, and the way that the referee was constantly questioned and pressured will have done little to discourage a crowd which is, to put it mildly, known for being 'emotional' (it's OK for men to be 'emotional,' but only at sports events).

Let's take Bochum's goalkeeper, Manuel Riemann, an experienced journeyman pro, 33 years old. After the beer hit Gittelmann, he was one of the first to run the length of the field and start shouting and gesticulating at his own supporters for what had happened. Very good. Yet during the first half Rieman had on two occasions stood right in front of referee Cortus and yelled into his face about decisions he disagreed with. God forbid that Riemann might think he's part of the problem.

You might argue that Cortus is also part of the problem. He could and should have showed Riemann a yellow card for dissent the first time that the goalkeeper screamed at him. It's just over two years since the German soccer federation issued a set of instructions to its top flight referees regarding dissent, diving, time-wasting and aggressive behavior toward referees. It reiterated that each offense on this list was to be punished with a yellow card.

And what happened? In February 2020, referee Tobias Stieler took heed of the guidelines and showed a yellow card and then yellow-red to Mönchengladbach forward Alassane Pléa during a game against Leipzig. First, Pléa had protested loudly and gestured at Stieler for not calling a foul. Stieler whistled to stop play and cautioned Pléa. The striker looked aggrieved, made a comment to Stieler, and two further dismissive gestures, and then he was off. 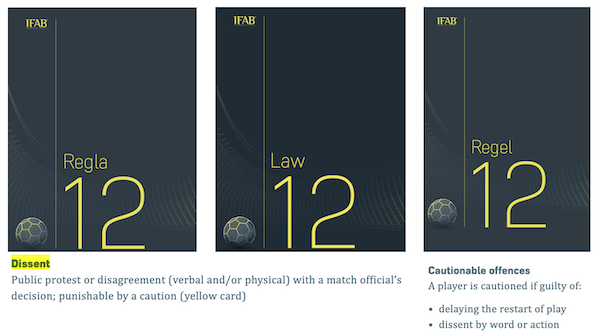 Yet hardly had he implemented the laws than Stieler came in for criticism from those within the game, even though his fellow referees and many in the media backed him. His punishment was way too harsh. He didn't show a referee's instinct that allows for the necessary leeway in interpreting the rules. If referees start yellow-carding every show of dissent, then there will only be six players left on the field! Good. Whatever it takes.

We've heard very little since of the German federation's campaign to clamp down on dissent and gamesmanship. A few weeks after Pléa's dismissal, COVID came along, and the game now had other concerns, such as how was it going to survive at all (remember that discussion?). In the meantime, it's now OK again to yell at the referees, undermine their authority, and then look astonished that a spectator becomes so riled up that they toss a missile in the direction of the AR's head.

The most baffling thing about all this yelling at the match officials is that — in almost every case — replays show that the referee has made the right call (and even if they didn't, it's no excuse to yell at them).

On Thursday night, I was at Eintracht Frankfurt's Europa League round of 16 tie against Real Betis Sevilla. Another very 'emotional' night, and the fans around me let English referee Michael Oliver know what they thought when his decisions went against the home side. To me, though, Oliver reffed impeccably, throughout 120 minutes (don't ever take me to a game — I will sicken and annoy you with my neutrality when it comes to the referee's calls). Most fans either don't know the rules, or they don't care to know them. But when they see the players dramatically throw their arms to the heavens in exasperation after almost every single tackle or foul or throw-in, that's quickly reflected in the stadium's overall anti-ref hostility.

When Gittelmann was hit by the beer, he picked up the cup and threw it backward off the field. Then he placed his flag on the grass and kneeled down, shaking his head briefly in a way that said, "Good grief, has it come to this?" The most dignified reaction of all to the histrionic mini-circus that so many soccer games have become.

I wish him a speedy recovery (he was diagnosed with whiplash and a contusion to the skull), but I also wish to revive the debate about implementing the rule on dissent. Yelling at referees is wrong. Even the "Laws of the Game" say so, and they explicitly provide for punishment — a caution. We must finally accept that the sanction fits the lousy conduct, and that it's certainly not the referees who are 'spoiling the game' when they show raging players and coaches a card for their egregious disrespect.

germany, referees
16 comments about "Abandoned game in the Bundesliga -- it's not just the fan who's at fault".
Read more comments >
Next story loading