Is Mexico an Azteca underdog vs. the USA? 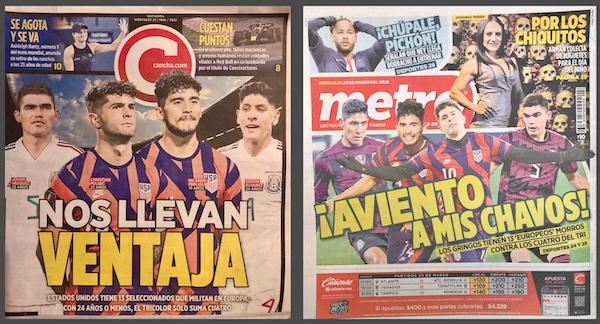 Only once has the USA defeated Mexico on the road in World Cup qualifying. It was in the nations' first ever encounter -- and took place in Rome, in 1934.

That's right, the countries with a 2,000-mile shared border traveled across the Atlantic Ocean for a game to decide which team from the region would compete in the World Cup two days later. The USA won, 4-2.

El Tri, which had traveled by train from Mexico City to Veracruz to board a German ship for Italy, ended up stuck in Europe. Their return tickets not valid for weeks, and short on cash, three players were sold to Spanish clubs for funds to send the rest home. The USA exited the World Cup by losing its opener to the host Italy, 7-1.

After that misadventure, Mexico didn't lose to the USA for 46 years. And El Tri still has never lost a World Cup qualifier to the USA on Mexican soil.

Could it finally happen on Thursday?

As soon as I exited the Mexico City International Airport after a swift pass through customs, I noticed a profound difference from my first visit, 30 years ago. Or even from more recent trips to the world's fifth largest city, now home to 22 million. The sky was clear and the air fresh.

That first trip was for the USA's Olympic qualifying game at the Azulgrana Stadium, when Coach Lothar Osiander's U-23 team beat their Mexican counterparts, 2-1, in 1992. That year the United Nations dubbed Mexico's capital the most polluted city in the world. The smog trapped in the mountains surrounding the hypermetropolis -- which at 7,200-feet altitude already has a 25% lower oxygen level -- made breathing tantamount to smoking two packs of cigarettes a day.

The shutdown of an antiquated refinery and the introduction of unleaded gasoline and catalytic converters improved matters over the years, but Mexico City still rates poorly in worldwide air pollution rankings. This week's clear sky was attributed to the three-day holiday weekend -- thanks to Monday being Benito Juárez Day -- some rain the previous week and crisp breezes. Wednesday's air quality rated "moderate." The forecast for Thursday, when the USA plays Mexico at Azteca Stadium, is "good."

It used to be that the smog, along with altitude and heat, that gave Mexico a huge home advantage.

But that was when of most Mexico's team played club ball in such conditions and the games kicked off at 12 noon. Thursday evening weather by the 8 p.m. kickoff is expected to be in the pleasant 60s (Fahrenheit), and El Tri's starting lineup may have only two Mexico City-based field players.

There's been much pregame talk on both sides of the border about the USA's three-game win streak over El Tri of 2021: home games in the Nations League final (Denver) and Gold Cup final (Las Vegas), and a World Cup qualifier (Cincinnati). 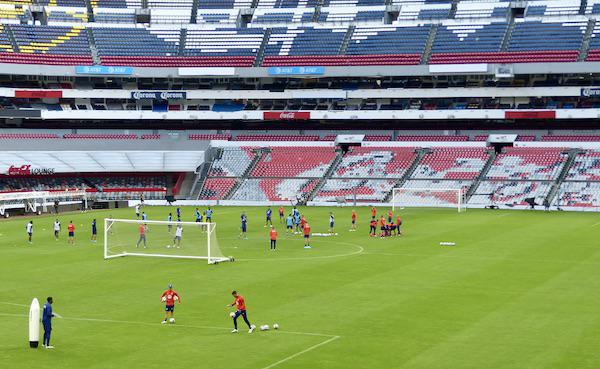 More reason for low confidence in El Tri are its meager results in its latest home qualifiers: a scoreless tie with Costa Rica and a 1-0 win over Panama on a penalty kick. Canada, the Octagonal leader, also tied Mexico at Azteca, setting the tone for how to attack El Tri and showing off its new-found confidence.

"Mexico fans who think the USA will be easy to beat have not analyzed their players," former Mexico captain Claudio Suarez, who retired in 2006 with 177 caps, told Record. "They're at a high level, many play in Europe. They're young, dynamic and strong."

El Tri fans who have been underestimating Coach Gregg Berhalter's squad will have been set straight if they've been following pregame media coverage. The main themes have been Mexico's need to avenge the three straight losses, Tata Martino's thin-ice status and the USA's strengths.

Esto calculated that the U.S. players' worth on the transfer market at $251 million compared to Mexico's $231 million. It also compared players side-by-side, as in Christian Pulisic ($49 million)-Hirving Lozano ($38 million) and Gio Reyna ($46 million)-Raul Jimenez ($24 million).

Reforma's section Cancha announced that the USA "has an advantage over us" on Wednesday's front page after Tuesday's featured midfielder Ariel Antuna promising to avenge last year's three losses "in our house."

Both Cancha and Metro highlighted the fact that the USA has 13 players age 24 or younger with European clubs and Mexico only four.

A favorite topic of the TV pundits is the Argentine Martino's "inevitable" sacking should El Tri fall short of three points on Thursday, that he doesn't attend important Liga MX games, and spends too much time in his homeland. ESPN Deportes commentator and former Argentine star Mario Kempes claims that Martino has already lost the locker room.

That's lot of pessimism about a team tied on points with the USA and in pretty solid position to qualify for the World Cup. But while hypercriticism toward their own nation's team is a long tradition from Mexican media, the heaps of praise bestowed on the USA is a newer development.

We'll soon see if they got it right.

11 comments about "Is Mexico an Azteca underdog vs. the USA?".
Read more comments >
Next story loading