For the third consecutive time at the Estadio Azteca, the USA held Mexico to a tie in a World Cup qualifier. Both teams created chances — Mexico had more, the USA's were of higher quality — but there was something missing in both team’s attacks. The U.S. pressed high up in the beginning and played well for the first 65 minutes, connecting passes and moving the ball with purpose up the field. They failed to penetrate Mexico’s half meaningfully thereafter, especially once Coach Gregg Berhalter changed to a five-in-the-back system in the 80th minute.

The U.S. backline defenders stood tall — no Mexican player was able to get in behind them. The game opened up around the hour mark and both teams were unlucky not to score. Sharing the spoils was a fair result. The Americans will be happy to earn a point and continue their unbeaten run against El Tri. The Mexico squad was booed by a half-capacity crowd at the final whistle, and chants of "Fuera Tata" bounced around the concrete walls of Estadio Azteca. 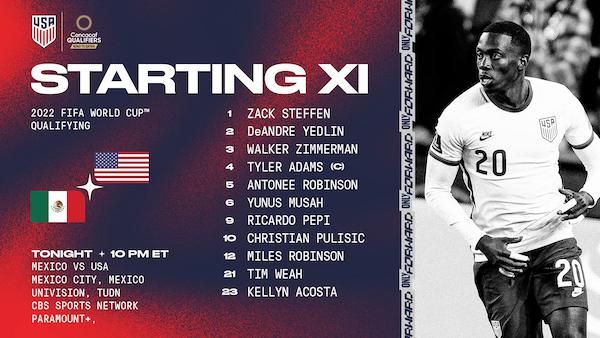 Zack Steffen faced only two shots on target and looked comfortable on crosses and distribution -- besides his overhit pass to Walker Zimmerman in the first half that led to one of the few moments of panic for the USA’s backline.

The U.S. backline held strong all night long against a talented, though sputtering, El Tri attack. Antonee Robinson did well to join the attack and served in several dangerous crosses. Walker Zimmerman won all his individual battles and impressed in the air, though his distribution could have been more consistent. His attempts to find Ricardo Pepi’s feet were futile. Miles Robinson played flawlessly — besides a foolish yellow card foul early in the game — and shadowed Raul Jimenez expertly. The Robinson-Zimmerman duo excelled and forced Mexico to attack down the sides rather than through the middle. DeAndre Yedlin lost the ball in the U.S. half early on and recklessly tackled Edson Alvarez for a yellow card, making him ineligible against Panama. Though solid on the defensive end, the Inter Miami defender was unable to consistently contribute in attack.

Kellyn Acosta did well in his individual battles and was energetic defensively and offensively. His service in the first half could have been better -- he over-hit a free kick cross that should have created a scoring chance -- but he did wonderfully to set up one of USA’s best chances in the second half when his pin-point through ball to Gio Reyna led to a close-range opportunity for Jordan Pefok. Tyler Adams starred defensively and set the tone for U.S. possession early on. His departure from the match and the USA going to a five in the back resulted in Mexico taking over. Yunus Musah covered a ton of ground but faded later on, and his poor back pass led to one of Mexico’s best chances in the second half.

In the attack, the USA looked best for the first hour. Ricardo Pepi and Tim Weah combined excellently in the first half to set up a golden opportunity for Christian Pulisic, who was dangerous when he got the ball in space. But he misplaced a few through balls and was subbed off in the 80th minute to keep his legs fresh for Panama on Sunday. He was visibly frustrated on multiple occasions. Pepi was isolated for most of the match. Weah's yellow card rules him out of the Panama game.

Gio Reyna gave the team a burst of life, going on a tearing run in the second half reminiscent of Diego Maradona’s in the same stadium (although without the finish). He set up Jordan Pefok for the USA’s best chance in the second half. Aaron Long’s first touch was a clearance near the goal line, and Erik Palmer-Brown did well coming into a big game late on.

TRIVIA: U.S. coach Gregg Berhalter became the second American to play (2005) and coach in a World Cup qualifier for in Mexico -- along with Bob Kehoe, who played in the away qualifier in 1965 and coached the USA there in 1972. Berhalter is the first to play and coach a qualifier at Azteca Stadium.