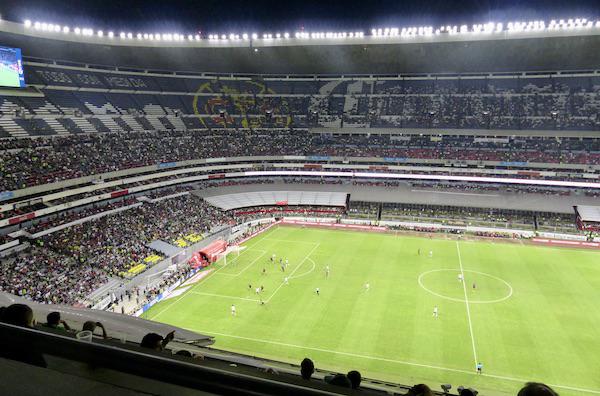 Azteca Stadium, where Pele and his brilliant Brazilian teammates sparkled in 1970 during the first World Cup televised in color, in some sections seemed like a militarized zone, so prolific were police with kevlar vests and hand-held riot shields.

In other areas, this wonderful work of Pedro Ramirez Vasquez architecture looked like an outdoor restaurant as waiters and waitresses darted through the stands to deliver Micheladas, popcorn and potato chips.

The sideline took on a circus quality if you tracked the movements of Mexico coach Tata Martino, who gesticulated at the AR and fourth official throughout the game like an angry clown.

On the field where Diego Maradona scored his greatest and his most infamous goal, the USA-Mexico game delivered a few moments of entertaining soccer during their 0-0 tie. But if you arrived during the halftime break you may have thought you walked into a Raffi concert or a massive children's show.

The P.A. announcer, with the help of big-screen graphics, choreographed the fans through a bizarre dance during which they swung their cell-phone flashlights around in various patterns. The majority of El Tri fans played along until instructions became tedious and they drew the line at his pleas to do the wave -- "Hacer la ola!" -- at halftime and during play.

That P.A. man from kickoff on instructed El Tri fans on how to cheer as if a soccer movie was being filmed in a stadium of extras who had never seen the sport. He actually tried to get chants of "Mexico, Mexico" going by screaming into his microphone. It was so obnoxious and beyond World Cup qualifying decorum that a U.S. Soccer official registered a halftime protest about the cheerleading. That only partially quieted the announcer. 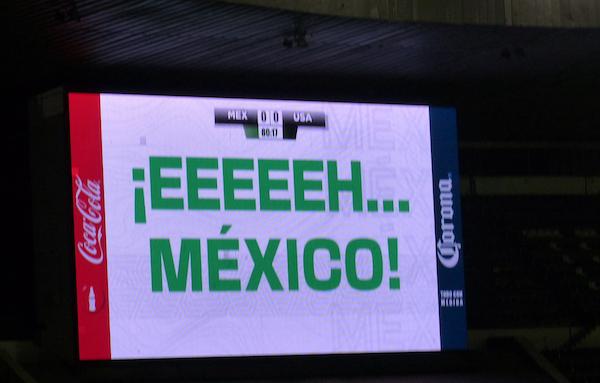 The objective was obvious: He screamed during goal kicks to drown out Mexican fans' anti-gay slur while encouraging them to replace the slur at the end of the "EEEEEH!” buildup with “Mexico.” It was a move of desperation by the Mexican federation (FMF), which also employed scores of monitors -- wearing bright green windbreakers with the word "Control" on the back -- to shush the chanters. As FIFA has threatened to ramp up the penalties — the ultimate being elimination for the World Cup — another FMF move to control the slur-screaming was to limit capacity to half the stadium at around 45,000. 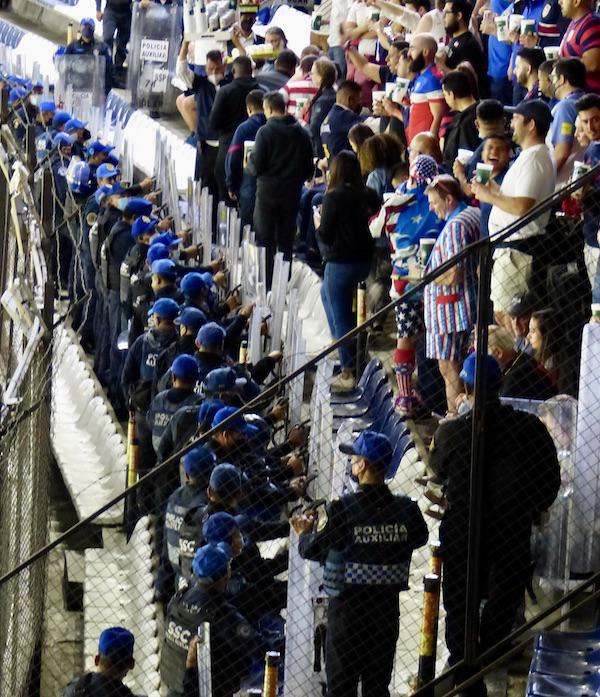 The limited capacity enabled the section of U.S. fans – 1,000 of which got their tickets through U.S. Soccer’s allocation and were cordoned off by a tight phalanx of riot police as if they needed to be contained – to be heard frequently throughout the game.

(To be clear, there was no sign of violence, intimidating acrimony or even beer-throwing as far as my binoculars could see or reported by U.S. fans so far. In addition to the 1,000 in the U.S. section – who were detained in their seats for nearly an hour after the final whistle – a few hundred other U.S. fans bought tickets through third-party vendors and mixed in with the general crowd.)

As far as the soccer went, however depressing it may be that an archrival game between a region’s giants cannot produce a single goal, the U.S. players can take a certain amount of pride in their performance. And their fans should feel optimistic about the team’s future -- assuming it books its 2022 World Cup ticket.

The tie marked the USA’s third straight in Mexico in World Cup qualifying but it came closer to winning than its predecessors did in 2013 and 2017. It had El Tri on its heels for long portions of the game. And most important, it’s how young the team is that impresses and bodes well for the future.

This qualifying campaign may be a roller-coaster, but they usually are even with veteran-laden teams.

Thursday’s U.S. starting lineup had an average age of 24 years, 136 days. The team’s elder statesman, Walker Zimmerman, is 28 years old. Three teenagers saw action. And as the Mexican media pointed out in its pregame coverage, the U.S. roster has 13 players age 24 or young with European clubs compared to El Tri’s four.

Missing during this window from the U.S. roster because of injury are, among others, Barcelona’s 21-year-old Sergino Dest and Juventus’ 23-year-old Weston McKennie.

In their three 2021 losses to the USA, five Mexican players started each of the three games. No U.S. player started all three, and only one played in all three.

The point being, U.S. coach Gregg Berhalter is succeeding and expanding his young pool of players. Notable is how poised the U.S. players have been during the high-pressure games against their archrival. Mexico’s players have consistently lost their composure, whether it’s ref-mobbing — at times even after they got the call! — or late-game fouls like on Thursday that wasted time after they showed signs of surging in their quest for a gamewinner. 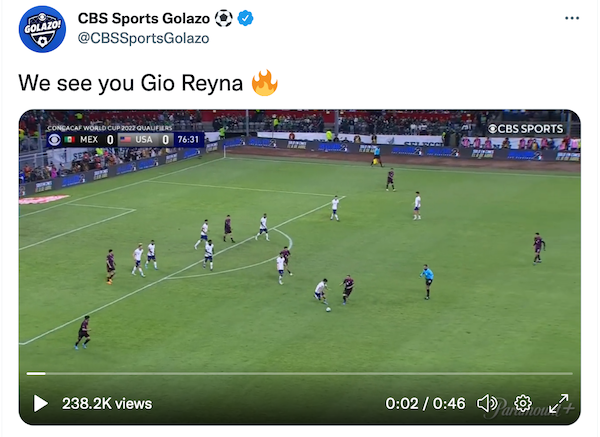 Neither team should be very pleased with their overall performance, but the USA is a young squad on the upswing.

And it was one of the U.S. youngsters who pulled off a feat that one hopes to see when visiting Azteca. The 19-year-old Gio Reyna beat five Mexicans on the dribble in a manner reminiscent of Maradona’s goal against England here in 1986. The main difference was that Reyna started farther in his own half and failed to unleash a shot.

But like much of this young team’s play, it indicated massive potential and a bright future.