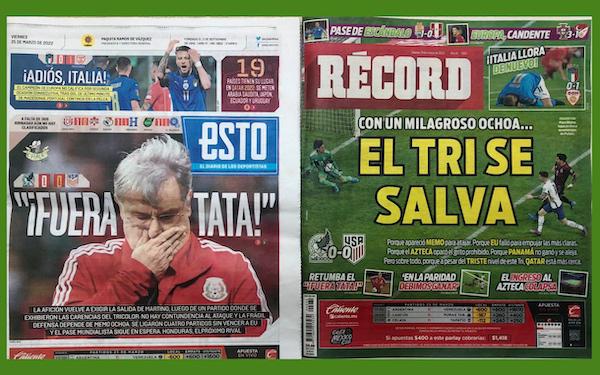 “Les falta,” my Uber driver tells me, gesticulating upwardly with his hands. “Les falta mucho.” There is something big missing from Mexico, he says. “No hay pasión ni corazón para la camiseta” — there isn’t passion or heart for the jersey.

Strong words from a cabbie, but many in the Mexican press and its fanbase agree.

“Basically, this Mexican team has played very poorly for a while,” longtime Diario Milenio sports journalist Rafael Ocampo says. “A creative player does not exist and there is little teamwork ... the whole machinery of the attack has failed.”

One of the more damning statistics for Mexico’s Octagonal run is this: though it has an opportunity to go 12 for 12 points against Jamaica and Honduras, Mexico has captured a mere six of a possible 18 points against Canada, Costa Rica and the USA. They struggle against disciplined and experienced teams.

Indeed, Mexico’s chances on Thursday night came from a few individual efforts from outside the box via Chucky Lozano and Jesus Corona. Raul Jimenez lost his battles in the air and not once successfully got in behind — his closest attempt to beat Walker Zimmerman ended in a hapless dive.

But El Tri’s problems on the field run deeper than that: Tata Martino’s cast of aging stars — captain Andres Guardado, out due to injury, will be 36 this year — don’t inspire Mexico’s hungry fan base that is accustomed to energetic and fast-flowing futbol. Its defense relies too heavily on Guillermo Ochoa (37 in July), whose save against Christian Pulisic was generously called the miracle that saved El Tri by the Mexican press. 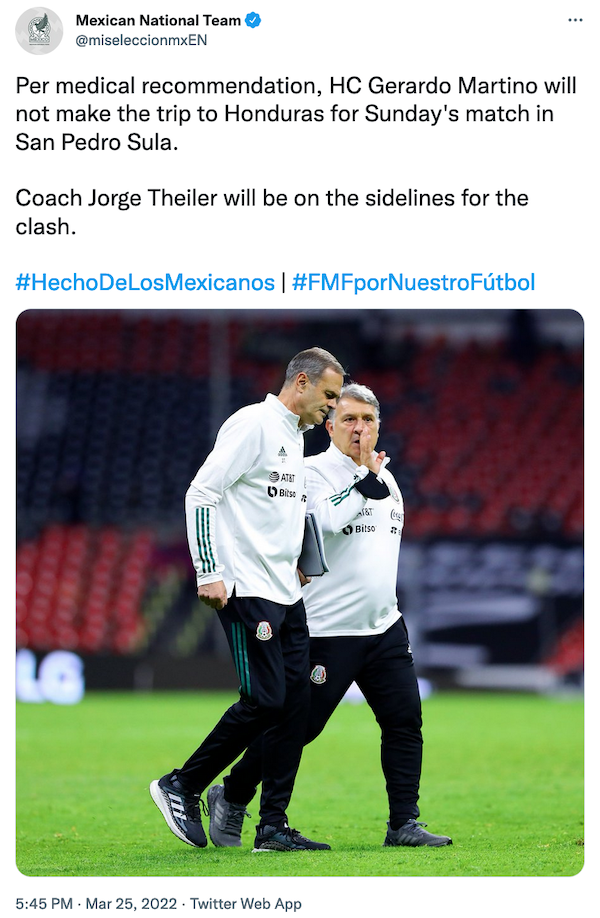 Like the smog hanging over the Mexican capital, the unique challenges of playing at the Estadio Azteca has dissipated out of the basin of Mexico. U.S. players of old speak of the environment of Azteca like it’s a high-altitude fortress, where foul air and passionate fans make it difficult to breathe and hear each other. Games used to be played on Sundays at high noon, when a roasting sun hung over a vertical crowd 80,000-plus deep.

Thursday night's game kicked off at 8 p.m., the Mexican federation (FMF) limited capacity to 47,000 to make it easier to stifle the anti-gay chant, most of Mexico's players are no more accustomed to playing at altitude than the Americans, and the tickets were prohibitively expensive for many El Tri regulars. The PA announcer attempted to drown out the chant and to corral the crowd into “the wave” and a bizarre flashlight halftime show.

The crowd hardly intimidated the Americans, who for the first hour played most of the match in Mexico’s half. When they invited Mexico to attack in the last 10 minutes by switching to a five in the back, Mexico came up empty and the USA left the Azteca with a point for the third consecutive World Cup qualifier.

After the match, the Argentine authoritatively spoke of Mexico’s internal process but admitted the team must recover a calmness in the final third.

"It was an intense game with both teams trying to win," Martino said. "The USA stopped attacking in the last 15 or 20 minutes. The rest of the game had seen both teams with possession and scoring opportunities. It was an equally played game, but we should have won. We have to continue to play with composure, which we lost in the final 25 meters when deciding whether to shoot, pass or dribble. This is an issue we need to address and I believe we will return to playing as a confident team."

The feeling of frustration continues to hamper Mexico, a team that has made it out of its World Cup group in every edition after being banned from the 1990 World Cup (for fielding overage players at a U-20 tournament). Mexico has one of the richest and oldest soccer cultures in the world, but El Quinto Partido (the fifth game — a quarterfinal appearance) has proved to be Mexico’s glass ceiling for almost three decades. Those performances have resulted in one of the harshest media and fan environments in international soccer. And after Thursday, those feelings were exacerbated while the fortress of Azteca acted more as a Disney Land playground.

Mexico is likely to qualify for Qatar — El Tri faces Honduras and El Salvador, two Octagonal teams with nothing to play for in their last two games — but the match on Thursday was more about pride than points. It was unsuccessful on both counts, however, leaving Martino in the hot seat, likely through Qatar 2022.  “He has prestige,” Ocampo says of Martino. “But there is a lot of work to be done. Many believe that there should be a new coach for Qatar.”

That opinion rang out after the match as loud as the PA’s embarrassing cover-up chanting. Fans jeered “Fuera Tata” around the concrete concourses and boos rained down on the exiting El Tri entourage.

Is there hope for the team that once ruled Concacaf? “To make the World Cup? Of course,” Ocampo says. “But we always get there. Further than the first round -- there are not many illusions.”