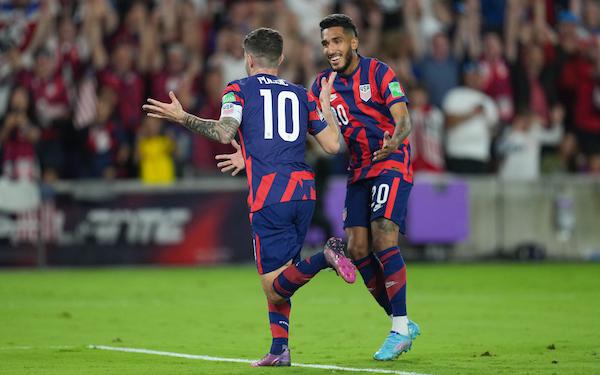 It has been a long road back for the USA after the debacle of 2017, but it will have to be patient for three more days before it's certain that it will be headed to Qatar in November.

“We know we’re not there yet," said U.S. coach Gregg Berhalter after Sunday's 5-1 win over Panama in Orlando, "despite what that banner said."

The USA's fingertips can just about touch the edge of the Doha Corniche, but it has not yet qualified for the World Cup -- despite the banner "Qualified" the players briefly unfurled in their postgame salute to the Orlando fans.

The USA will have to lose by six or more goals to Costa Rica in San Jose on Wednesday to not to qualify as one of Concacaf's top three teams. Impossible? The USA has lost its last nine World Cup qualifiers in Costa Rica, mostly recently a 4-0 decision in 2016 that cost Jurgen Klinsmann his job. But the USA would have to pull off the greatest choke job in the history of soccer to not claim a top three spot on Wednesday.

The game will be played under different circumstances and with a different team.

The USA will head to San Jose after having played his best back-to-back games of the Octagonal. It could have scored 10 goals on Sunday night and it would not be in the position to qualify directly on Wednesday like it can now if it had not picked up one point in Mexico City.

Conventional wisdom was that the Berhalter should rest his stars against Mexico and save them for the Panama match, the game the USA had to win if it hoped to qualify for the World Cup. But Berhalter signaled his intentions in announcing his squad: "For us, it's not trying to get cute. It's trying to put teams on the field in each game we think can win the game."

Berhalter challenged his players to win in Azteca, which the USA has never done in qualifying. It didn't beat Mexico, but it certainly deserved a point with its best performance ever at Azteca, at least for the first 75 minutes or so.

There were only four changes from the team that started at altitude in Mexico City, but each of the new players had big roles in putting the game away in the first half, giving a lift to the other players struggling with heavy legs.

Paul Arriola and Jesus Ferreira scored the second and third goals, Luca de la Torre created fits for the Canaleros, buzzing around the edge of their penalty area, and last-minute replacement Shaq Moore, who had a game at beginning of the week in the Spanish second division and wasn't in the picture until Reggie Cannon's Covid-19 positive test, created havoc up and down the right side.

Ferreira was the fifth center forward to get a start in qualifying and the first to score since Ricardo Pepi had two goals against Jamaica in the fourth game against Jamaica, while Moore was -- at least before Sunday night -- No. 4 on the USA's depth chart at right back. De la Torre didn't get his first start of qualifying until the third game of the winter window in freezing St. Paul. And Arriola? He got his first start after seven straight games on the bench.

"We have a game plan," said Berhalter, "and we try to use the players that can most effectively execute the game plan."

Ferreira and Arriola provided that on Sunday night. Ferreira scored one goal and should have put away a second in the second half while Arriola added a goal and an assist.

"In both of their cases," said Berhalter, "it's arriving to get into the penalty box if you want to score. Jesus is a good combination player, a very clever player. He understands where space is really well. And Paul, the same thing. We've challenged him about arriving in the box, getting in good positions and he did that, getting great service on his goal."

Of the 16 players who stepped on the field in Orlando against Panama, half weren't even with the USA in the first window. And that doesn't include Zack Steffen, who couldn't play because of back problems and then Covid-19, or Walker Zimmerman, who was with the team but the only field player who didn't play in the opening window.

"We have complete faith in anyone who's called in," said Berhalter. "We don't call players in unless we trust them and we think they can perform at a good level."

If there has been one constant throughout qualifying, it's that the USA's depth has been the difference, particularly in the third games of the three three-game windows to date, where it has taken nine of nine points.

That depth should be the insurance card to get the USA over the finish line in the third game of the final window.

men's national team
18 comments about "USA has the finish line in sight after a long road back".
Read more comments >
Next story loading