The USA's World Cup qualifying losing streak at Costa Rica increased to 10 straight on Wednesday. But Coach Gregg Berhalter's team, needing a win, a tie, or a loss by less than six goals to seal its 2022 World Cup spot, accomplished the mission by losing 2-0. 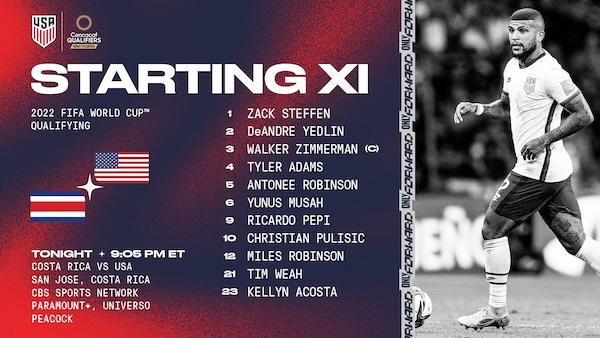 Zack Steffen  swatted the air as Juan Vargas' 8-yard header flew into the net. Dropping the high free kick cross from Brandon Aguilera kept the play alive ahead of the second Tico goal.

Right back DeAndre Yedlin faded after early surges that included winning a corner kick and a cross that required keeper Keylor Navas's punch. Left back Antonee Robinson partnered with Steffen on the blundering that facilitated Costa Rica's second goal and played sloppily at the other end during left-wing attacks. Miles Robinson, with ample time to tee-up, slammed his 8th minute half-volley straight to Navas on the USA's best scoring chance. Walker Zimmerman mis-timed his leap on Costa Rica's corner kick goal. On a chance to a finish a rebound, Zimmerman sent his half-volley way high in the 48th minute.

Kellyn Acosta took free kicks as if the object was to bruise someone in the wall. His defensive lowlights came by ceasing to mark Juan Vargas as he scored the opening goal off a corner kick and giving the ball away with a pass out of bounds shortly ahead of the second goal. The free kick that led to the second goal was gifted to Costa Rica by Yunus Musah with a clumsy foul on Aguilera, who was facing his own half with nowhere to go when Musah took him down. Tyler Adams came off after an uneventful 45 minutes.

Christian Pulisic, fouled seven times by the Costa Ricans, needed a stronger supporting cast. Nice also would have been if Ricardo Pepi had set Pulisic up for a sitter instead trying a narrow angle shot on Navas in the 12th minute. Pepi's second-half shot from the edge of the penalty area required a slightly greater effort from Navas. Pepi delivered a nice pass to Tim Weah for a shot that was blocked in a rare U.S. highlight sequence started by Pulisic's free kick for a Miles Robinson header that Navas parried.

Coming off the bench, Luca de la Torre  failed to spark offense as he did as a starter against Panama. Gio Reyna's clever 71st-minute pass to Pulisic led to a Musah shot blocked by a defender, but his only shot flew high.