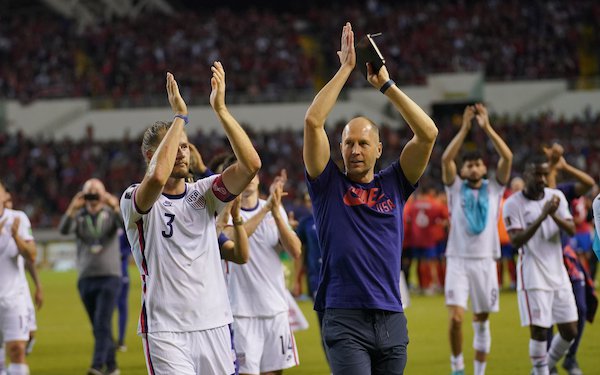 The USA has qualified for the 2022 World Cup.

After the debacle in 2017, it will be happy to have qualified any way it can.

But the USA qualified as the third-place team in Concacaf thanks to goal difference -- easily its lowest finish to qualify for the World Cup since the tournament was expanded to 32 teams in 1998 and Concacaf was awarded at least three berths.

Wednesday's 2-0 loss at Costa Rica was certainly not the way the U.S. players and staff wanted to end the 14-game qualifying campaign.

Or how they might have imagined qualifying before the Octagonal started, coming off Concacaf Nations League and Gold Cup championships, or even at the halfway point of qualifying when the USA had an eight-point lead over the Ticos.

That the USA played to win -- fielding its first-choice lineup -- and lost to the Ticos, who saved their yellow card-carrying stars for their playoff against New Zealand in June, might be the best thing that could have happened because it revealed the limitations that still exist in what is the youngest U.S. team to qualify for the World Cup and what will be the youngest team at the World Cup.

The USA opened the final window with a 0-0 tie at Mexico and 5-1 win over Panama -- the two results mattered -- to put in its best back-to-back performances of the Octagonal, but it has to yet come close to showing its a three-game team. (The March window was particularly tough for injuries -- the USA could have used Matt Turner, Sergino Dest, Weston McKennie, Chris Richards and Brenden Aaronson -- but they will always be an issue.)

U.S. coach Gregg Berhalter started seven players in all three games and made four changes for the second match against Panama, but the USA hit a wall in the second half on Wednesday night in San Jose and lost after conceding two goals on set-pieces, an area of the game that it had prided itself on being a strength throughout qualifying.

Berhalter's "next man up" motto got the USA through the Octagonal marathon -- 14 games over seven months -- but three games in seven days? There will a little more rest between games at the 2022 World Cup, but not much. In Qatar, teams will have to play three group games over nine days.

Berhalter will have the pick of the deepest pool of young talent the USA has ever produced, but the national team might not yet have the depth to get through three games and advance far in the tournament -- or in the bigger picture, achieve the worthy goal he has set for his players of putting U.S. men's soccer on the map for the world to see.

The USA will have eight months to prepare for Qatar, but it will be unlike any recent World Cup in which it has participated.

In 2014, Jurgen Klinsmann had more than a month to prepare his team before it opened against Ghana. In November, Berhalter will have his team together 7-10 days before the first game, depending on where the USA is drawn on Friday. Most of his key players will be coming off a crazy fall schedule in Europe, where the Champions League group stage will be crammed into two months in order to be finished before the World Cup starts.

Those eight months will include a June window with four national team games -- but at least two will be Concacaf Nations League qualifiers -- and a late September window with two games. They will also cover what has never been in place before -- a summer transfer window, and all that entails in putting players and their club situations in flux, between the end of World Cup qualifying and the finals themselves.

Wednesday's result left the USA with only four points in the March window -- its fewest points in any three-game window -- and extended its scoring drought on the road to 349 minutes. Yes, it took a great game from Keylor Navas to shut out the USA, but it failed to score on a host of chances, far more than it should realistically expect to get in any game in Qatar.

Once again, Ricardo Pepi failed to score, leaving the USA with just four goals from its center forwards in 14 qualifiers -- three from Pepi in his first two starts, none in his next six starts, one from Jesus Ferreira against Panama in his second start, but none from Josh Sargent, Jordan Pefok or Gyasi Zardes in the other four starts at center forward.

Berhalter was right in his post-game comments on Wednesday night to say how much his team had progressed in the last year, particularly as far as being able to press opponents in a coordinated manner. But the USA was still never consistently put under pressure for long stretches like it will surely be at the World Cup, where opposing attacks will be a lot more powerful than what the USA has faced over the last seven months. 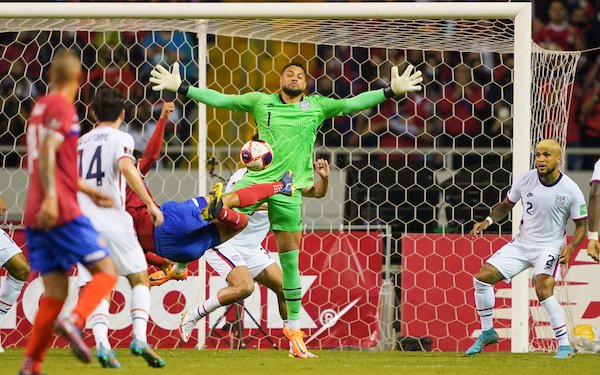 Zack Steffen, whom Berhalter had at the Columbus Crew, entered qualifying as the projected No. 1 keeper. With Turner injured, Steffen returned in the March window with a chance to nail down the starting job.

Steffen was very shaky in the first half against Panama and very lucky he didn't pay a price. Three days later, he wasn't so fortunate, conceding the ugliest goal the USA conceded in the Octagonal on Anthony Contreras' goal to give Costa Rica its 2-0 lead.

Who's the USA's No. 1 goalkeeper and who's its No. 1 center forward are both very much up in the air, not a good position to be in to start its World Cup countdown.