USA foes to look forward to: England and Iran 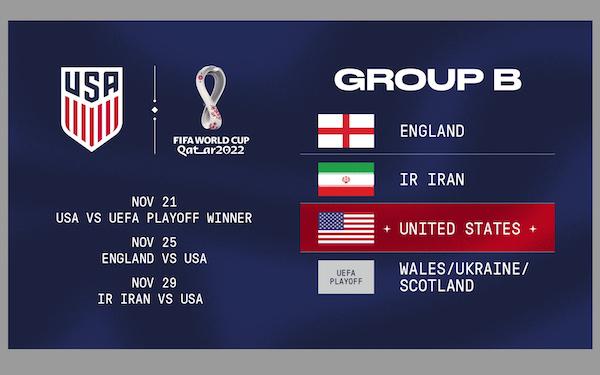 The USA will open Group B play Nov. 21, the first day of 2022 World Cup play, against the European playoff winner Wales, Scotland or Ukraine. It faces England Nov. 25, the day after Thanksgiving, and Iran on Nov. 29.

The good news: There may not be another group of players the USA is as familiar with as those who comprise the England squad, thanks to the popularity of the English Premier League and the number of U.S. players who earn their keep in England. Coach Gregg Berhalter also had a stint in England, with Crystal Palace, during his long career abroad.

The bad news: England still hasn't lifted a major title since it hosted the World Cup in 1966 but it came close last year with a runner-up finish to Italy in the European Championship, finished fourth at the 2018 World Cup, and it has been producing more young players with exceptional individual skill than in previous decades.

“It was amazing to get England in our group. I think that’s a game that always has a lot of attention around it because of England and their fans, and their established place in soccer."

“I know Gregg Berhalter quite well. We've met a few times and had long chats about things – in fact only a few weeks ago. ... They've got some really good players. We know what they could be capable of as a nation, so that one in particular is an intriguing one.”

The good news. Iran hasn't reached the second round in its previous three World Cup appearances and has little experience against non-Asian national teams.

The bad news. Team Melli has players in leagues throughout Europe, including the Bundesliga, the Dutch Eredivisie and the Portuguese Primeira Liga. Its 2018 World Cup performance wasn't that bad: a 1-0 win over Morocco, a 1-0 loss to Spain and a 1-1 tie with Portugal. Not be forgotten is the 1998 World Cup, where the USA with an experienced lineup fell 2-1 to Iran in a Lyon stadium filled with cheering expat Iranians.

Captain: The 32-year-old midfielder Ehsan Hajsafi, who plays for AEK Athens, is the team's most capped player with 118 appearances.

“Iran, in general, I think is going to be a great challenge for us. I’m a little bit nervous that the public or the media may take Iran lightly. But it’s not a team to take lightly. It’s going to be a good opponent.”

“I hope that soccer makes a good contact and good relationship between people and that is what people expect of sport. I don’t care about this politics. Of course, this is some story but we are only focused on playing. We have shown we are not interested in this with our matches against Iraq, we are only interested in playing soccer.”