Uzbekistan, which fell 9-1 to the USA on Saturday after conceding its first goal 26 minutes in, made it even easier for the Americans on Tuesday by gifting an own goal 24 seconds after kickoff. Catarina Macario scored her first of two goals in the 12th minute with a free kick that ranked among the best U.S. strikes in this 9-0 win to be admired regardless of the opponent. 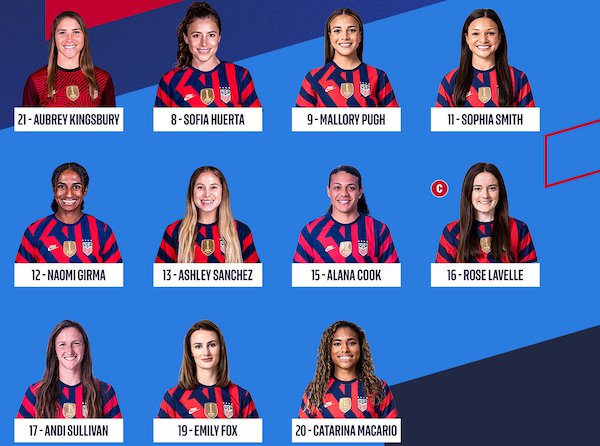 GOALKEEPER
Aubrey Kingsbury celebrated her debut but wasn't given an opportunity to demonstrate her abilities in goal against a team that failed to get a shot.

DEFENDERS
Outside backs Sofia Huerta and Emily Fox contributed to the USA's waves of wing attacks and Fox was fouled for the free kick that gave the USA a 2-0 lead. Debutant Naomi Girma was flawless whenever on the ball but was untested defensively and stayed deep while her backline companions moved forward. Her central defense partner, Alana Cook, did get involved in the attack but headed wide when Ashley Sanchez delivered a good cross.

MIDFIELDERS
Rose Lavelle's dynamic play started early when she flew down the wing and delivered the pass that Kamila Zaripova pinged into her own goal. Lavelle got full credit for the USA's fourth goal when she cleverly finished with a delicate chip off the rebound of her first attempt, which went straight to the keeper. Lavelle's second goal -- from 16 yards after dribbling through midfield -- made it 5-0 and ranked among the best of the evening.  Lavelle also set the plate for Mallory Pugh's goal. Ashley Sanchez's nifty midfield move helped create the seventh goal and she scored with an arching shot to make it 9-0 with what may or may not have been a mis-kick. Andi Sullivan, who played a more supporting as the wide midfielders attacked constantly, cleanly stole the ball during a rare Uzbekistan counterattack.

FORWARDS
Catarina Macario's low free kick from 20 yards that made it 2-0 went in off the inside post. Her second goal, the USA's sixth goal, demonstrated her ability to shrug off close-marking and shoot on the turn. Macario assisted on the goal by Mallory Pugh, who took a smart touch to prep her finish on the USA's third goal. Pugh assisted on Lavelle's second goal and Macario set up a couple of prime chances that her teammates squandered. Sophia Smith, coming off a hat trick, stayed off the scoresheet by shooting weakly on one chance and wide on another.

SUBSTITUTES
Trinity Rodman whiffed on her first chance from close range and headed straight to the keeper with plenty of net to aim for on her second opportunity to net her first U.S. goal. Once her nerves settled, she made it 7-0 in with low 14-yard shot into the corner. In the 80th minute, Rodman managed to hit the crossbar from three yards after fine service from Midge Purce, but Rodman's header after Kristie Mewis' free kick helped set up Purce's goal from close range that made it 8-0. Mewis mis-timed a header in front of the goal. With cumbersome touches and a poor strike, Kelly O'Hara wasted a prime chance in the 77th minute.