Here they come, just what we’ve all been waiting for ... the astounding, amazing, unprecedented, truly wondrous details of the new astounding, amazing etc Al Rihla, the new WORLD CUP BALL. The brand new version that adidas has come up with for the 2022 Qatar World Cup.


Well, for a start, that’s highly dismissive of me to say “come up with.” Adidas doesn’t just come up with a new World Cup ball. They conceive, it, they invent it, they design it. And, you can be sure, they fashion it.

This is quite an operation. Because high-level science is involved. I know that because adidas says so. And there is one thing that bringing science into the matter is supposed to ensure: that no one will have the impertinence to question any of the decision-making.

I consider myself a veteran, and therefore something of an expert among those idiots who try to make sense of soccer-ball science. I started to pay serious attention to this area of knowledge back in 2000, when adidas introduced the Terrestra Silverstream to be used in that year’s European Championship.

The science was there — giving us a ball with a liquid gel cushion just under the surface, which (said adidas) allowed the ball to snap back into shape (meaning sphere-shape, presumably) more quickly than any previous ball. Meaning that this ball would behave in “a truer fashion” (said adidas).

While adidas was spreading that good news, England’s goalkeeper David Seaman had let in a goal after making a terrible mess of trying to save a free kick from Portugal’s Luis Figo. “Not his fault,” said coach Kevin Keegan. The ball was to blame, it had moved “all over the place.”

Not what adidas wanted to hear, but things got a lot better for them when an assistant coach for England, Les Reed, sounded off. This ball, asserted Reed, moved quicker through the air and traveled further than other balls: “We’ve seen center-halves send headers huge distances. People are confident of sending passes half the length of the pitch.”

For England, a team devoted to the long ball and to center-halves who dominated in the air, that sounded almost too good to be true. England to win!

England did not win the championship. In fact, losses to Portugal and Romania meant they didn’t even get out of the first round.

Here was proof of what I already suspected. That the claims made by manufacturers for their new, unique balls were largely false. Based on sales talk rather than scientific proof.

Next up, it was Nike, with a new ball for the English Premier League in the 2000-01 season. The Geo Merlin. How could this fail? After all, it came with 32 panels of polyurethane synthetic leather, five layers of casting material and a six-winged carbon-latex bladder. “A good ball for the technical player,” judged Arsene Wenger.

The makers were getting more savvy. Aware that goalkeepers will always complain that a new ball gives them problems, the Nike people were not afraid the dub the Geo Merlin the “goalie killer.” Said the ball’s designer: “I think we’ll see shots from greater distance, more excitement.”

At last, a non-scientific, perfectly understandable statement of what a new ball was supposed to do: create more excitement, with the hint of more scoring.

Surely, nobody would disagree with those aims. Except the routinely unhappy goalkeepers, of course.

The World Cup moved to Japan/South Korea in 2002. With it came the new adidas ball, the Fevernova. The scientific advances kept on advancing. Get a load of this: The Fevernova featured gas-filled micro-balloons under a foam layer, designed to produce a more precise flight.

Jean-Louis Legrand, the adidas Head of Soccer, produced vastly impressive scientific evidence: “We tested the ball with a machine that shot it 1,000 times. Its flight path never varied.”

Wow! Then again, maybe not so wow! after all. Given that the best teams were not likely to employ too much aerial play, preferring to have the ball on the ground, this continued emphasis on the aerial behavior of the ball didn’t make much sense. Neither in practical, nor in scientific terms.

For Euro 2004, adidas announced the Roteiro — “The first-ever ball produced with the innovative thermal-bonding technique.” Not to mention the new Power Balance Technology, which offered a “revolutionary new carcass.” David Beckham said he loved it: “No one has ever seen anything like this before.” Then adding ... Impishly? Spitefully? “Goalkeepers are going to have a very tough time.” But Real Madrid’s Ivan Helguera thought it was awful: “It’s like a beach ball. It’s hard to believe they can call this a ball.”

I spoke to one of the adidas scientists, who told me “it’s about creating more chances. You’ll see more goals, players will want to practice their skills more.”

At last, I find a clear statement that a new ball will bring about more scoring. I’ll be back to that shortly.

If you can stand it, I have more wildly exciting scientific news for you. For the 2006 World Cup, in Germany, the new ball was the Teamgeist. Which, ho hum, featured refinements of the thermal-bonding process, and introduced “a radically new 14-panel configuration,” which was guaranteed to allow players “significant improvements in accuracy and control.” No definition of significant.

Would anyone dare to criticize the Teamgeist, knowing that it had taken adidas “three years of extensive research and development” to produce it? It was “the best-performing ball ever” said adidas.

The intriguing high-tech “robotic leg” had greatly helped the research, able to “repeat an identical kick at the exact same angle and exactly the same speed and power, time and time again.” And reliable robo-leg had shown, proved really, that Teamgeist was 30% more accurate than other balls.

Improving the game? More goals? The Teamgeist was first used in a genuine competitive game of the French Ligue 1. The game finished 0-0.

But the real destruction of all these elaborate claims for the superiority of this or that ball, for the miracles of their technology, came at the 2006 World Cup itself. When the final stats were released, they showed that the tournament had averaged 2.29 goals per game. Not quite the lowest ever — the 1990 World Cup hit the bottom at 2.21 per game — but all that science, all that development, all that touting of the best ball ever, had seen only a constant reduction in goalscoring.

That is worth keeping in mind when you read what adidas has to say about the ball for Qatar 2022, the Al Rihla. I’m going to repeat below, a lot of this hogwash. Much of it will sound familiar because you’ve seen it before, above, in descriptions of previous miracle World Cup balls.

But that’s where we are with commercialized sport. The sales talk simply swamps the genuine soccer stuff. 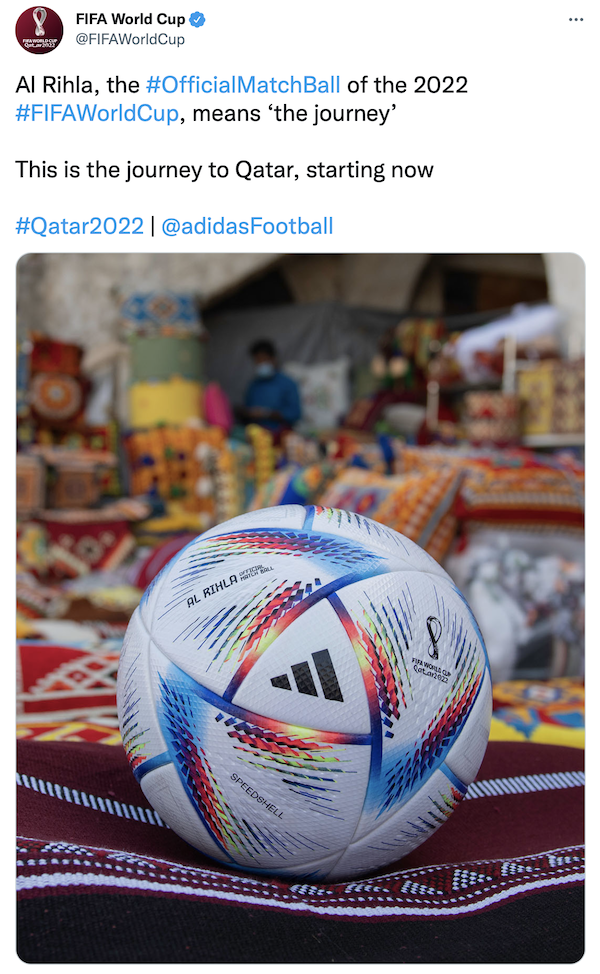 Just to get things going, it’s worth asking why there is still so much concentration on the flight of the ball. So be prepared for the devastating news that Al Rihla travels faster in the air “than any ball in the tournament’s history.”

Does that matter? Will that make for better soccer? The sales talk shouts (but never actually says) that it will. The history I’ve outlined above says that it won’t.

• Al Rihla is the first FIFA World Cup ball to be made using only sustainable water-based inks and glues.

• Al Rihla’s distinct, bold colors represent the vibrancy of the host country, and the ever-increasing heights of the competition.

• Al Rihla’s new design allows the ball to maintain a significantly higher speed as it journeys through the air.

• Adidas has equipped Al Rihla with a special CRT-core, which will provide speed, accuracy, and consistency with maximum shape and air retention during play.

• The ball’s textured polyurethane skin, known as Speedshell, takes on a brand-new 20-piece panel shape, to improve flight stability and swerve due to the macro- and microtextures on its surface.

• Finally: “This is a stunning, sustainable, and high-quality Official Match Ball from Adidas that will be enjoyed by stars performing at the top of their game on the world’s biggest stage in Qatar, as well as grassroots players everywhere,” remarked Jean-François Pathy, FIFA’s Director of Marketing.

Totally fitting that the last words should come from the marketing department. By now, that should not be a surprise. In 2005, adidas, in its publicity for the Teamgeist, let us know that the ball was expected beat all soccer-ball sales records.

If I’m criticizing adidas and Nike and other ball manufacturers — and I sure as hell am — it is not because they are finding ways of selling more balls, it is because those marketing methods (the heavy-handed over-use of the word “New” is a sure sign the marketeers are at work) repeatedly paint the sport as making great advances because of this science (some of which, I feel, is closer to pseudo-science). When in fact, the evidence for these improvements is almost entirely lacking.

Is it possible that their science will not stretch far enough to take in notions of a ball designed to minimize damage? Or is it that the marketeers know when enough is enough, they know that slogans and silliness cannot be used when dealing with a serious medical problem.