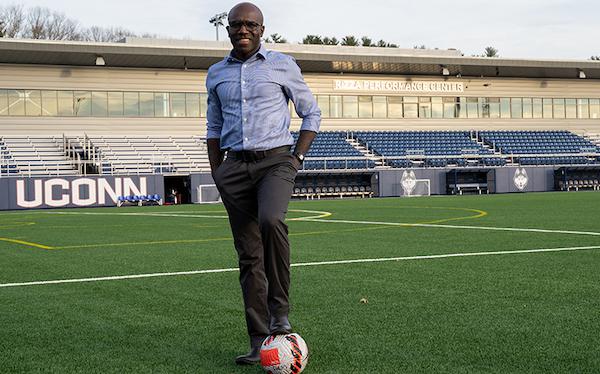 It’s unusual for a college soccer coach to stay in one place for 24 years. It’s almost unheard of for him to replace someone who was there even longer.

But when Chris Gbandi moved into the men’s soccer office at the University of Connecticut this year, he became just the third Huskies head coach in 53 years. Gbandi replaces Ray Reid, who took over in 1997 from Joe Morrone – and he’d been there since 1969. (Don’t forget John Y. Squires. His two stints at Storrs totaled 26 years: 1937-41, and 1946-68.)

Those are big shoes to fill. But Gbandi has laced them up before, on the UConn campus.

His route there was circuitous. Gbandi was born in Liberia. His father, a semipro player, left for the United States when Chris was 5. His mother followed three years later.

They sought a better life for themselves and their family in Houston. When Chris was 10, he and his brother Sandy joined them.

Gbandi did not know anything about the University of Connecticut until 1995 – the year Rebecca Lobo led the women’s basketball team to its first national championship. Soon two of his Houston Hurricanes soccer teammates were recruited by Reid, and a pipeline began.

With fellow Hurricane and Liberian native Sam Forko, Gbandi headed north. “It was the best thing that ever happened to me,” he says. He’d always imagined himself at Southern Methodist University, closer home. But the “people and passion” at UConn won him over. (He adapted to the New England weather too, he laughs.)

Reid was “demanding, but passionate about the game, and winning,” Gbandi says. “I struck that chord with him. He told me if I came, we’d win the national championship.”

Reid’s prediction came true in 2000. Gbandi helped lead the Huskies to their first NCAA soccer title since 1981 – and won the Hermann Trophy in the process. He was also a three-time All-American.

The first overall pick in the 2002 MLS draft, he played eight pro seasons for FC Dallas, Miami FC and Norway’s FK Haugesund. In 2004, Gbandi was capped for the Liberian national team.

A sociology major, he had not considered coaching while at UConn. But as his professional playing career wound down, Gbandi looked for ways to remain in the game. When he called Reid for advice, his former coach invited him to join the staff.

As a volunteer assistant.

The new coach dedicated hours each day to learning what it takes to be a college coach, while also coaching youth soccer to pay the bills. (His wife Crystal, who supported his path, worked for the Hartford Courant newspaper.) 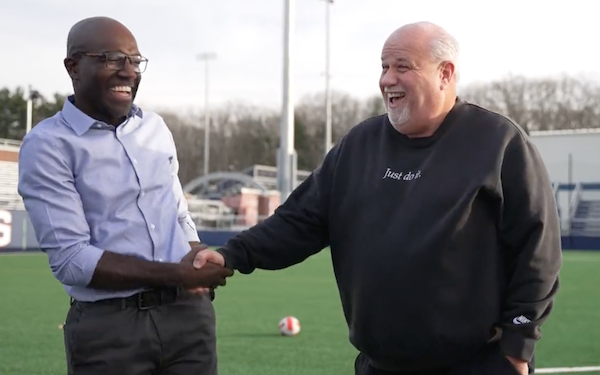 Ray Reid welcomes his successor, Chris Gbandi, to the UConn helm. The Huskies head coach from 1997 to 2021, Reid recruited Gbandi out of Texas and they celebrated the 2000 NCAA Division I national title together.

After stints as an assistant at College of the Holy Cross and associate head coach at Dartmouth College, Gbandi was named head coach at Northeastern University in 2016. The team (like UConn, called the Huskies) was 3-12-2 the previous year. During his tenure Gbandi led them to three Colonial Athletic Association tournament berths, Last fall, four of his players finished among the conference’s top 10 scorers.

When the UConn job opened up – a rarity – Gbandi was ready. He had no bigger supporter than Reid, who said, “I am so excited that Chris is coming home. He is an outstanding head coach, and an even better person who will serve as a tremendous leader and role model for our student-athletes. Winning is in his DNA. I cannot wait to watch his team play.”

Gbandi – who calls himself “more reserved” than Reid, who can be “fiery” – says that his playing pedigree, including his college connection, can help. “Players can see that I’ve done this, and see my competitive streak. I lead by example.”

This spring, he instituted a pressing style. Gbandi says that playing high “instills confidence.” The team had a successful season, but the new coach says, “I’m not reading too much into that. This fall, we’ll really see if it works.”

As with any coach who follows a legend – in his case, two – Gbandi must balance the present with the past, the legacy with the future.

“This is my show. But I’d be crazy not to pick Ray’s brain about different scenarios,” the new head coach says. “Any decision is ultimately mine. But I’m glad he’s willing to help.”

One area where Reid has already helped was fundraising for a new facility. The Huskies play in a beautiful new 5,100-seat soccer-specific stadium — named for Morrone. “That changes everything,” Gbandi says. “For a college team to have this says a lot about our school and program.”

Rabid University of Connecticut soccer fans are not used to welcoming new coaches. This year for Chris Gbandi, it’s been more like “welcome home.”