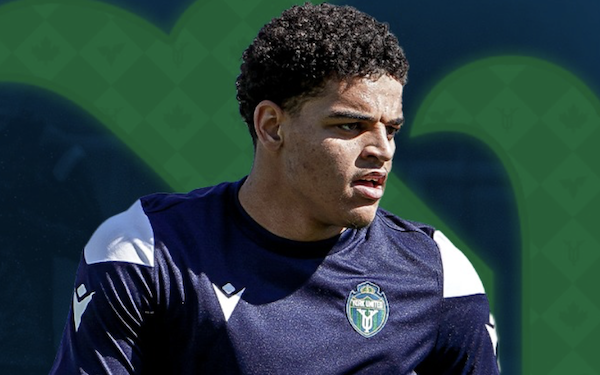 Less than three months ago, Osaze De Rosario  was a normal young soccer player trying to make a name for himself in his first season as a professional. After signing a three-year contract last September with FC Rukh Lviv, he made his debut in the Ukrainian Premier League shortly before the league’s winter break. When he returned to Lviv following the break, he found himself in the midst of a budding global conflict.

Russian troops began assembling along the Ukrainian border in great numbers. A full-scale invasion was imminent. De Rosario was trying to simply focus on his soccer, but when the U.S. government told its citizens in Ukraine to leave, De Rosario knew it was time to go.

“I was hearing there was a buildup, but I wasn't too focused on a war,” the 20-year-old De Rosario said. “I was thinking there was no way. Until it really started building up and people started calling me and asked what was happening. I wouldn't say I was scared, but I was definitely starting to ask myself what's the next thing?

“There were a lot of things going through my mind. Then the President of the United States said all citizens had to leave and then it hit me that this is getting very serious. When I left, I was like — is this really a war? Is this really real? Am I really leaving because of these things?”

The path that brought De Rosario to Ukraine was a winding one. The son of one of Canada’s greatest soccer players, De Rosario was passionate about the sport at an early age. He first began earning recognition with the NYCFC academy before he left to trial in Spain. It was there that he made the connection with Rukh Lviv, which eventually offered him a contract.

Playing in Ukraine taught De Rosario a lot. It’s a country that takes its soccer very seriously. In 2019, Ukraine won the U-20 World Cup, and its full national team is still in contention to qualify for the 2022 World Cup.

He enjoyed life off the field as well and felt it helped him mature both as a player and as a person. Located on the western side of the country, Lviv is one of the main cultural centers of Ukraine.

“You could feel the culture with the Eastern European vibe,” De Rosario said. “The football there is very professional. You know what you need to do. They know what they want from their players — especially me as a striker. They didn't speak the same language as me, but I had to understand. I had to grow as a player. It's a different style of play. It's a lot of work you have to put in in order to show yourself — not just from being a different player on the team but to become one of the main players. It was a very good experience and I liked it a lot.

“The city itself is very beautiful — beautiful people and everything. I've never been to a city that was built in such a way.” 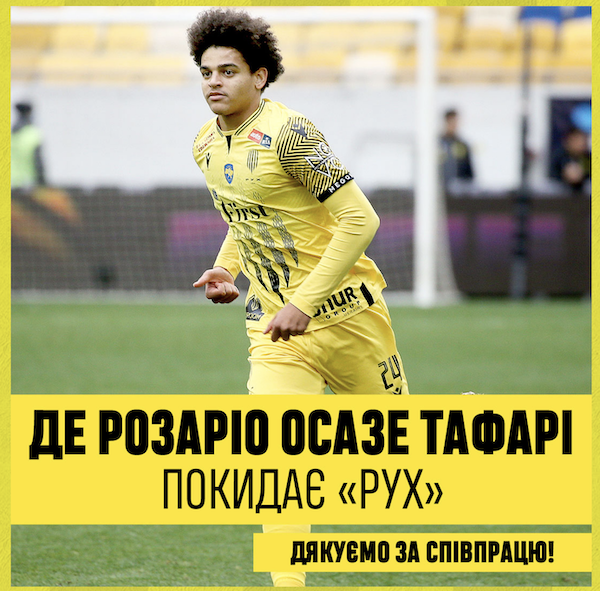 De Rosario was able to leave the club by mutual consent. Nine days later, on Feb. 24, the Russian invasion began and the Ukrainian Premier League’s season was put on hold. De Rosario still keeps in touch with his former teammates and coaches and notes no one has been injured in the conflict.

"I came here to Ukraine to play football," De Rosario said. "I represent my country and Ukraine. It was hard and it was sad. I felt bad, but I had to keep moving."

De Rosario returned home to the Toronto area to regroup. He had several opportunities, including ones in the USL in the United States. But he opted to sign a one-year deal with Toronto-based York United of the Canadian Premier League. The deal also includes club options through 2024.

The Canadian Premier League is only in its fourth season, and it has dealt with challenges such as playing amid the COVID-19 pandemic and with MLS competition in its three biggest markets. But De Rosario has relished the opportunity.

“The first thing was regrouping back in Toronto,” De Rosario said. “Once I did that, my father and I figured out what was next. York United brought me in to train and stay fit, and an opportunity came from it.

“The league itself is a professional league. I have a lot of respect for this league. You see a lot of players coming out of this league and moving to higher levels. It's a great thing that Canada has its own league because this is a soccer-playing country. We have great soccer players and you can see that on the national team.”

For De Rosario, returning home to Canada meant stepping into full view of the legacy of his father, Dwayne De Rosario, a four-time MLS champion in the 2000s and a seven-time MLS All-Star. The younger De Rosario does not try to shy away from his father’s history in Canadian soccer as he strives to build his own reputation.

York United is coached by Martin Nash who is the younger brother of Steve Nash – an NBA Hall of Famer who is a co-owner of the Vancouver Whitecaps. Martin Nash was also a former teammate of Dwayne De Rosario on the Canadian national team. Asking him to talk about Osaze frequently raises comparisons to Dwayne, but Nash quickly turns the discussion back on Osaze. 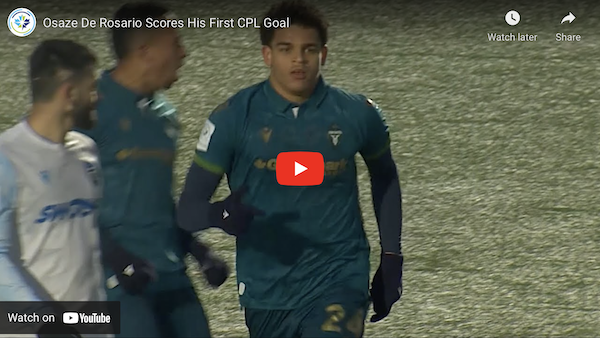 "He's a bright young talent, he's got a lot of technical abilities, he's got pace, he's got power, he's got strength, he's got good size," Nash said of Osaze. "Don't worry about the family name. I played with his dad — a great player in his own right. But Osaze is his own man. [He's a] different type of player. He's really strong, holds the ball really well. He's very physical, good in the air. He's a very young talent but a great kid with a great work ethic."

Thus far Osaze is off to a flying start with York United, having appeared in each of its first four games. He has assumed the club’s starting striker role and has scored in his last three games to sit tied atop the league’s leading scorers list. His first two goals against FC Edmonton and Calvary FC were spectacular strikes outside the box. His last one against Atletico Ottawa was from the penalty spot after he drew the foul.

On Friday, De Rosario will look to score in his fourth straight game when York United hosts Forge FC. 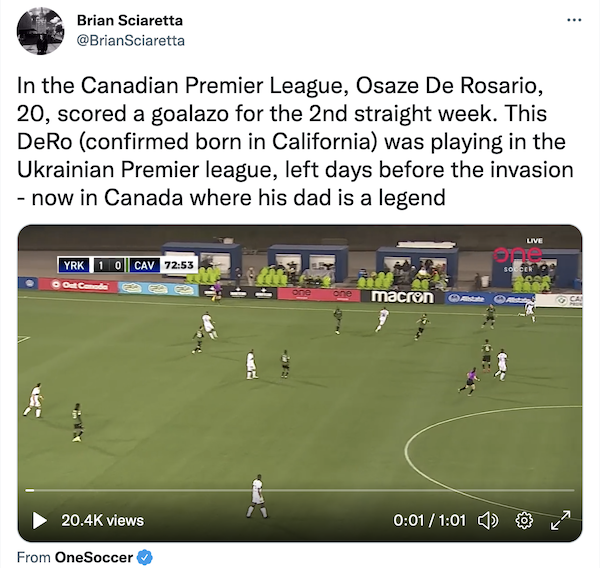 “When you have a good start to a season, especially in a league I have never played and against new teams and new defenders — you have to study and go through all of that,” De Rosario said. “It definitely feels good to start off the season well, but it's only been three games and it’s a long season. It's all about maintaining it.”

These are indeed fun times for De Rosario and he is happy to see his career get underway now without interruption. For all of his family’s involvement in Canadian soccer, the younger De Rosario was born in San Jose while his father played for the Earthquakes. A significant percentage of his life has been spent in the United States as his father played 10 seasons with American-based MLS teams after he was born.

Throughout his childhood, De Rosario has watched both the United States and Canada grow in soccer to the point where both have qualified for the 2022 World Cup, and both will co-host the 2026 tournament. A more modern MLS, which his father helped create, has been a major driver in the player development of both countries.

“It is intriguing to see both of my home countries going to the highest levels at the World Cup, especially this year,” De Rosario said. “But having front row seats to it isn't my thing. I am trying to get on the pitch — to play with either national team because it would be an honor to play with either.”