Dave Johnson on the magic of sports, his remarkable soccer broadcasting career, and battling multiple sclerosis 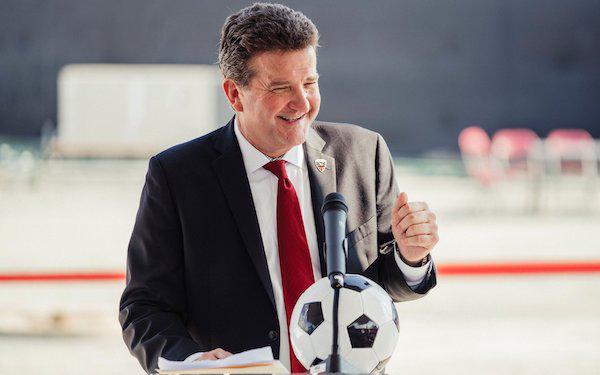 Dave Johnson, D.C. United's play-by-play man since its 1996 launch, started his soccer broadcasting career in the 1980s. He is also the voice of the NBA's Washington Wizards and WTOP Radio's sports director and morning sports anchor.

SOCCER AMERICA: What are your earliest memories of developing an affinity for soccer?

DAVE JOHNSON: I remember the Pele game against the Dallas Tornado on CBS in 1975. That was about the time where I had been playing in my area. I was curious about it then. I vaguely remember that game — and the first game of the Washington Diplomats against the Philadelphia was on television and I remember that. I really wanted to go to a Diplomats match that summer but never did.

I vividly remember my first Diplomats match in 1979. We beat the Fort Lauderdale Strikers 2-1 at RFK. That summer I went to a lot of games because I was the whopping age of 15 years old — I was allowed to metro to games. Then Johan Cruyff came in 1980 and the rest is history.

SA: What role did soccer play in your life then?

DAVE JOHNSON: Sport has always been magical for me. My mom had multiple sclerosis so she was always in a wheelchair. When we were at sporting events, it was always a special time.

That 1979 Strikers game was the last game she was able to attend before she died later that year. Soccer took on more meanings ... Its link with me is very emotional for me. It helped me through and gave me a positive light in very dark periods. Having a passion for something is huge because we all go through challenges.

That summer in 1980 was a year after my mom died — but Cruyff was in town, we were getting big crowds and we're gonna host the Soccer Bowl. It was a magical year.

SA: The importance of sports for providing an escape and sense of community ...

DAVE JOHNSON: I mean, that's everything. That's what it's all about. That's why I don't lose my head about winning and losing. That doesn't mean I don't have a passion to win, but what it's all about is the connections you make and time you spend. Major League Soccer and D.C. United is a great example of that. How else would you have this connection of lifelong friends if it wasn't for soccer giving you an excuse to bring you all together?

It's cliche, but it's true: the K-street lawyer is right next to the construction worker and there's a common bond.

My favorite time is still looking in RFK Stadium and seeing people come in and for those two hours, it's not going to matter what's happening in their life, or job, or whatever — it might just matter that they got a free T-shirt thrown at them.

You get frustrated with a loss, but isn't it so good to care about something so much that it does sting a little bit? If you focus on the positive, win or lose, you're always going to come away a winner — at least I believe. That's still what it's all about. 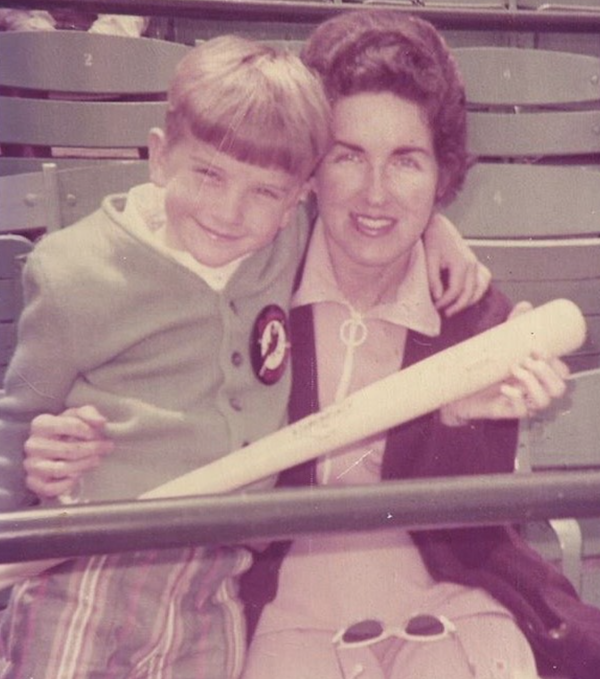 SA: You’ve spoken about the importance of your mother in your early broadcasting career ...

DAVE JOHNSON: She had multiple sclerosis, which I have now. She was in a wheelchair — talk about having a captive audience. I would cut out lines of the newspapers and do imaginary baseball and basketball calls — there wasn't really soccer in the area until 1975. But I had an audience of one and she always provided me the platform to be creative. It was special then and even more special now that I'm doing it for a living.

In some ways, I'm doing what I did when I was 6 years old. Hopefully I'm a little bit better.

SA: You've been D.C. United’s play-by-play broadcaster since in its inaugural season. What was it like to broadcast from RFK Stadium, the same stadium where you watched the Diplomats in your childhood?

DAVE JOHNSON: A dream is coming true. I went through the pain of losing the Diplomats in 1980. They were covering us on the nightly news, we were averaging 20,000 fans a game, the Soccer Bowl sells out — happy days are here. Then when that Diplomats team and the NASL folded, there was nothing.

I got out of college in 1986, and I wanted to be a soccer broadcaster. It wasn't the best idea for a vocation at the time because there was barely any professional soccer.

I connected with the legendary Gordon Bradley at the ASL, who's still one of the finest people I'll ever meet in my life. It's those types — Bradley, Clive Charles, Clay Berling — that made these conversations possible. Soccer America — it was the most exciting thing when I got home from school and my Soccer America was there. That was such a thrill because there was no internet but there was Soccer America. We log on now, but I'm still reading some of the people I've read since way back.

Gordon Bradley was the president of the Washington Stars and I was doing radio for them. Fast forward and we have a league, fans — this is what I always hoped it would be.

That [MLS] first game, 20,000 people showed up. I still remember that it was right before the All-Star game in 1996 and we had a tropical storm moving through our area. I'm thinking, 'Oh boy, only 500 people are going to be at RFK tonight.' Instead we got 20,000. It was one thing after another that gave me joy in that first season of 1996. I still remember Carlos Valderrama got red-carded in that game. In the pouring rain, he strutted about 75 yards to go out of the game — the tunnel to the visitor's locker room was at the other end zone.

To go to RFK after so many years, after saving up as a 16-year-old for season tickets ... It's hard to express what it means. 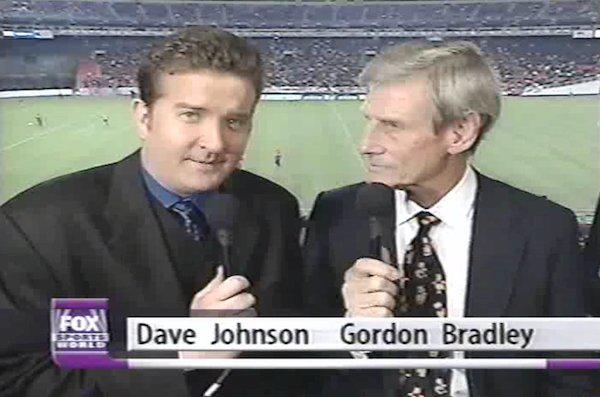 SA: Which broadcaster did you learn the most from or look up to the most during your formative years?

DAVE JOHNSON: I think Jim Karvellas. I was also a basketball fan and he went onto to do the New York Knicks. I can still hear him say, "Chinaglia! Yes!" He had the perfect situation because he was doing the NBA and NASL. At that time, soccer was a sport that some people made jokes about. He was a mainstream guy who appreciated it and not only gave it a chance but helped promote it.

Everything about him — the certain warmth and kindness with the way he went about his broadcasts.

SA: An up and coming broadcaster you enjoy listening to?

DAVE JOHNSON: I know it sounds crazy, but I love listening to Matthew Ponter on Radio Hereford on the Hereford FC app — they’re a sixth division team in England.

SA: Your goal call, “It’s In The Net!” is legendary. Do you remember the first time you used it?

DAVE JOHNSON: It was during indoor soccer. I don't remember the first time. This was pre-social media, remember, and suddenly people started mentioning it to me. Then I started doing it more. It was borne out of the goal moment — the exciting moment. It's meant to be what it is, an expression of the emotion.

DAVE JOHNSON: Just be yourself. It sounds cliche, but you're going to find out who your self is and you're going to think about things — it's like any craft, it's important to be your authentic self.

I always put it like this: if a consultant had gotten a hold of John Madden, we never would've had John Madden. A consultant would've molded him into something he wasn't. It's important to be who you are. Who I am is not based on a silly giddiness — games have always been happy and special times. Whether it's March at the start of the season or when the season is on the line in the playoffs. 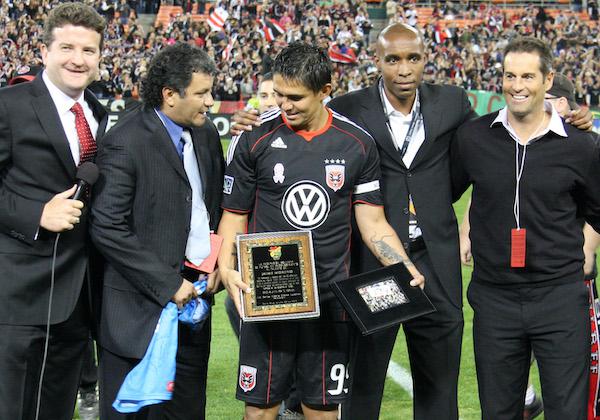 DAVE JOHNSON: When we beat the Columbus Crew in 2012 to get into the playoffs at RFK. Lewis Neal scored the final goal. Just the emotion of that night — we hadn't been in the playoffs since 2007. So I point that game out just because it's a combination of a lot of things going on there. We had been such a storied club and then all of a sudden there were four seasons of not getting it right. That game definitely comes to mind.

The opening game at Audi Field with Wayne Rooney — the moment where you're saying, 'There's a soccer-only stadium in D.C.!' I remember losing a pro soccer team out of RFK. I remember and an American Soccer League team that couldn't get 2,000 people to RFK. Now, all of a sudden, we're in the heart of the city. You look to the right and you see the capitol and you look to the left and you see the monument, for goodness sakes.

That always will stand out. It was truly a surreal moment.

DAVE JOHNSON: I remember calling a Maryland Bays [APSL] game in Salt Lake City against a team called the Salt Lake Sting. They were this team that had done well at the gate but all of a sudden had lost their ownership. I remember that they had a big crowd there — this was 1991. But as we're walking out of the stadium that night the coach was saying that if they didn't get an owner in the next two weeks they would have to fold. And they folded.

There was sadness there because that was a period of time where — there had to be 6,000 people there that night, a huge crowd for the time, but they didn't have an owner. That period of time of the late '80s and early '90s — you're hoping the league survives but teams are folding. Ultimately, the Maryland Bays ran out of money too.

So I guess my bar is a little bit different. If the league is still thriving, I'm happy.

SA: Your battle with MS has been covered before. Would you be willing to share with the Soccer America audience how you are doing? Has it gotten harder to do your job?

DAVE JOHNSON: Yeah, I'm fortunate to be in a position where I can raise a lot of money for multiple sclerosis. This year we found several sponsors and raised over $100,000 at a George Mason hockey game. This is the disease that claimed my mom's life. I'm committed that this must be part of my calling — to try to get us to a point where we have a cure.

I have not slowed down. I view MS as a competition — if MS is going to hang around with me I'm going to make sure it gets tired. I've got a new normal and anyone who has MS appreciates that there are challenges. My symptoms don't change day-to-day — I don't walk as gracefully as I once did but I never was that graceful. It's just a new normal.

MS is the most expensive diseases to treat so I'm just lucky to have insurance that I can rely on but not everyone is that fortunate. So, we do what we can to make life better for MS people.

Last year, D.C. United produced this 8-minute piece recounting the career so far of Dave Johnson, with tributes from Bruce Arena, John Harkes, Ben Olsen, and many others: 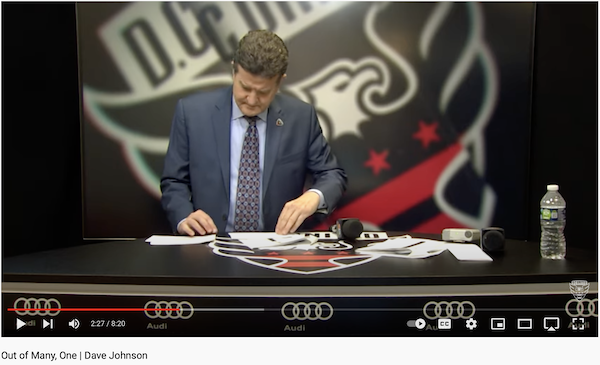