Road to Qatar: 'Moment of hope' for Ukrainians 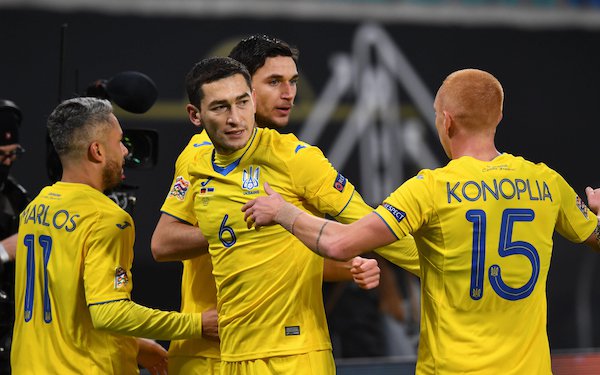 Ukraine, which has not played an international men's match since Russia invaded, will play German club Borussia Moenchengladbach Wednesday at Borussia Park.

The match is a fundraiser with all profits going to charitable efforts in Ukraine.

It will also be a test for Ukraine as it prepares for potentially five games in June, the most important being the delayed UEFA playoffs to determine the team that will join the USA, England and Iran in Group B at the 2022 Word Cup.

For Wednesday's match, Ukraine will use players from the Ukrainian Premier League, which suspended play on Feb. 24 when the Russian invasion began. Head coach Oleksandr Petrakov has been working with 23 players at a camp in the Slovenian Alps.

The Gladbach match is an important test.

"Not like it's a friendly," Petrakov said at a media conference last week, "but like it's an official match, because it's the only opportunity for us to have good preparation."

At 32, Taras Stepanenko is the oldest player in camp. Since 2010, he has played for Shakhtar Donetsk, based in Ukraine's Donbas region. Shakhtar Donetsk, awarded the 2021-22 league title, had to flee its home in 2014 when war broke out between Russian-backed separatists and Ukrainian forces and has enjoyed a nomadic existence since then, playing its games in Lviv, Kharkiv and Kyiv in different parts of Ukraine.

"Every day we receive messages from our soldiers," Stepanenko said. "A lot of soldiers, a lot of people in Ukraine love football and they [have] only one demand: 'Please do everything you can to go to the World Cup."

He understands what's at stake.

Petrakov, 64, has spent the last 30 years as a coach, the last 10 with Ukraine's youth national teams before being named the senior national team coach last August. It did not lose a game but finished second in its group behind defending World Cup champion.

When the qualifying campaign ended in November, there was no war. It had not yet taken on the significance it has now.

“I’m at such an age where I don’t want anything: no house, no car,” Petrakov said when he met with reporters last week. “But if I take the team to Qatar, I have lived my life for a reason.”