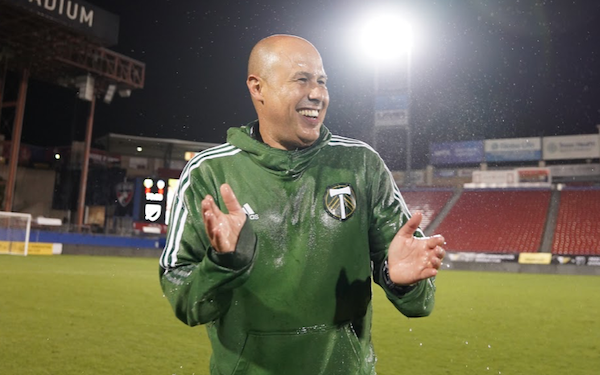 Fernando Pessoa, who grew up in the Olaria neighborhood of Rio de Janeiro, recently coached the U-15 Portland Timbers academy to victory at the 2022 Generation Adidas Cup. The championship came as a surprise to many in the MLS academy scene for the mid-standings Timbers struggled to notch results against their league opponents in the regular season.

After qualifying out of the group via a sensational penalty shootout against the Philadelphia Union, the Timbers beat Manchester United, the New York Red Bulls, and LAFC before besting Valencia 2-0 in the final.

It marked the first time an MLS academy has won the age group at the annual youth tournament.

SOCCER AMERICA: Describe your role at the Timbers and the nuances of the U-15 age group at the MLS academy level.

FERNANDO PESSOA: The U-15s is the last year with individual age groups [i.e. age-pure]. When they go to the U-17 level, that combines 16- and 17-year-olds, and they are suddenly the younger side of the age group. That's a big jump. It's a jump I really enjoy to be apart of.

It's about learning how to be more professional and exposing them to processes they will need to accomplish when they get older. For example, learning how to analyze a video. How to analyze themselves. When they get older, it becomes a lot more specific and the tactical elements become more specific. I try to teach them those things now so those areas don't come as a surprise. That's just one area.

Working their individual aspects but being part of a team, in general. These combination of factors is very important the day will come when the team is a collective squad, as much as we try to make it about individual development. You need to learn how to link your strengths with someone else's weaknesses. How to understand you have weaknesses and you're going to need a partner with certain strengths so that they can complete each other. 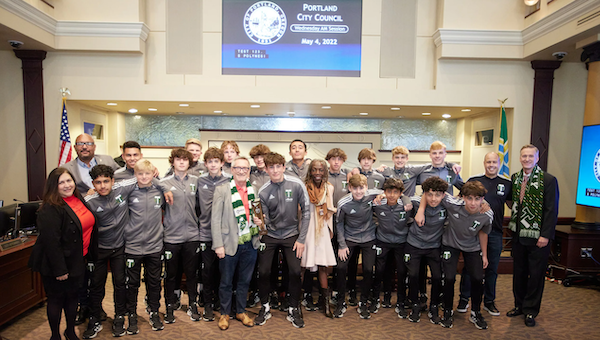 SA: The U-15 age group is tricky because some boys have hit puberty and some have not ... how do you reconcile a player’s limitations with the fact that he hasn’t finished growing physically?

FERNANDO PESSOA: It's a case-by-case. We are happy to have a full staff that are working in their special areas — how you work in the gym, etc. The most important piece, though, is to be patient with the process. Everyone is different. Sometimes a player will hit puberty but the personality is still different. Just because he's a strong guy doesn't mean he's an adult — because he's not. He's still a teenager.

The physical element is part of something — the psychological element is part of that too. We need to try and understand where they are as a teenager. The changes in school, starting to have girlfriends, people start to change their social life. Being able to understand those differences, and having patience and engagement with the process — I think that's very important.

SA: Tell me about your early soccer life. Where did you grow up and do you have a first memory of playing the game?

I grew up in Rio de Janeiro in a neighborhood called Olaria. I played futsal a bunch, playing in the streets — that's how I grew up. Then I tried to play in clubs. I played at a youth stage but didn't sign pro. The competition was very high — that's life. But I was accepted into a physical education college and started a new career right away.

SA: Did you always know you wanted to be a coach?

FERNANDO PESSOA: I started college to be a fitness coach. In soccer, mainly. That was my goal. One of my old fitness coaches from my playing days gave me a chance to be his assistant. That was August of 1998. I started to move more into a coaching position and that's where it began.

From there I started to put more emphasis on coaching and preparing myself to go into that area.

SA: How did you find your way to the Timbers? Describe the academy environment you encountered when you arrived in Portland.

FERNANDO PESSOA: First, I came to Portland through the Billups Foundation. That's where I met the people at the Timbers and got a chance to be apart of their setup. That was 2017. It was a learning process for me because the soccer setup in the USA is a little bit different than the places I've been. I had a lot of support from the people around me to help me understand how club soccer works, how MLS works, the college process, etc. It was not a difficult adjustment because at the end of the day, the objective is the same. Develop players and people, represent the clubs, represent the city.

SA: Coming from Brazil, talk about some differences between how things are run, the playing and coaching philosophy, compared to Portland?

In terms of coaching philosophy, a lot has changed with the coaching courses, technology, all of that. Because everyone has access, things are closer than they were 10 or 15 years ago. It's nice to see us coaches be able to evolve and connect with coaches all over the world — exchange experiences, etc. Twenty years ago, we didn't have that. 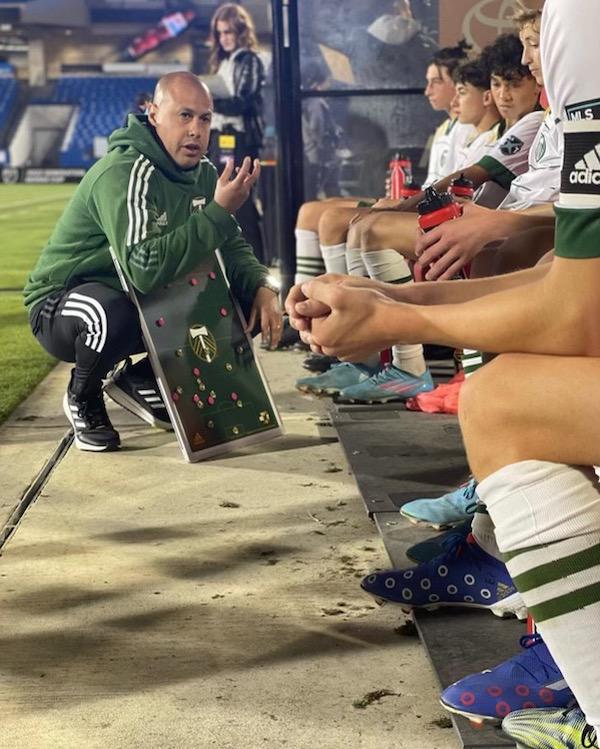 SA: Let’s talk about the Generation Adidas Cup run for your U-15 run. What were the expectations going into that tournament in terms of performance? What would you have been happy with?

FERNANDO PESSOA: Happy? Lift the trophy [laughs]. The expectations there were to be realistic. We weren't having a good season in terms of results. We were able to compete in the majority of the games but we weren't getting results. We had players get called to the national team camps but we weren't seen as favorites. And we were realistic about that. Let's compete as best we can and have a lot of respect for our opponents no matter who we play.

We made a plan to go game by game, respect the game and our competition. Once we saw we had a real chance to advance out of our group, that boosted our belief. The guys were very focused and happy to be there. We had that insane game with Philadelphia going to PKs and deciding the group placement. So we advanced — mission accomplished, right?

And then we get Manchester United. World giant. We were up early, another boost of confidence. Mentally we were really solid. Of course, we were excited — you should get excited when you win games. How we handled those big games mentally was a big ally.

Learning how to hold pressure against teams who are very good ... we did our part.

SA: How would you rate the academies you played against? Would you view your team’s performances as a series of upsets or simply that you outplayed other academies?

FERNANDO PESSOA: If you look at those games, I'm not going to say we outplayed anyone. I'm not in the position to evaluate that. We had important games and important performances against big clubs. There were definitely a few upsets from our part. We weren't the favorites and we understood that.

SA: Talk about the interactions between the academy and first team in Portland.

FERNANDO PESSOA: Fortunately, we have Timbers 2 coming back and that plays a huge part. We all know that the first team leads a different life — we can't expect them or their staff to be interacting with us. It's not realistic. But we have a very good atmosphere in the club, where people know each other, talk to each other — it's a good, diverse culture.

The relationships aren't forced — with these relationships there on a daily basis, I think it's natural that our players feel comfortable to interact with the big guys. The T2 plays a big piece of that. We have players in the academy in the T2 — the club is open and happy for that to happen. It's natural. Having the first team send messages to our boys during the GA Cup was unbelievable. The players receiving that was something they'll never forget. Same as T2. I think the club in general facilitates that relationship.

SA: For a country that produces so many great soccer talents and has such an amazing soccer culture, and has a solid immigration population in the USA, there aren’t a ton of Brazilian coaches in the American game. Why do you think that is?

FERNANDO PESSOA: The U.S. does produce a lot of coaches — certificates, courses, badges, it's a big country with a lot of coaches. Of course, there are visa problems for foreigners — Brazil has a lot of soccer going on, so maybe coaches have a career over there. I'm grateful Brazil can export coaches to other markets as well, like in Asia.

I don't know. I think partly it's about opportunity. I had an opportunity to come to a position that was available and open to have me. Like I mentioned, the relationship came naturally. It's difficult to evaluate that because it's a personal experience. Some guys have come over to play and now coach. There's not a problem or anything, just probably more about opportunity.

SA: What advice do you have for coaches at the mid-teen level?

FERNANDO PESSOA: I would say be patient. Understand that the young guys can be young pros but they're not adults. Respect the differences of every individual and try and figure out what they need, in general.

Be patient with the process, understand differences, and be positive about it. Enjoy the competition — we're not perfect, the players won't be perfect. Treat them with simplicity. And of course, work and study. As much background as we have, we cannot stop our education.