U.S. Open Cup draw: El Trafico among five first-time matchups in round of 16 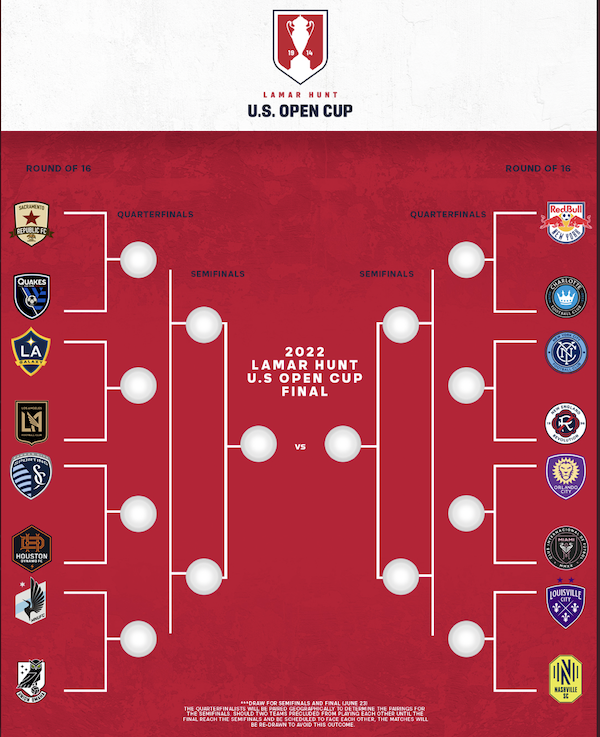 The first Open Cup El Trafico derby and a meeting of the 2021 MLS Cup and Supporters' Shield winners highlight the draw for the round of 16 in the 2022 U.S. Open Cup.

The LA Galaxy and LAFC have played 14 times, including games in the MLS playoffs and MLS is Back Tournament, but they will play for the first time in the Open Cup.

Reigning MLS champion NYCFC and the New England Revolution, the 2021 Supporters' Shield champion, will also meet for the first time in the Open Cup.

Of the five MLS matchups, only one features teams that have met before in the Open Cup. Sporting Kansas City and the Houston Dynamo will meet for the fifth time in the past six editions of the tournament. Sporting KC won in 2015 and 2017 when it went on to win their third and fourth championships, while the Dynamo won in 2016 and 2018 (when it won its only Open Cup title).

Louisville City will host Nashville SC. In 2018, LouCity won their round-of-16 match when Nashville SC was in its first season in the USL Championship. Sac Republic FC will be looking for its first win in four meetings with the San Jose Earthquakes in the Open Cup.

• Loons triumph. The field was completed on Thursday afternoon when Minnesota United beat the Colorado Rapids, 2-1, in a match that had been suspended with the scored tied 1-1 in the 18th minute on Wednesday due to heavy rains.

Emanuel Reynoso came off the bench to score in the winning goal for the Loons in the 87th minute, four minutes after they lost defender Brent Kallman to a red card.