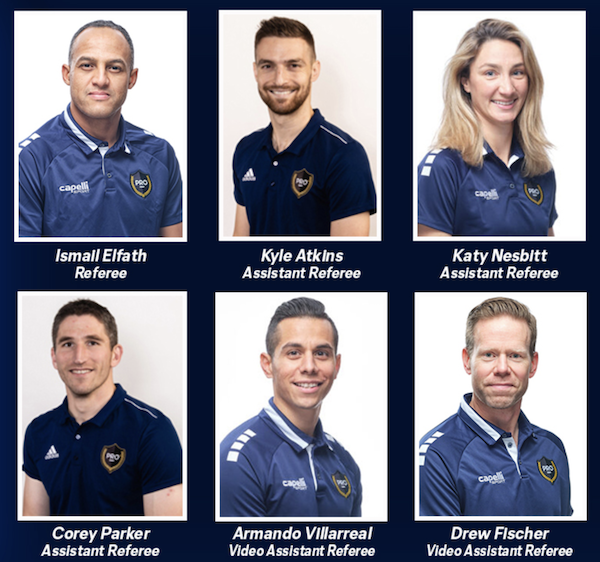 Five Americans — one center referee, three assistant referees, and one video match official (VMO) — are among the 129 officials selected by FIFA to work at the 2022 World Cup in Qatar. The sixth referee from the Professional Referee Organization (PRO) is Canadian VMO Drew Fischer, who's worked in MLS since 2012.

“We are delighted that the years of dedication and commitment these officials have invested to develop their skills and serve the game have been rewarded through selection to this prestigious event," said PRO General Manager Howard Webb.

The 2022 World Cup marks the first men's World Cup to include female officials, with three women center refs and three assistant refs. Among them is assistant refs is Kathryn Nesbitt of Philadelphia.

Also among the 69 assistant referees chosen are Americans Kyle Atkins of Kansas City and Corey Parker of Virginia.

Atkins, who has served the Heartland Soccer Association and made his pro reffing debut in MLS in 2014, ran the lines at the 2021 Olympics and 2019 FIFA Club World Cup.

Pennsylvania native Parker, who works in internal audit and cybersecurity for Washington, D.C., area firm Baker Tilly, made his pro debut in MLS in 2011 and worked the 2021 Olympics, 2019 FIFA Club World Cup, 2019 U-20 men's World Cup.

Armando Villarreal of San Antonio, Texas was selected as one of the 24 video match officials. He made his pro debut in MLS in 2012 and has worked at two Gold Cups and the 2016 Copa America Centenario. Villarreal became a FIFA VMO in 2021 but continues to ref on the field. Villarreal center-reffed the 2021 MLS Cup and the 2021 MLS All-Star Game.

The 1950 World Cup in Brazil was the first to include a U.S. official and Prudencio Garcia ran the line in four games. Leo Goldstein served as assistant referee in two games at the 1962 World Cup.

At the 1970 tournament in Mexico, Henry Landauer of California became the first American to serve as a center referee at the World Cup when he took charge of Sweden-Uruguay in group play. David Socha was selected for the 1982 and 1986 World Cups, Vinnie Mauro in 1990, Arturo Angeles in 1994, Esse Baharmast in 1998 and Brian Hall in 2002.

After three (Greg Barkey, Kevin Stott and Chris Strickland) were selected, albeit as unused standbys, in 2006, no Americans were appointed for the 2010 World Cup.

In 2012, U.S. Soccer and MLS collaborated to launch PRO to manage refereeing for pro level in the USA and Canada.