At its meeting on Friday in Dallas ahead of the National Soccer Hall of Fame weekend, U.S. Soccer's board of directors was presented with a look at how the federation did financially for FY2022, which ended on March 31, 2022.

In 2021, the National Council approved a budget with a deficit of $40.6 million, but the preliminary close put the deficit at $19.9 million. The federation would have finished with a surplus of $4 million, but it has put the $24 million settlement of its litigation with members of the women's national team in FY2022 even though it will be paid out over the next four years. 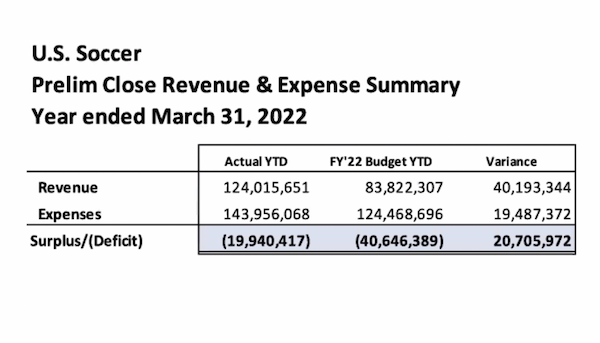 Chief financial officer Pinky Raina, who presented the financial update on U.S. Soccer’s current financials, said the budget had been done in the fall of 2020 before a Covid-19 vaccine was available and national team matches in 2021-22 had fans in attendance at much higher rates of capacity than was taken into consideration when the budget was done.

U.S. Soccer CEO Will Wilson said that of the 60-70 recent applicants for coaching jobs on the women's side of the national team program, just six were women, and there were no female applicants for jobs on the men's side. He said one of the themes about the coaches initiative is that it isn't just a gender issue but a diversity issue.

Oguchi Onyewu, the vice chairman of the Athletes Council, said U.S. Soccer needs to acknowledge the disparity within Black representation across the entire soccer landscape. He said U.S. pro leagues have taken the lead to remedy the numbers, but in terms of "soft numbers," of 125 pro clubs, "about 65% had white head coaches, under 8% were Black, about 11% Spanish or Latino and 14% other."