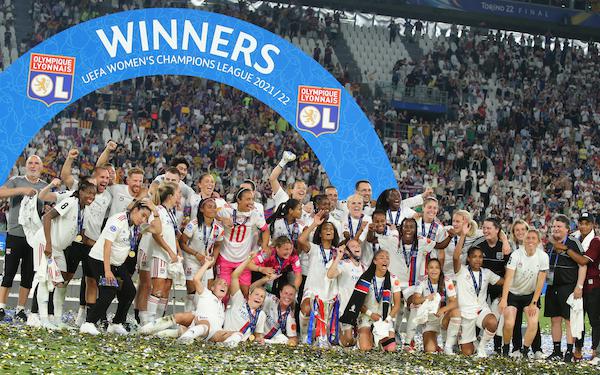 For the first time since UEFA launched the Women's Champions League in 2009, a pair of Americans were crowned champions.

Macario completed a first-half blitz with Lyon's third goal after 33 minutes, tapping in a ball that center forward Ada Hegerberg played across the goal area. She became the first American to score in a European women's final with her team-high eighth goal in 13 Champions League games and 21st goal in 32 games in all competitions this season for Lyon.

Amandine Henry and Hegerberg earlier scored goals for Lyon, while 2021 Ballon d'Or winner Alexia Putellas pulled one back for Barcelona late in the first half.

The start was just the fifth for Horan since arriving at Lyon this winter, but she has been excellent in Lyon's run to its record eighth Women's Champions League title. Horan, who was slowed by a knee injury earlier in the year, and Henry dominated the midfield against Barca, allowing Macario to get forward in the attack.

Macario and Horan are the fourth and fifth Americans to win UEFA's women's club championship, In 2008, Ali Krieger and Gina Lewandowski started for FFC Frankfurt when it won the UEFA Women's Cup. Alex Morgan started but was injured early in Lyon's shootout victory over Paris St. Germain in the 2017 final.

Bright future. Lyon coach Sonia Bompastor, who played for the Washington Freedom in WPS in 2009-10, became the first woman to win Champions League titles as a player (2011-12 with Lyon) and a coach. She was promoted from her position as OL academy director after Lyon was eliminated by PSG in the 2021 Champions League quarterfinals, ending a streak of five straight seasons with Champions League trophies.

Bompastor started a pair of 21-year-old players, Selma Bacha and Melvine Malard, whom she had in the academy program. Horan, who will be back next season, and center back Griedge Mbock Bathy are both 27 and at the peak of their career, Hegerberg, recovered from a knee injury, is only 26, winger Delphine Cascarino is 25, so along with Macario, 22, Australian Ellie Carpenter, also 21, Bacha and Malard, Lyon has a nucleus that is capable of starting another run of Champions League titles.

Reminiscent of 2019. Lyon's victory was reminiscent of the 2019 Champions League final in which Lyon beat Barcelona, 4-1, with all four goals in the first 30 minutes.

Barca came into 2022 Champions League final as the favorite, though. It won the 2021 Champions League with a 4-0 win over Chelsea in the final and began the 2021-22 season with 40 straight wins in all official competitions before losing to Wolfsburg 2-0 in the second leg of their Champions League semifinal. It finished with a 30-0-0 record in the Spanish league, outscoring its opponents 159-11.

• Macario:"Barcelona were incredible. But I'm just really happy that we were able to start the game so well, getting those three goals in the first half really helped. I think it just came out, we were the team that showed up the most today, and we had the most experience. So thankfully, we were able to come out on top."

• Horan: "Well you can probably see it in my face. I've been dreaming of it since I was a little girl watching the men's Champions League... It is everything. Coming out in the first half and playing like we did and scoring like we did [was key]. It was incredible."