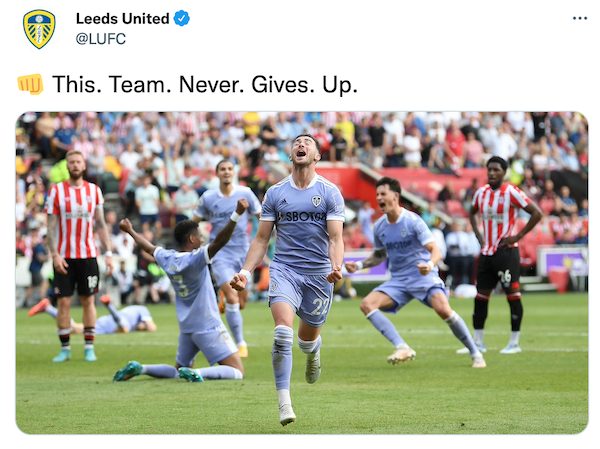 American Jesse Marsch  took the Leeds United helm, replacing Marcelo Bielsa, on March 1, after Leeds United had conceded 21 goals in six games. It was in 16th place, two points above the relegation zone with a  5-13-8 (W-L-T) record.

On the last day of the 2021-22 English Premier League season, Leeds United beat Brentford away, 2-1. The result, combined with Burnley's 2-1 home loss to Newcastle United, earned Leeds a 17th-place finish, three points ahead of Burnley, which joined Watford and Norwich City as this season's relegated teams.

"Staying in the Premier League was our objective this year and we’ve managed to obtain our top-flight status, but this is not success and improvements are needed," Leeds owner Andrea Radrizzani wrote on the club's official web site. "As a board, we will work hard with Jesse Marsch this summer to improve the squad and find a way to deliver the kind of performances you all deserve.

"We believe that with time and a full preseason, Jesse will be the man to take this club forward."

Leeds and Burnley entered the final day of play even points but Burnley had a commanding goal difference advantage. Leeds' survival depended on Burnley giving up points against Newcastle, which took a 20th-minute lead on a penalty kick converted by Callum Wilson, who also made it 2-0 in the 60th minute. Maxwel Cornet  struck for Burnley in the 69th minute.

Raphinha gave Leeds United a 1-0 lead with a 56th-minute penalty kick. Segi Canos equalized for Brentford in the 78th minute and was ejected two minutes later. Jack Harrison, an Englishman who went to high school in the USA, spent one season at Wake Forest, and two in MLS with NYCFC, scored the stoppage-time gamewinner to sweeten the celebrations.

Leeds had earned only two points from their previous five league games, which included losses to Manchester City, Arsenal and Chelsea. Leeds United's EPL record under Marsch is 4-5-3 (W-L-T).

"There is so much to do," Marsch. "We have started the process in a good way and what we have from a resources and a people perspective means we are just scratching the surface. It's been a stressful time. We will have a meeting in a few days to build the roster and this club to represent what we want it to be. Teams always change. From the academy upwards we want to maximize its potential."