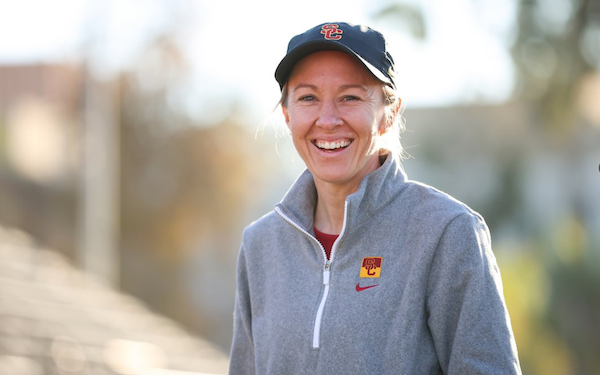 Last year, Jane Alukonis spent hours studying the University of Southern California soccer team. She probed for weaknesses; as a University of California at Los Angeles assistant coach, they were the crosstown opposition.

These days, Alukonis spends even more time sitting with those same Trojan players. She wants to find out what makes them tick, on the field and off. She’s the new USC head coach; they’re her team.

“It’s a different lens,” says Alukonis, who spent four years as a UCLA assistant coach. “I’m getting to know who they are, who they connect with and how. They’ve gone from people I worried about playing against, to players I’m trying to motivate.”

This is Alukonis’ first head coaching job. That’s unusual for a program as high-powered as two-time national champion USC. But her resume sparkles with plenty of soccer achievements, plus a few unusual detours off the field.

She grew up in Cocoa Beach, Florida. A defender and midfielder, she was selected for U-16 and U-17 national teams, then went to Duke University. “Everything about it was enchanting: the Gothic feel, the pitch and practice field, they strong academics.” On the field, she earned four ACC Honor Roll selections. In the classroom, she majored in political science and sociology, with a minor in psychology. In 2011, she added a master’s degree of philosophy in social and developmental psychology (with honors) from England’s University of Cambridge. 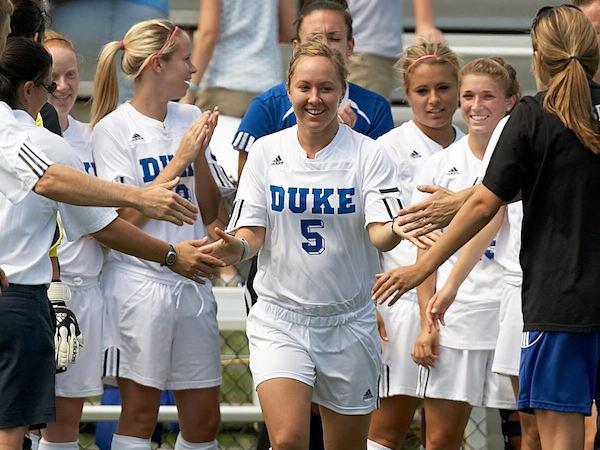 Alukonis never intended to coach. At Duke, she says, “people headed to traditional paths: law school, med school, banking.” She chose a different route: Teach for America. Working with 5th and 6th graders in a Baltimore school with no extracurricular activities, she joined a colleague who had played softball in coaching that sport. They added basketball, then soccer. “The kids had never played before,” she says. “We had so much fun.”

When she returned to Florida, Scott Armstrong – her former coach, now director of coaching at Space Coast United Soccer Club – asked her to help with a few teams, and take over a couple of others. From U-10 girls to U-15 boys, Alukonis got the coaching bug.

“It took total focus. There was so much adrenaline,” she recalls. “Win or lose, coaching was a great feeling.’ She had enjoyed teaching, but this offered more: She was outside; kids could be loud; they wanted to be there – and she helped them grow, and reach their potential.

Alukonis had known Amanda Cromwell since the coach tried to recruit her to the University of Central Florida, and continued to work her Sunshine State camps even after Cromwell moved to UCLA. When a spot opened up on the Bruins’ staff, Cromwell recruited her again. This time, Alukonis said yes and moved west.

It was a volunteer position for the first two seasons. She earned money coaching with the LA Breakers club, as well as middle school. She bought a townhouse near campus, and figured she’d be there “forever.”

Five months after moving in to her new places, after the 2021 season, Cromwell headed back to Florida, as coach of the NWSL Orlando Pride. UCLA hired Margueritte Aozasa. But when Keidane McAlpine left to coach the University of Georgia, the USC job came open too.

“The normal path is assistant at a top school, then you get the head job at a mid-major and build the program, then head coach at a Top 25 school,” Alukonis says. “I wasn’t sure I had a shot at this.” 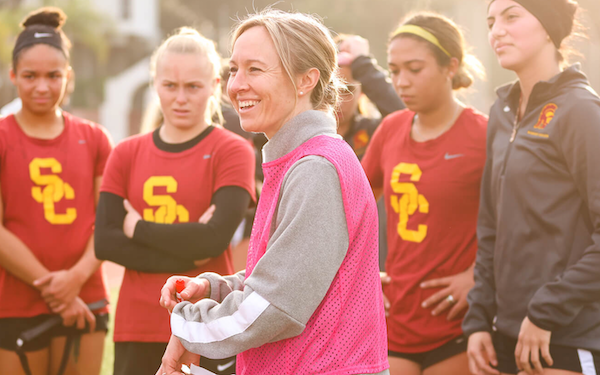 She prepared well. Drawing on her assistant coaching experience, she reviewed the Trojans’ team, culture and history. She watched hours of video. “I knew the program inside and out,” she notes. “They have national championship level talent. I had a plan. I made clear that our goal would be to compete for as many championships as we could.”

Alukonis is the first female coach of the Trojan women since 1995. That’s important, she says. Coaching club soccer, she was always given men’s logo gear. “I’d ask, ‘Did Johnny get the women’s stuff?’” she says, though of course she knew the answer. At times – especially when leading boys teams – opposing coaches assumed she was the athletic trainer.

Even in the college ranks, many women have never played for a female. “The more women coaches we can have, the better,” Alukonis says. “It’s changing, but it’s still disproportionate.” She enjoys being part of the growing network of female coaches, some of whom she calls for advice and others whom she helps mentor.

Since she was announced as the USC coach on Jan. 20, she has taken charge. Her first priority was hiring a staff. It did not take long to have her “dream team” on board.

Amy Rodriguez – who won a national championship as a Trojan, then added two gold medals and a World Cup title with the national team – has “knocked it out of the park,” Alukonis says. She knew Shigeyoshi “Sugar” Shinohara as an assistant coach at Arizona State University. “When I called his references, they couldn’t stop talking about him,” she adds.

World Cup champion Saskia Weber moves with Alukonis as goalkeeper coach, from UCLA to USC. The staff has spent the spring recruiting, training and playing, and preparing for fall. And Alukonis has been enjoying the chance to learn as much as she can about her Trojan team – once her opponents, now her squad.