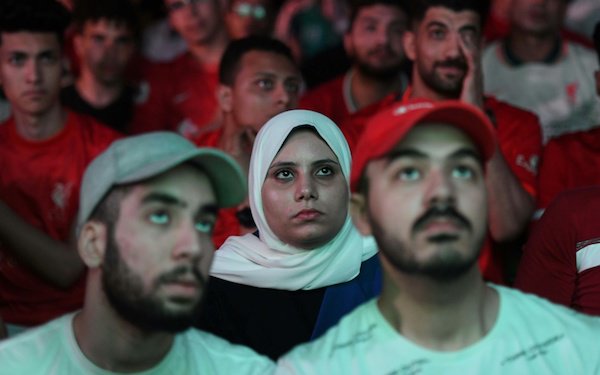 Donning Liverpool jerseys, Egyptian soccer fans cheered "Mo Salah! Mo Salah" even as they struggled to hide their disappointment over the Reds' loss to Real Madrid in the UEFA Champions League final.

It was another blow for Mohamed Salah, who was reduced to tears twice earlier this year following Egypt's losses to Senegal in both the African Cup of Nations final and the World Cup playoff.

To rub salt into his wounds Salah missed a penalty in the penalty shootout defeat to Senegal in the World Cup playoff.

In those matches, Liverpool's African stars Salah and the Senegalese Sadio Mane were on opposing camps. On Saturday, they suffered in defeat together.

"It's really not the year of Salah," said Youssef Mohammed, a 21-year-old accounting student, wearing a Liverpool jersey, at a Cairo park where a giant screen was installed for the match. "We had more chances, better ball possession, but less luck, so in the end, Real stole the victory from us", says 37-year-old Khaled Youssef.

Youssef, a leading member of the official Egyptian Liverpool supporters club, which has 215,000 followers on Facebook, says supporting the Reds and being Egyptian makes him "the least fortunate fan in the world."

For many in Egypt, where public gatherings are effectively prohibited, football offers a rare avenue for distraction away from daily struggles. including a heightened inflation rate that Moody's warned could raise instability and social tensions.

On Saturday, fans filled cafes across Cairo, sporting red scarves, waving flags to the Liverpool anthem of "You'll never walk alone," hoping for a victory against the Spanish club.

All prayed, danced, and chanted in the hopes of another Liverpool win similar to that of the 2019 Champions League when it beat Tottenham Hotspur.

"We have a score to settle," Salah said on social media moments after Real Madrid set up a rematch with Liverpool.

Heads slumped in Cairo as the referee signaled the match's end with Real Madrid winning 1-0.

"It is the latest disaster in a repeat scenario," said Amr Said, a 35-year-old engineer who is also a member of Liverpool's Official Egyptian Supporters' Club.

Liverpool were hoping to win its seventh European Cup which would have been the ideal pick me up a week after they narrowly lost out to Manchester City in the Premier League title race.

Salah and Liverpool will have to be content with lifting the FA and League Cup.

Salah is still an icon for millions in Egypt, where he often features on giant billboards across the capital, Cairo.

He often springs up on TV ads for everything from a national anti-drug campaign to promotions for soft drinks and luxury residences.