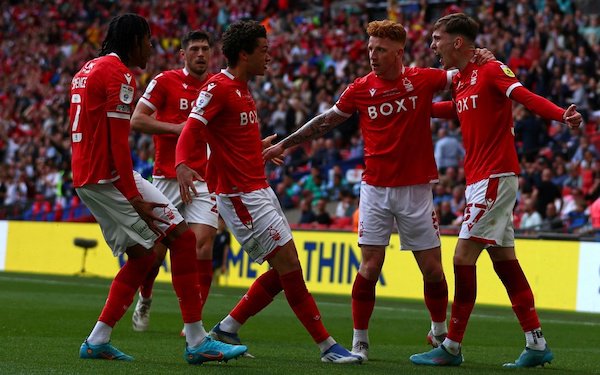 Ethan Horvath's Nottingham Forest clinched promotion to the Premier League for the first time in 23 years with a 1-0 win against Huddersfield in the Championship playoff final on Sunday.

Levi Colwill's own goal late in the first half at Wembley was enough for Steve Cooper's team to hit the jackpot in the most lucrative single match in soccer.

Promotion to the top-flight is estimated to be worth at least £170 million ($214 million) in increased revenue.

Forest will gratefully accept the huge financial windfall, but it was the relief at ending their long exile from English football's elite that spurred the frenzied scenes of celebration among their thousands of red and white-clad fans.

For the first time in the 21st century, Forest can look forward to welcoming the Premier League's elite to City Ground on the banks of the River Trent.

The promotion was a personal triumph for Cooper, who has revitalised Forest since replacing the sacked Chris Hughton in September.

Forest was bottom of the table after taking one point from their first seven games, but Cooper had the midas touch as he erased the bitter taste of his defeat with Swansea in last year's Championship playoff final against Brentford.

"I'm really pleased for the players and the supporters. Everybody connected with the football club deserves this today and we're now really looking forward to a positive future," Cooper said. "It's relief and pride. This isn't about me but it's changed my life, potentially anyway. We've brought Nottingham to Wembley today, we've taken over the place and here we are in the Premier League."