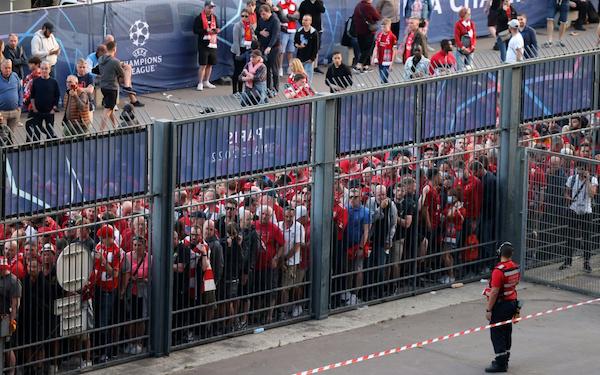 Liverpool supporter Daniel Austin was looking forward to a memorable night at the Champions League final against Real Madrid. Instead, "it became one of the worst experiences of my life," he told AFP.

What he and thousands of fans experienced on Saturday points to a series of worrying failings in the organization of Europe's top club final.

Fears of a crush. At 6 p.m., three hours before the scheduled kickoff, thousands of fans walking towards the Stade de France began to bunch together as the crowd was funnelled into narrow channels so tickets could be checked.

"We were near the front and it took us 30 minutes to get past this first checkpoint and there were massive crowds behind us. The crowds were moving a lot and you could tell people were getting nervous about a stampede or a crush," an AFP journalist in the midst of Real Madrid fans said.

The Spanish fans seemed, however, to reach the stadium without as much trouble as their Liverpool counterparts.

To the south of the Stade de France, thousands of red-shirted English fans who arrived on an RER surburban train were making slow progress.

"Police have for some reason parked... vans across the paths, making a broad walkway suddenly narrow, creating a bottleneck," tweeted Rob Draper, the chief football writer of British newspaper the Mail on Sunday, who was among the throng.

Austin, 27, was stuck for an hour in an underpass in 23-degree Celsius (73 degrees Fahrenheit) heat. "Then they decided the ticket checks didn't need to take place after all. That meant that young local lads began to dive through the crowd," he told AFP. 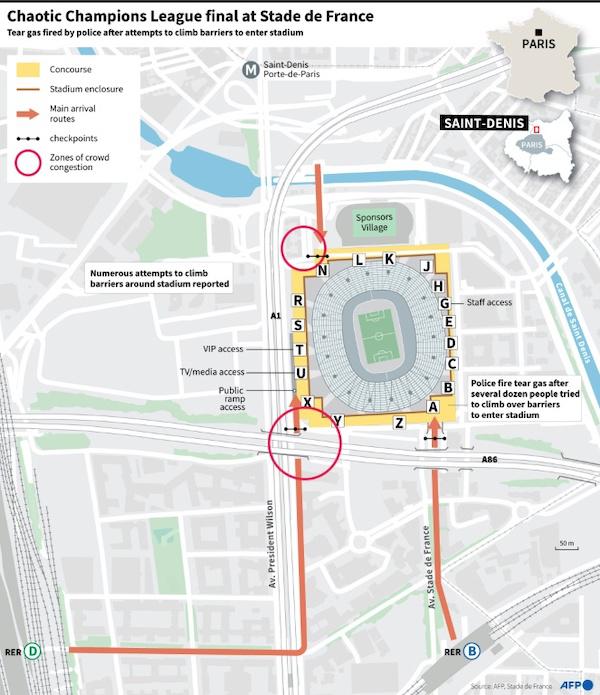 'Couldn't turn back.' He and a group of supporters reached Gate Z two and a half hours before the match was to begin -- one of the reasons Liverpool fans were angered by UEFA's claim the match was eventually delayed "due to the late arrival of fans". But the gate was locked and police looked on.

"The crowd soon built up behind us so much that we couldn't turn back. It was becoming really packed. I saw someone have a panic attack and people were taking gulps of air," Austin said.

Less than half an hour kickoff, thousands of supporters were still blocked outside the stadium. At that point, there were thousands of empty seats at the Liverpool end.

UEFA decided to delay the match by 15 minutes, and then another 15 minutes. It eventually started at 9:36 p.m.

"In the end, at 9:10 p.m., the police opened the gates and I was pushed forward into the stadium, too quickly. No one checked my ticket and it meant no one was sitting in their proper seat," Austin said. 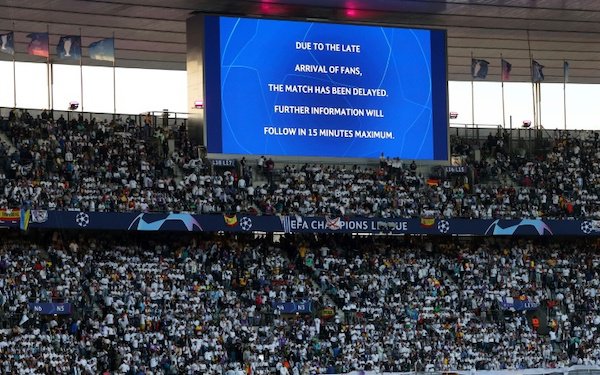 Chaos and tear gas. With police distracted, local French youths began scaling the fences into the stadium. Once over, they sprinted towards the steps up to the stands, pursued by police who marched them out.

"I'm going to try again. It's my dream to see this match," said one of them, who gave his name as Yacine.

"At 9:00pm, police decided to evacuate the stadium concourse. There was gas everywhere. Among the supporters waiting by the fences I saw a woman in her nineties who could barely walk and children screaming because the gas was hurting so much," said Pierre Barthelemy, a member of the Football Supporters Europe group at the stadium.

"You were supposed to protect us!" one supporter shouted at the police.

"I'm really stressed, I'm a teacher, I never got pepper sprayed," Pete Blades, 57, told AFP. "I haven't done anything wrong, I'm not a threat. The police pushed me at the door, that wasn't necessary, a girl's nose was bleeding. I was at the Hillsborough disaster and today it was exactly the same. They opened and shut the gates, he said, referring to the disaster that cost the lives of 97 people at a match in 1989. I'm so angry. France has let itself down."

Fake tickets? Liverpool Football Club said they were "hugely disappointed" by the treatment of their fans.

UEFA issued a statement during the match blaming "fake tickets which did not work in the turnstiles" for the problems in getting the crowd into the stadium.

In a tweet, France's Interior Minister Gerald Darmanin immediately blamed the Liverpool fans for the problems.

On Monday, he said there was a "massive, industrial-scale and organized fraud in fake tickets" and insisted there had been between 30,000 to 40,000 Liverpool fans with forged tickets or without tickets outside the Stade de France.

"This was the root cause of the delay to the match," Darmanin said.

The claims have outraged Liverpool fans. "It's a barefaced lie," said Austin. "It would not be physically possible to get that many people plus the 80,000 inside into the area around the stadium. The French police brought violence to a peaceful event and it was a minor miracle that no-one died."