Against the most formidable opponent of its 2022 World Cup preparations, the USA played to a scoreless stalemate against Uruguay on Sunday. While the U.S. attack faded as the game went on, central defender Walker Zimmermann provided the most impressive performance for the Americans. 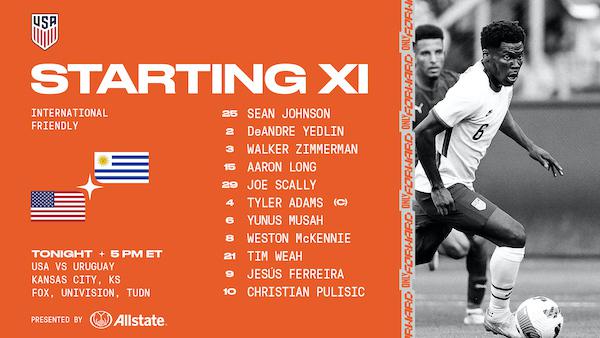 Sean Johnson's first test came on a powerful 14-yard shot straight to him by Manuel Ugarte that he deflected over the goal. In the second half, from two yards out, Mathías Olivera's shot banged off Johnson's shin. The final of his third saves came on a weak free kick down the middle by Darwin Nunez.

DeAndre Yedlin cleared a 10th-minute shot off the line by Diego Godín and his first cross created a half-chance for Jesus Ferreira. The right back failed to control a pass from Johnson that would have sent him on a flank attack and lost another ball before the first half ended. Uruguay's early threatening attacks came down the side of left back Joe Scally, who defended more solidly after the early phases. His midfield slide tackle late in the first half sparked a U.S. attack. Scally moved to right back when Antonee Robinson replaced Yedlin in the second half. Central defender Aaron Long's lackadaisical pass to Johnson in 42nd minute fortunately for the USA resulted only in an Uruguay corner kick. Long's central partner Walker Zimmerman headed clear back-to-back lethal corner kicks late in the first half. His second-half defending, such the late tackle that denied Diego Rossi a clear shot on goal, stifled Uruguayan forays as the backline play looked increasingly vulnerable. Among the most promising U.S. attacks came after Zimmerman's passes to Pulisic in the first half, including the sequence that ended with Jesus Ferreira's 19th-minute shot that was saved.

Recently recovered from injury, Weston McKennie played the first 45 minutes. His ambitious bicycle kick attempt went awry and his long-range left-footed shot went weakly far wide. He helped out Yedlin on defense and with a nifty back-heel pass combined with Pulisic on a one-two. After spending most of the first half defending, Yunus Musah became the most effective midfielder in transition play into the Uruguayan half. Tyler Adams, although mostly defense-minded, made a couple promising runs into Uruguayan territory. His long-range shot late in the first half went straight to the keeper. He bailed out the backline in the 76th minute.

Jesús Ferreira, notable for pressuring defenders and goalkeeper Fernando Muslera, had his first shot saved by Muslera. His second was an unsuccessful header from a hard-to-reach cross. Tim Weah failed to break through down the right wing after his low cross shortly kickoff was cleared. Christian Pulisic, who in the 12th minute intercepted a pass from Diego Godin and delivered a cross too high for Weah to connect well with, managed one shot — from a Musah pass in the second half — that went far wide. Besides the delivery to Ferreira, Pulisic failed to find gaps in the Uruguayan defense.

Erik Palmer-Brown got beat by Nunez ahead of the golden chance that unmarked Fernando Gorriaran sent into the stands. And Palmer-Brown lost Nunez in stoppage time when Edinson Cavani shot wide on Uruguay's best opportunity of the day. None of the attack-minded subs found a way to penetrate the Uruguayan defense. Left back Antonee Robinson's most promising flank foray ended a corner kick overhit by Pulisic.

NOTABLE: Uruguay entered the game on a five-game win streak during which it outscored its foes 11-1.