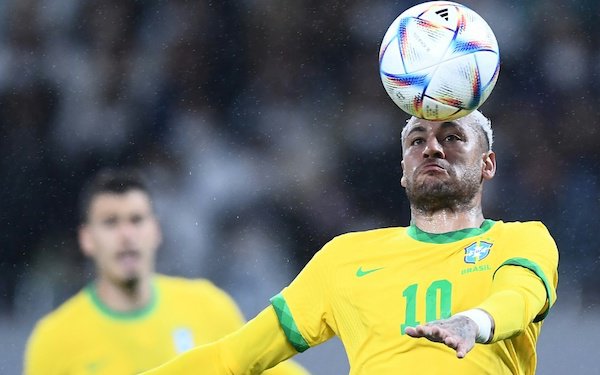 Brazil coach Tite said his team's "mentality" can make the difference at the World Cup, after it broke down a stubborn Japan in a 1-0 friendly win in Tokyo on Monday.

Neymar broke the deadlock from the penalty spot in the 77th minute, but only after Japan had frustrated Brazil with a dogged defensive effort.

Tite expects to encounter similar resistance at the World Cup in Qatar and he took heart from the way his team continued to plug away against Japan.

"It was a very high-level game, both teams showed their quality and it was very competitive," he said. "I said yesterday that this would be a game played at the same level as the World Cup, especially when it comes to mentality. We were determined to score and we kept looking for a goal, and that's what got us the win."

Tite shot down suggestions of a rift in the Brazil camp, branding reports that forwards Richarlison and Vinicius Junior had clashed in training on Saturday as "fake news".

The pair were filmed being separated by teammates -- a clip that Richarlison later posted on his Instagram page -- but it was not clear whether the incident was serious or a joke.

"There is a lot of fake news in the world, and people reporting that the players were fighting are telling lies," Tite said.

Richarlison came off the bench to win Brazil's penalty when Japan midfielder Wataru Endo clattered into him from behind.

Brazil looked like they were going to be in for an easier night when Lucas Paqueta hit the post in the second minute, following a cheeky back-heel flick from Neymar.

Instead, the home side steadied the ship and began to create chances of their own, with platinum blond winger Junya Ito causing problems down Brazil's left flank.

Goalkeeper Shuchi Gonda bailed Japan out several times and Coach Hajime Moriyasu was disappointed to take nothing from the game.

"We fought well, the players stuck at it and they never forgot to go for goal or attack," said Moriyasu, whose team has also qualified for the World Cup and will face Germany and Spain in Qatar. "It's a great pity we couldn't get the result."

Brazil arrived in Tokyo fresh off a 5-1 thrashing of South Korea in Seoul last week, where Neymar scored twice to take his international goal tally to 73.

His penalty against Japan took him to 74 -- just three short of the legendary Pele's record 77 goals for Brazil.

Brazil assistant coach Cesar Sampaio said the team's two-game tour of Asia had been a good "simulation" for the World Cup.

"Korea is more physical and has more movement than Japan, and Japan is very technical and good in defense," he said. "Moriyasu has built a very good mechanism for his team. They hadn't lost for eight games so he is doing a great job."

Moriyasu said there was "a lot to praise" in his own team's performance, days after beating Paraguay 4-1.

"The players never gave up, they kept on repeating the important things over and over," he said. "After weathering very heavy pressure in the first half, we managed to develop our own shape in the second. If we hadn't stuck at it like that, we could have been swept away," he added.