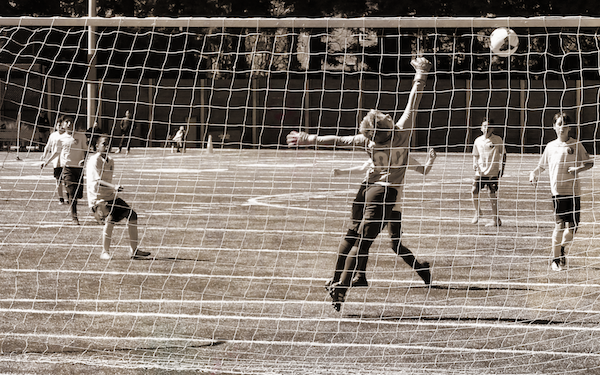 The U-12 boys coach knew his team should be winning this game, and his agitation was showing.

“Jack! You need to play that ball sooner!”

“How did that ball get through three of us!”

Everyone responded with quizzical looks. A slight pause.

“Gabe! You kept them onside!”

His team was dominating play but had no goals to show for it, and the misses were adding to his barely contained rage.

“GAAAAAAHHHH!!!!” he yelled after the opposing keeper made a tremendous save. He kicked at the ground to emphasize the point.

Another minute or so, another near-miss. Another kick at the ground.

Then he looked on the field and saw one of his strikers getting frustrated. Can’t have that.

Now why on earth would poor Teddy not be relaxed?

The coaching trend a few years ago was “Positive Coaching.” Some of us were required to go through training so we would be better at stressing the positive. Don’t just correct the mistakes. Reinforce the things they did right. “Catch them being good,” as emphasized in the title of a book by former women’s national team coach Tony DiCicco, longtime USSF sports psychologist Colleen Hacker and journalist Charles Salzberg. We’re also supposed to ask “leading questions,” helping the player realize other options for herself -- she might even come up with a better answer than we envisioned!

In some situations, of course, that’s difficult to do. Some classrooms have byzantine layers of rewarding students for going a few minutes without being completely disruptive. On a soccer field, coaches would lose their breath if they yelled encouragement at every completed pass or ball won in midfield.

But the concept is good. Kids sometimes do good things on a soccer field without realizing it, just as they make mistakes without understanding, and players need to hear it when they’ve made an improvement.

Imagine you’re in a math class. A student has a problem: 2x+2=6. The student guesses “three.” No, you say. Try again. The student says “two.”

Do you say anything? Or do you just leave the student hanging and move on, scanning the classroom for someone else who made a mistake?

Too many coaches are doing the latter. This spring, as I’ve re-emerged from winter hibernation to ref some games, I’m astounded by the coaches who keep up a constant stream of chatter when their players are making bad decisions or simply misplaying the ball, only to go silent when a sharp passing combination results in a goal.

For a recent story I wrote on referee abuse, I spoke with Janet Campbell of North Texas Soccer, who says she’s seen an uptick in cranky parents, coaches and players, perhaps a result of pent-up emotions from the pandemic.

Such things are difficult to quantify. I haven’t done a study in which I call coaches and ask, “So are you more of a jerk now than you were pre-COVID?”

And perhaps I’m just noticing anew what was true in the past as well. Travel coaches in my area have always struck me as a humorless lot intent on sucking the joy out of the game, especially when the result of that all-important U-12 game in early June, when the league championship had long been settled and everyone was still absorbing the results of tryouts for next year, was going against them.

To the frustrated coach’s credit, he was ever so slightly happier when his team took a 3-2 lead. We can only hope he doesn’t think the team turned things around because of his frustration. The game turned when the opposing team decided to spend the entire half playing direct, perhaps hoping the 52-year-old assistant ref with the dad bod would eventually be unable to keep up and would therefore miss an offside call. (Ha! It was only my first game of the day, so I was fine.) Coach Kick-the-Turf made a smart adjustment, keeping a defender back deep on goal kicks while trusting me to make the offside calls on anything else, and it was only a matter of time before his team’s possession edge turned into goals.

(Are we really talking about tactical adjustments in a pretty meaningless U-12 game, albeit one that’s in a relatively elite-ish league? My apologies.)

He still kept his team on the sideline long after the game, dissecting all of the things they did wrong, oblivious to the more relaxed girls game that followed, in which one kid got a chance to play goalkeeper for the very first time and had a blast, even if we had the blow the whistle when she picked up a backpass. Funny -- the coach didn’t yell at her, opting instead to give her a calm explanation of the rule.

No one’s saying this is easy. I’d be a liar if I said I never yelled anything less than positive in my days as a rec coach whose best players kept going to travel teams while other rec coaches assembled their juggernauts.

My favorite season as a coach above U-8 level was my last, when I co-coached a team with someone who had just moved here from Kyrgyzstan and was still picking up English. “Good!” was his most frequent sideline exclamation, yelled out in a clipped accent that made it sound like “Goot!” We won the league championship (admittedly, one game required a stern halftime talk from me, but it was delivered with the intent of reminding them they could play better), everyone had a great time, and his son made the high school varsity as a sophomore, not a common occurrence for players who were in rec league at U-14.

My biggest regret was that I didn’t take (and give) Coach Kick-the-Turf’s ironic advice: