For however frustrating it may have been for fans to watch the USA go 40 minutes without scoring against a team ranked 170th in the world, it patiently probed until finally breaking through for a 5-0 victory that featured a four-goal performance from 21-year-old Jesus Ferreira. 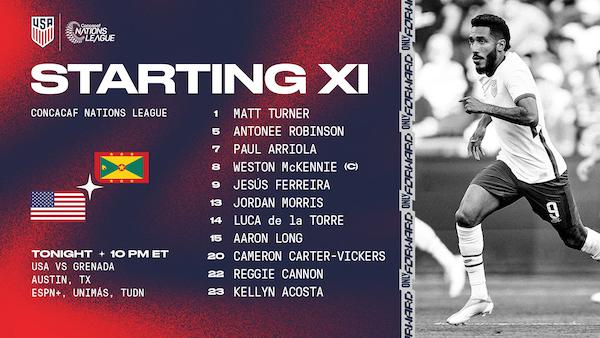 Matt Turner mostly watched the game from afar and accurately relaying a back pass in the first half marked his biggest challenge.

This wasn't a game to judge U.S. defenders for World Cup suitability, Grenada's last win coming a dozen games ago against Belize. Antonee Robinson's crosses weren't more precise than against tougher foes. Aaron Long was subbed at halftime and Cameron Carter-Vickers cruised through his 90 minutes without a test, as did right back Reggie Cannon.

A toothless Grenada gave Kellyn Acosta the luxury showing off his playmaking acumen, and he sprayed some crisp passes to the frontline. Why he still takes free kicks on goal for the USA without success since the one he scored five years ago is puzzling. His corner kicks weren't impressive either — until his clever delivery on the ground assisted Ferreira on the third goal. Before Grenada's adrenaline ran out, Weston McKennie, subbed at halftime, was the midfielder who created the most offense. But most impressive of the midfielders was Luca de la Torre for smooth passing that included the setup on Arriola's goal.

After Paul Arriola alertly pounced on a loose ball, the deflection of his pass set up Jesus Ferreira for his first goal. On Ferreira's second goal, the Arriola service was direct and precise, as was Ferreira's finish. Ferreira, who had shot wide twice in the first half from farther out, struck wonderfully for the hat trick. After much prep work, Arriola scored on his own for the fourth goal. Ferreira, whose opportunities in previous games were sparse and more of the half-chance sort, pounced on a close-range open goal shot to make it four for the night.

Malik Tillman shot wide on his chance to score. Brenden Aaronson set up the USA's final goal. Walker Zimmerman's entry for Long was a planned substitution. George Bello and Cristian Roldan saw their first action in the June window.