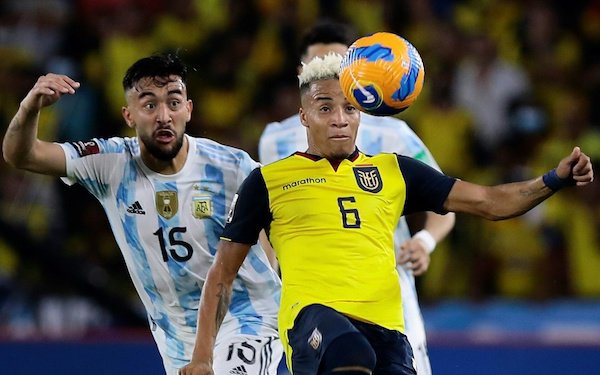 Ecuador kept its place in the 2022 World Cup after FIFA on Friday closed an inquiry sought by non-qualifying Chile into the eligibility of a key player.

The FIFA disciplinary committee said in a statement it had decided to "close the proceedings" against the Ecuador federation (FEF) after Chile disputed the nationality of fullback Byron Castillo.

If Chile had been successful, it would have leapfrogged Ecuador into direct World Cup qualification.

The Chilean federation (FFCh) said it would appeal the decision all the way to the Court of Arbitration for Sport if need be.

"The eloquent and substantiated evidence we showed was not enough. Surprisingly the ruling was not in our favor," FFCh president Pablo Milad told reporters in Santiago. "We are 1-0 down, but there is still the second half."

The FFCh last month lodged a complaint with FIFA against Ecuador over what it claimed was the "use of a fake birth certificate, false declaration of age and false nationality" in the case of Castillo. It claims to have evidence that the player is actually Colombian.

Under FIFA rules, a player cannot represent a country of which they do not hold nationality.

Castillo, 23, played in both Ecuador's World Cup qualifying matches against Chile: a 2-0 victory in Quito in September 2021 and a 0-0 draw in November.

FEF president Francisco Egas said Chile's allegations had "hurt us a lot" and did not rule out legal action.

"This is a subject to be analyzed by our lawyers," he told reporters.

Ecuador is in Group A with Qatar, the Netherlands and Senegal at the World Cup finals later this year.