MLS goes wildly off the rails for 90 disgraceful seconds

I have been enjoying MLS games so far this season: plenty of good, varied attacking play, plenty of individual brilliance ... and not much evidence of turgid defending, even among the teams that are struggling.

Take a look at the San Jose Earthquakes, for instance. They have only 15 points, which puts them next to bottom in the Western Conference. You can also see that only three teams in MLS have fewer points — Chicago on 11 (of course), and Kansas City (beset by injuries), bottom of the West with 13, and D.C. United with 14.

Grim times, then, for the Quakes. But not as grim as those stats.

Because there is another stat that shines rather a different light on San Jose. They have scored 25 goals in their 15 games. Only three other MLS teams have scored more — and not massively more. LAFC (top of the west) have 29, while Austin and Montreal each have 28.

With their scoring rate, San Jose’s next-to-last placing seems an aberration. I have watched most of their games and have been impressed. There are a lot of good players on the team, they are playing a lot of good soccer.

But they have given up 32 goals, more than any other MLS team. Kansas City, having allowed 28 goals, is the second worst defensive team in MLS).

I have no solution to the anomaly. I’m quite sure the army of tactical analysts do have an answer. It will be the obvious, the almost platitudinous, answer: The Quakes must spend more time and thought defending. Which would mean being less effective at the attacking end.

Whether such a reform ever actually works, I have no idea. Maybe there are stats somewhere that will give us the answer, though I have never seen them. I’d guess that, like most things in soccer, sometimes it works and sometimes it doesn’t. (There is already a hint — distasteful to me — that San Jose may be adopting the negative approach — it managed to shut out Nashville in its most recent game. But, for only the fourth time this season, it failed to score).

What I do know, is that it would be a great pity to see the Quakes’ bracing style reined in. I also know that poor referee decisions and VAR incompetence will not help San Jose.

Unfortunately for the Quakes they suffered both misfortunes in the space of just 90 seconds in their recent game against LAFC. An excellent game to watch, two attractive, high-scoring, teams who arrived at the hour mark with LAFC leading 3-2. That was when the Quakes’ right back Tommy Thompson burst forward into the LAFC penalty area and ... well, he was fouled, quite blatantly. My opinion, of course, but I’m totally certain that the replays support it. Thompson was tripped by LAFC’s Latif Blessing; then as Thompson was pitching forward, LAFC forward Cristian Arango arrived at full speed and clumsily barged into Thompson, making quite sure that he crashed to the ground. 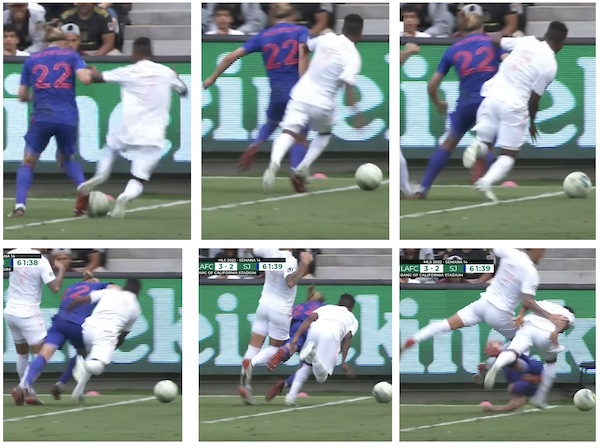 On the MLS web site’s “Instant Replay” feature Andrew Wiebe took a look at the incident and decided yes, it should have been a PK to San Jose.

The referee involved here was Ismail Elfath, arguably the dean of MLS referees, chosen to officiate at this year’s World Cup in Qatar. But Elfath does not look too good here. He was not in a good position to judge the “coming together” of the players - some 20-plus yards away, behind the play, and with at least one player possibly blocking some of his sightline.

But referees cannot always get their positioning right. That’s one of the reasons why we have Video Review. So where was the VAR when it was needed?

There is no evidence that the VAR intervened. For sure, referee Elfath did not consult the on-field monitor. No explanation of this lack of action occurs to me — the evidence of, at least, the suspicion of a foul on Thompson is simply too forcefully apparent to be ignored. And this is a penalty-kick situation, a category of incident among those which FIFA’s VAR protocol singles out as being liable to the VAR's review.

There is a further mystery involved. If, as Elfath ruled, Thompson was not fouled, then what caused him to plunge so precipitately to ground? Surely, by Elfath’s reasoning, he must have dived. So how come Elfath didn’t yellow-card him? 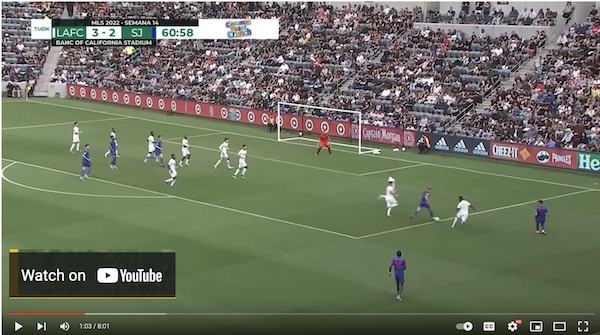 I must admit to having a personal interest in this incident. I began writing the SoccerTalk column in 1977, for the defunct SOCCER USA . The second column I wrote laid out my belief that soccer referees were in need of a program of official signals, which would require them to immediately identify which particular offense they were calling. That was 25 years ago. I have returned to the topic occasionally during those years, but the referees have managed, without too much trouble, to ignore my idea.

Maybe not quite. There has been some slight movement. The FIFA Rule Book does now include rather comical little drawings of a cartoon referee making 10 “approved” signals. As far as I can establish, their use is not mandatory. Which is just as well, for they are a hopelessly inadequate set. Nine of the 10 drawings show nothing more helpful than the referee raising an arm and pointing somewhere.

Laughable really — and that was the impression that referee Elfath produced in the incident described above, as he rather pathetically kept waving his arms about without ever really signaling anything. That do-nothing approach apparently satisfied Elfath and the VAR: no foul, no penalty kick, no dive, no yellow card. No nothing.

A pretty dismal showing, then. However, I can refer to a pleasing precedent — a recent one. Back in March, the referee boss in England, Mike Riley, publicly apologized to Everton for the failure of both the game referee and the VAR to award Everton a clear PK (it was made clear by TV replays) against Manchester City.

San Jose deserves at least that much. I believe there is more than adequate evidence to allege that San Jose should have had a penalty kick. Just as there is plenty of evidence pointing to faulty decisions by both the referee (deciding there was no foul) and by the VAR (failing to intervene).

A clear mea culpa from the head of MLS referees, Howard Webb, would be appropriate. But the incident occurred two weeks ago and, so far as I know, MLS has not been heard from. So there should be no holding of breath.