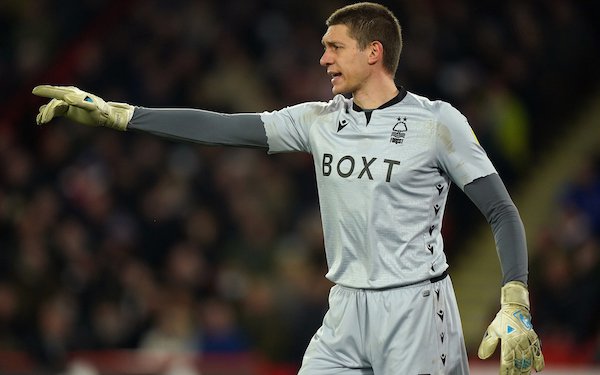 Ethan Horvath will start for the USA when it faces El Salvador in its second game in the 2022-23 Concacaf Nations League on Tuesday in San Salvador.

Horvath was a big reason the USA won the first edition, coming off the bench to replace injured Zack Steffen in the second half of the 2021 final against Mexico and make a game-saving stop on Andres Guardado's penalty kick late in overtime to preserve the 3-2 win.

He started in the USA's next game, a 4-0 friendly win over Costa Rica three days later, but hasn't played an international match since then.

He moved from Belgian champion Club Brugge to England's Nottingham Forest in the offseason to get more playing time, which did not pan out. Seven league games and four cup matches were the extent of his playing time at Forest, which won promotion to the Premier League thanks in part to the work of starting keeper Brice Samba.

Samba has said he wants to leave Forest, but Horvath isn't sure about his future. All he knows is he needs to be playing if he hopes to be picked for the U.S. World Cup team in November.

"There is the uncertainty and I don't 100% know what will happen," he said ahead of the El Salvador game. "Going into this summer period, my main objective is to play and I know that yes, the World Cup is coming around and that is part of the reason why I want to play, but to be honest, I just want to play again to feel that adrenaline and those butterflies and just that game-day feeling day in and day out. We'll see what happens. We're in close contact with Nottingham and whatever happens, happens there. The main objective is to play, with Nottingham or somewhere else."

Horvath is one of three goalkeepers in the USA's camp in June. Matt Turner started against Morocco (3-0 win) and Grenada (5-0 win) and Sean Johnson, who replaced Zack Steffen, also picked up a shutout against Uruguay (0-0).

"I's a healthy competition," Horvath of the goalkeeping corps. "If it's one of the other three playing, I want them to do good. It's a team sport. And at the end of the day, we all have the same objectives and the same goals. And in trainings, we have a good time. We have laughs, but at the same time, it's also a healthy competition. We get our work done. We want to make each other better."

Playing time is key, though. Johnson is playing at NYCFC in MLS, but Steffen (Manchester City) and Turner (Arsenal) will begin the preseason as backups at two of the biggest club in England.

"I don't a 100% know what will go on," Horvath said of his club situation, "but I think mine and everyone's main focus, going into these last couple months is, playing time and just getting as many games as possible before Gregg makes the final decisions."
americans abroad, men's national team, world cup
4 comments about "Ethan Horvath: 'I just want to play again'".
Read more comments >
Next story loading