What looked to be a scrappy, muddy slog of a game ended up rather entertaining after host El Salvador's 35th-minute goal set up the USA's dramatic quest to avoid its first (and only) loss to Los Cuscatlecos since a 1992 friendly. A red card for each team late in the game added to the excitement. Two players who entered with some 10 minutes left combined for the stoppage-time equalizer. The in-swinging cross from Luca de la Torre floated perfectly for Jordan Morris to head home for a result that fairly reflected the efforts of both teams. 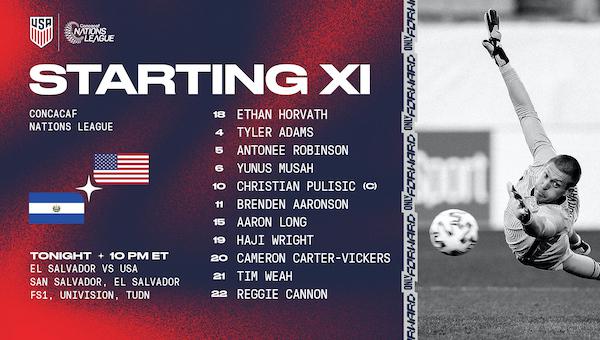 Ethan Horvath was super in last year's 2021 Concacaf Nations League final, but El Salvador's goal was the second time in his eight U.S. appearances that he lapsed badly. (His blunder vs. Portugal Nov. 14, 2017 was worse). The Salvadorans, who scored with a shot from the wing, failed to put another one on target, leaving Horvath with no chance to leave a better impression. All he could do was come out of his penalty area three times to meet Salvadoran long balls, and he controlled them. It will take impressive club performances to pull him back into the World Cup picture, even more than for the other keepers facing the same club playing time challenges.

Right back Reggie Cannon, who had a chance to interfere with Alexander Larin's goal-bound shot, struggled more on the marshy Estadio Cuscatlán field than his backline companions. His frustration showed with two late first-half fouls, the second of which earned him a caution that he had no reason to protest as he did. Left back Antonee Robinson's rate of over- and under-hitting passes wasn't much different than his percentage on pristine grass. He hit a nice cross-field pass that started a neat sequence of combination play in the 11th minute, but when the ball came back to him he mis-hit his cross. Robinson's frequent presence in the offensive half did contribute to the USA's pressure on the Salvadorans. Early on, a poorly positioned Cameron Carter-Vickers allowed a cross that created El Salvador's first chance, a header that went high. Carter-Vickers' central partner Aaron Long caught up to Nelson Bonilla despite the Salvadoran's head start in the 35th minute. He intercepted a few crosses and managed to complete some accurate mid-range passes.

Yunus Musah's second-half forays after he yielded goalkeeper Mario Gonzalez's first save, in the 24th minute, created El Salvador's biggest tests. His 59th-minute shot after flying through the Salvadoran half and a one-two with Tim Weah forced goalkeeper Gonzalez's toughest save. Gonzalez did well to stop Musah's 81st-minute free kick. That was awarded after Ronald Rodriguez was red-carded for denying Musah an obvious scoring opportunity. Tyler Adams misplayed balls in the first half and committed three of his four fouls within four minutes in the second half, the last getting a yellow card for unnecessarily wrestling with Darwin Cerén in midfield. Brenden Aaronson, subbed at halftime, saw plenty of the ball during his first-half appearance but couldn't find a path to the frontline with passing or dribbling. Defensively, he failed to prevent Kevin Reyes' cross-field ball to Larin on the goal.

With a bit more penalty area composure, Haji Wright could have at least have forced a save when he shot wide in the 31st minute after a nice pass from Christian Pulisic. On the right wing, Timothy Weah saw little of the ball as the USA pretty much ignored their right flank in the first half. He was notable for a mis-timed leaping kick that missed the ball but hit Bryan Tamacas in the head. (Weah's concern for Tamacas was commendable.) Pulisic, after under-hitting his early corner kicks and free kicks, got cleverer with them later in the game. He failed to get a shot on target but his persistence, which included fetching the ball in midfield, helped wear down the Salvadorans.

A VAR, not used for this game, may have reduced Paul Arriola's red to a yellow, but referee Cesar Ramos saw both Arriola's cleats in the air after his slide-tackle sent him to locker room in the 70th minute. Chest-puffing Weston McKennie nearly got baited into ruining his second-half appearance but on the ball was composed and his through pass to Jesus Ferreira created a chance that was blocked. McKennie hit some decent passes and his impressive dribbling in the 79th minute contributed the USA's late surge. His 90th-minute header from Pulisic's corner kick forced a good save. Luca de la Torre's short appearance again demonstrated he could be the sharpest passer on the squad. His assist on the fine header by Jordan Morris was the kind of delivery forwards crave.

TRIVIA. The tie extended the USA's unbeaten streak with El Salvador to 20 games, but marked their third straight tie in San Salvador following the World Cup qualifying ties last September (0-0) and in 2009 (2-2). The USA now has a 20-1-6 (W-L-T) record against Los Cuscatlecos.

NOTABLE: Antonee Robinson is the only player to appear in all nine U.S. matches in 2022, starting in eight.