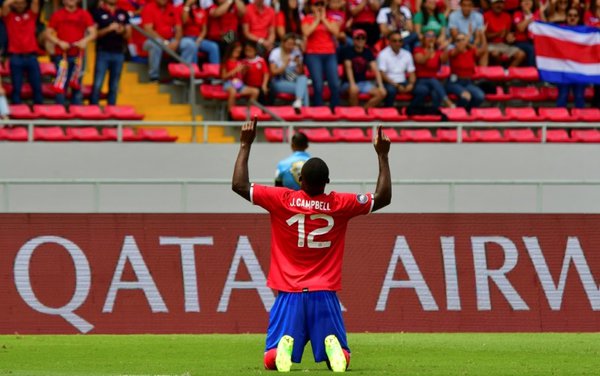 Costa Rica became the last team to qualify for the 202 World Cup as Joel Campbell's early goal gave the Ticos a nervy 1-0 win over New Zealand in a playoff on Tuesday.

Campbell netted in the third minute in Doha, and New Zealand, reduced to 10 men in the second half, could not find an equalizer despite dominating for long periods.

Costa Rica will face Germany, Spain and Japan in a tough Group E at the World Cup, which starts in Qatar in November. It will return to its third straight World Cup and sixth in total. Its best effort so far was a surprise run to the quarterfinals in 2014.

New Zealand striker Chris Wood had what he thought was an equalizer ruled out by VAR shortly before halftime at the Ahmad bin Ali Stadium due to a foul earlier in the move.

The Kiwis also saw Kosta Barbarouses sent off, barely eight minutes after coming on as a substitute, for a challenge on Costa Rica's Francisco Calvo. That decision was also changed by VAR after he had initially been shown a yellow card.

"We are incredibly disappointed, we are hurting," said New Zealand coach Danny Hay. "I thought we were by far the better team. There was one team that dominated."

He called the decision for the disallowed goal "atrocious" and said the referee should not have been in charge of the game.

Both sides had suffered badly from the pandemic upheaval. The whole Oceania qualifying group, that New Zealand won to reach this playoff, was held behind closed doors in Qatar this year because of the coronavirus. Costa Rica star Bryan Ruiz went down with Covid-19 two weeks before Tuesday's game and the team denied accusations that they played two infected players against Jamaica in January.

New Zealand's neighbor, Australia, took the 31st qualifying spot in the same stadium on Monday when it beat Peru 5-4 on penalties.