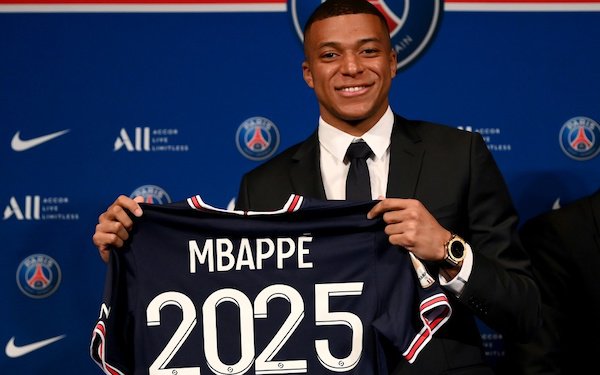 Real Madrid president Florentino Perez has claimed Kylian Mbappe decided to stay at Paris Saint-Germain because he was “confused” after being put under intense “political and economic pressure”.

But when asked about the possibility of Mbappe joining Real Madrid in the future, Perez kept the door open to the 23-year-old.

“This Mbappe is not my Mbappe,” Perez said. “But if he changes, who knows? Life takes a thousand turns.”

Mbappe stunned Real Madrid last month by rejecting a move to the Santiago Bernabeu Stadium in favor of signing a new three-year contract at PSG, with a reported salary of between 40 to 50 million euros ($41.6 million to $52 million) .

"They practically offered him the chance to be the leader, not only of a football team, but the management," Perez told the Spanish television program El Chiringuito on Wednesday. “We saw that it was not the Mbappe that we wanted to bring - but it was a result of the pressure he was under that he changed his dreams. If a kid is called by the president of a country, of course it affects him... that influenced him a lot. But you can succeed at Real Madrid, like [Zinedine] Zidane did, and also be a source of pride for the president of your country.”

Perez believes Mbappe was influenced most by French and Qatari political pressure, due to the reported involvement of French president Emmanuel Macron, as well as PSG president Nasser Al-Khelaifi, who is chairman of Qatar Sports Investments.

"I think the pressure that might have affected him the most was the politics," Perez said. "That, plus the money and the offer of leadership have made him change his mind. He had a hard time. When you get into a panic, you try to get out of that as quickly as possible, I can understand that. But what I can't understand is the King of Spain calling a Spanish club to tell him a player should stay.

"There are two states involved there, one is Qatar and the other is France," Perez continued. "I have been here since 2000 and I have never seen that before, that a president of a state calls a player. You can be a world-class player and not play in France, like Zidane or [Karim] Benzema.”

Asked for a second time about Mbappe joining in the future, Perez said: “I tell you calmly, that life is not over yet.”

Real Madrid had also been linked with a move for Erling Haaland at Borussia Dortmund, but by the time Mbappe chose to stay at PSG, Haaland had joined Manchester City.

"It had nothing to do with it. We already have the best center forward in the world [Benzema] so this situation was incompatible with Haaland,” Perez said.