The USA got goals from seven different players in addition to an own goal as it opened group play at the Concacaf U-20 Men's Championship with a 10-0 win over St. Kitts & Nevis.

• Scoring: The first two goals were scored after penalty kicks were awarded via Video Review, which Concacaf is using for the youth championship.


Paxten Aaronson came off the bench to score two goals in three minutes, and Niko Tsakiris, the son of assistant coach Shaun Tsakiris, added his second goal to complete the scoring in the 69th minute. Tsakiris' first goal on a penalty kick completed a blitz of three goals in first-half stoppage time.

The best goal was scored by right back Maurico Cuevas with a shot from the side of the penalty kick into the far corner to make it 5-0.

"The team did a great job today, taking care of business," said Cuevas, the U.S. captain and only holdover from the team that won the 2018 Concacaf U-20 title. "It came out and got a good start and stayed patient."

• Notable: The USA has won 14 straight games in the Concacaf under-20 championship, including one shootout win over Honduras in the 2017 tournament's championship game.

* Elsewhere: Cuba beat Canada, 1-0, in Saturday's other Group A game. The Cuban goalscorer Kevin Martín finished the game in goal because goalkeeper Ismael Morgado was red carded in the 75th minute and Cuba had already used its five subs. 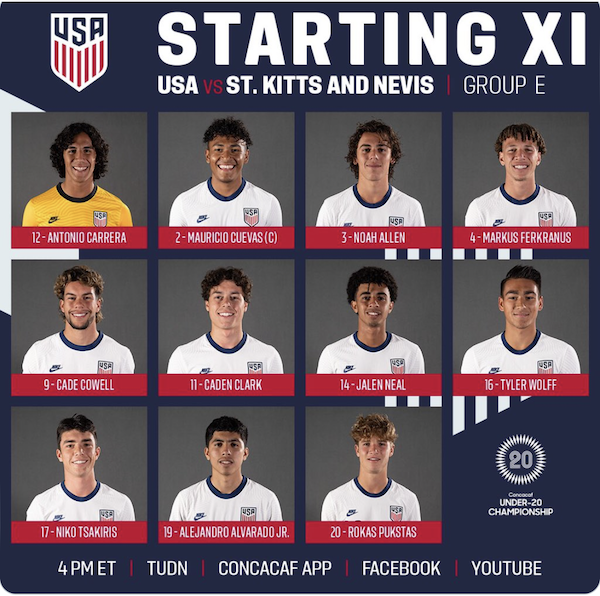