The USA outshot the Canadians, 18-5, but gifted them an own goal and tied 2-2 on Monday at the 2022 Concacaf Under-20 Championship after opening Group E play with a 10-0 win over St. Kitts & Nevis.

Coach Mikey Varas' team came back twice on the muddy field in the Honduran capital of Tegucigalpa. Lowell Wright squeezed through defenders Mauricio Cuevas and Brandan Craig for a shot that gave Canada a 15th minute lead against the run of play.

Shots hit wide or weakly prevented the USA from capitalizing on waves of opportunities until Jack McGlynn's wonderfully hit 23-yard shot in the 53rd minute.

The Americans made eight changes from its opener — Markus Ferkranus, Cuevas and Cade Cowell staying in the starting lineup. Their second-half pressuring following McGlynn's strike seemed to promise the go-ahead strike, but in the 69th minute, defender Michael Halliday headed a Canadian cross past into his own goal.

Cowell came up with the 72nd-minute equalizer and the Canadians earned their first point of the tournament as the USA struggled penetrate their crowded defense.

The tie guaranteed the USA's passage to the round of 16 as the top three teams of each group advance. A third-place finish, however, could make possible a quarterfinal meeting with Mexico, while a first- or second-place finish will likely keep the USA on the other side the bracket from El Tri but with host Honduras, which has knocked the USA out of the last two Olympics in the semifinals of Olympic qualifying.

The 2022 Concacaf Under-20 Championship serves as qualifying for both the 2013 Under-20 World Cup (four quarterfinal winners advance) and 2024 Olympics (two semifinal winners go to France).

• Elsewhere: Cuba followed up on its 1-0 upset of Canada with a 6-0 win over St. Kitts & Nevis to take first place in Group E ahead the Wednesday group-stage finale. 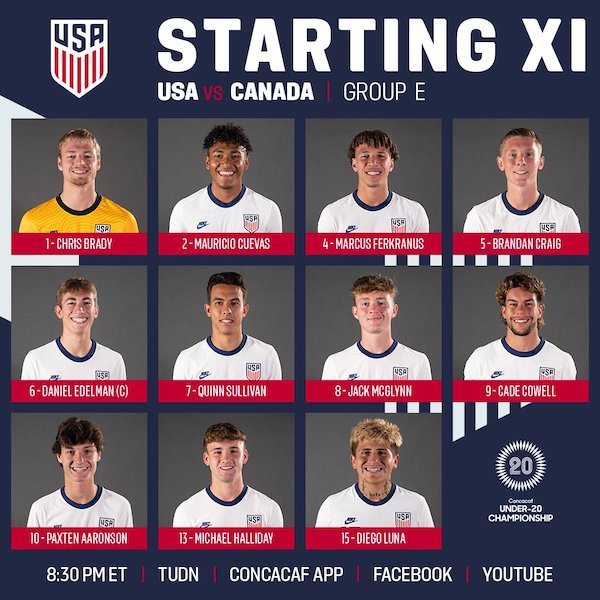